An All-22 film breakdown of Brian Orakpo's performance vs. Atlanta Falcons (1st Half)

This week's breakdowns were done upon request. I will be taking a look at our free-agent linebackers-to-be, Brian Orakpo and Perry Riley, and their performance against the Atlanta Falcons. I will break down each players game into two articles (1st half and 2nd half) so as not to stretch the articles too long. First up, Brian Orakpo in the first half vs. Falcons. 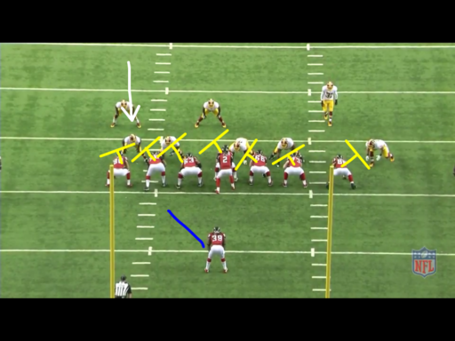 Falcons are going to run a stretch left here. Orakpo (white arrow) is set on left side of the formation. 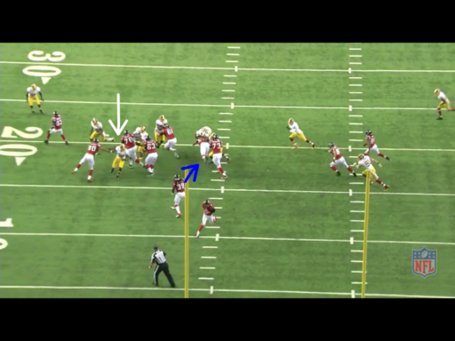 They have a Tight End blocking Orakpo. Orakpo easily separates from him and forces Steve Jackson to cut back. 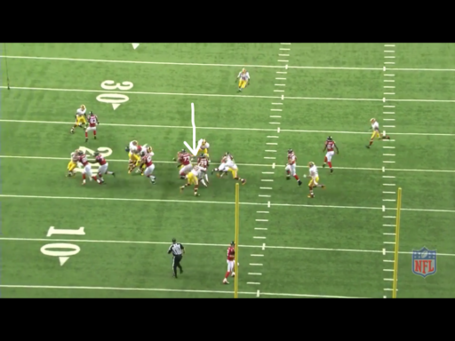 Orakpo is able to catch him from behind. Gain of 4 yards. 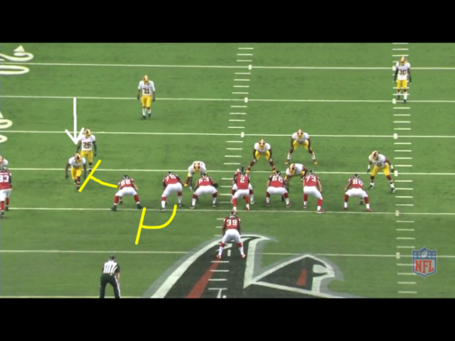 ATL is going to use Tony Gonzalez here to "chip" Orakpo and leave him for the LT to block. 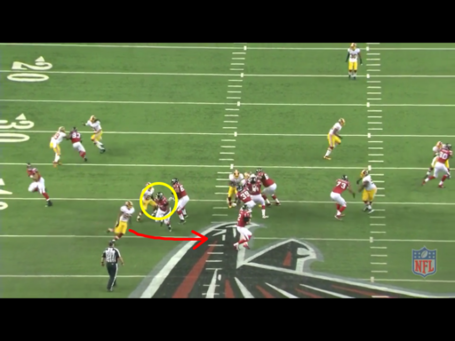 Orakpo gets a great jump the snap and Gonzalez doesn't get a good chip on him. Orakpo goes around LT instead of through. 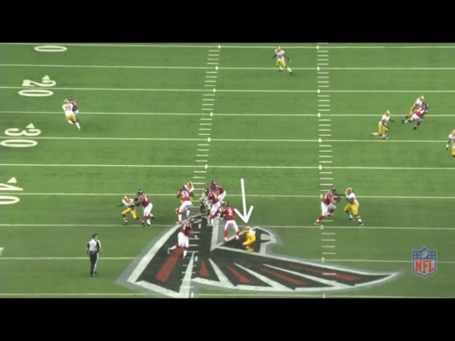 Going around the LT causes Orakpo to take a bad angle to Matt Ryan and miss the sack. 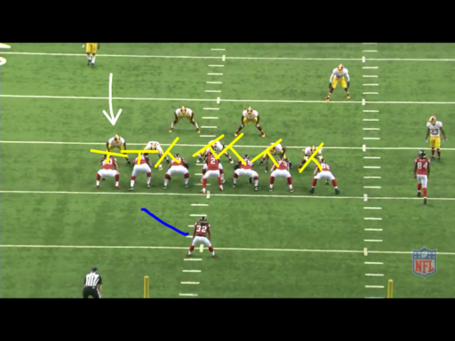 This play is nearly identical to the first one I broke down. Falcons are running a zone left towards Orakpo. 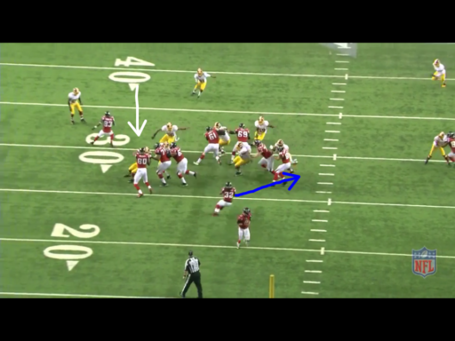 The Tight End does a better job blocking this time but Orakpo still forces him back, sets the edge, and forces Jacquizz Rodgers to cut it back. The play results in a gain of 2 yards. 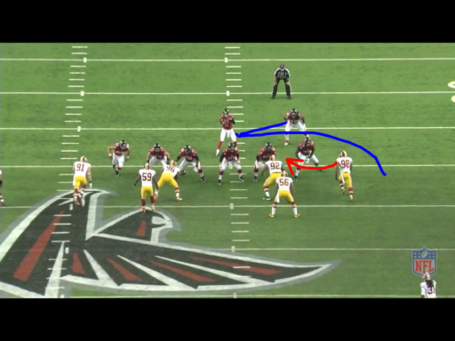 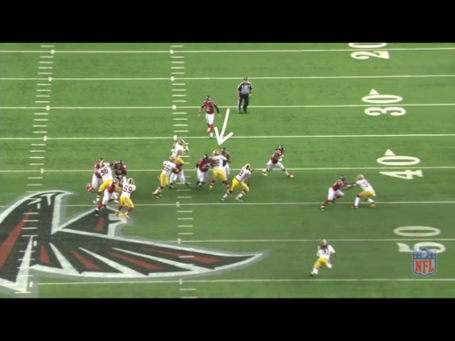 Orakpo gets sealed inside and the RB is able to break it outside. 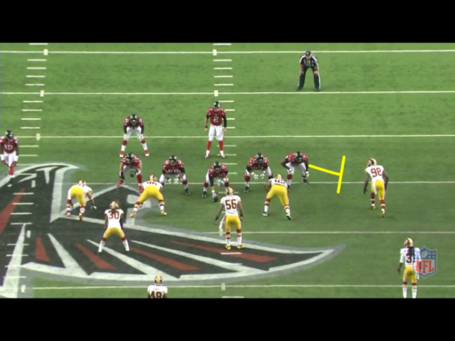 ATL with a pass play from Shotgun. Orakpo on your right. 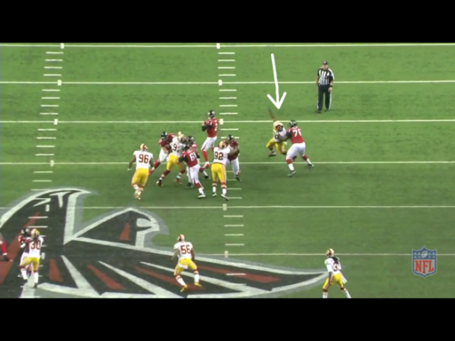 Orakpo does a good job here of "dipping and ripping" (dips his shoulder under OTs block and rips his arm up to get OTs hands off him). He draws an offensive holding penalty. 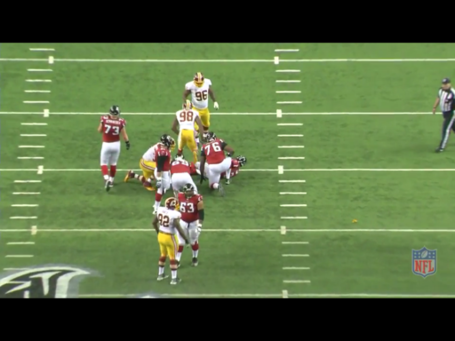 That penalty was declined of course, because Orakpo was able to shed the hold and get the sack anyway. Interior pressure helped. Loss of 9 on the play. 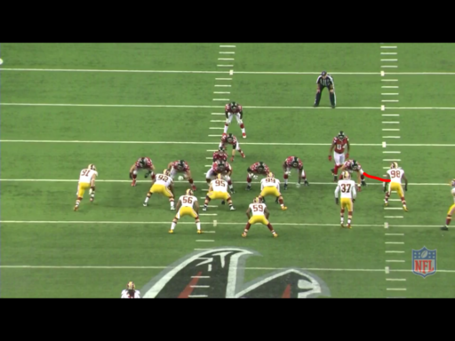 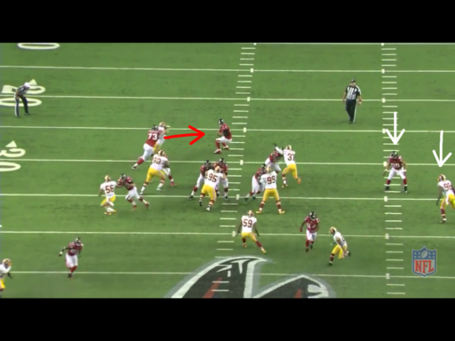 Gonzalez stays in to block so Orakpo just mirrors him. Meanwhile, Ryan Kerrigan is bending the edge and bringing the heat on the other side. Kerrigan gets a sack/fumble. 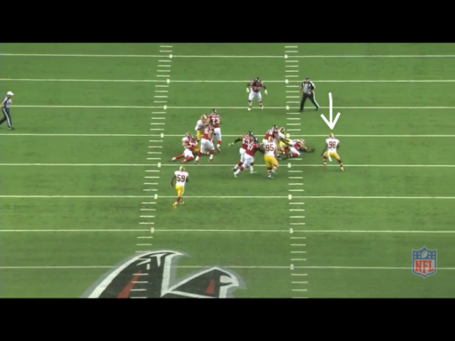 The ball pops out and Orakpo just happens to be standing there from his previous "mirror coverage" and recovers the fumble. Sometimes it's better to be luck than good. 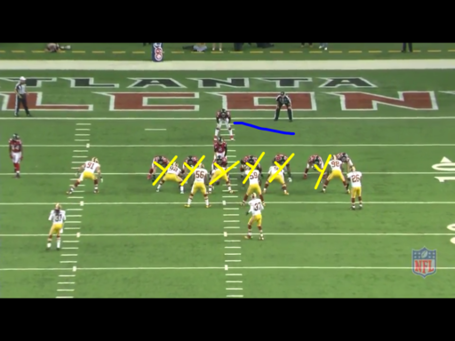 This might be my favorite Orakpo play from this past Sunday. ATL running that zone left again. 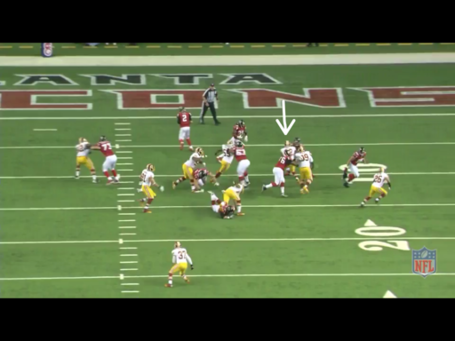 Orakpo sets the edge again and forces Steve Jackson to go around him to get to the outside. 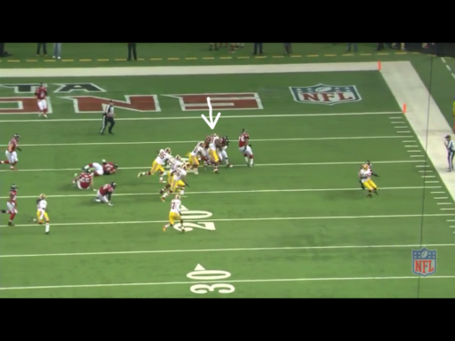 Orakpo keeps his outside shoulder free and, while still getting blocked, holds up S.Jax with one arm and makes the tackle. 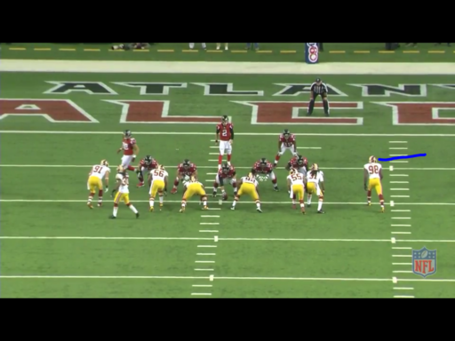 Here's a pass play by ATL backed up in their own zone. Orakpo looks out at the slot WR. 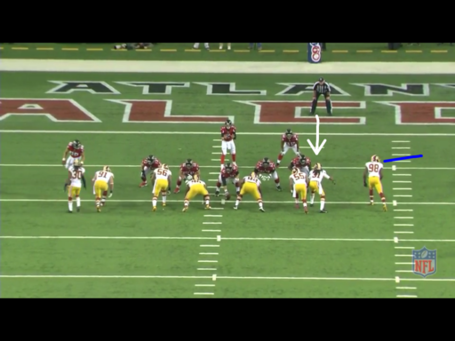 Don't know if Redskins heard an audible or it was formation recognition from film, but something gave the play away. Brandon Meriweather points out the slot WR also and Orakpo looks again. 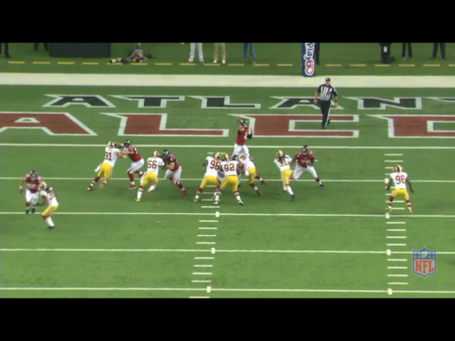 Ryan hikes the ball and immediately gets it out of his hands to the slot WR. Orakpo doesn't rush. 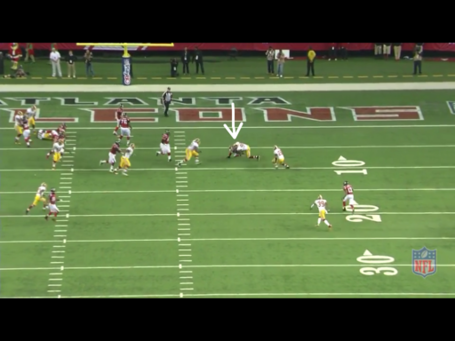 Orakpo tackles the receiver for a loss of one yard on the play.

That is it for first half. Check back to see the film breakdown of Orakpo's second half coupled with a question I pose.