Just as Robert Griffin III was forced to sit on the sidelines and watch as his troops fell to the Falcons in Atlanta, the Hump Day Pick'em staff and I were relegated to watching another week of picks go wrong for us.  Only instead of having the option to take our chances in overtime or go for two for the win, our only option was ironclad defeat.  We finished with a sad record of 7-9 for the week, giving us a total of 7 lousy points.  Could it possibly be enough to defeat the grasping contestants?  Here are the Week 15 results:

Congrats to SkinsNJ!!!!!  This is your third win of the season and now I'm getting annoyed.  Just kidding, I am happy to send prizes up your way on a semi-regular basis.  I do not need you to send me your address as I now have it memorized and will get your prize right out to you.

With another sorry week in the books, my season record is 100-118-7 and an overall losing season seems inevitable.  However, filled with a never-say-quit attitude and a lot of NyQuil, we press on to Week 16.

Miami Dolphins (-2.5) at Buffalo Bills: The team formerly known as the Team of Destiny continues to steamroll their opponents in a Non-Team-of-Destiny like fashion.  I actually feel sorry for the Bills here.  Pick:  Dolphins (-2.5)

New Orleans Saints (+3) at Carolina Panthers: No one can accuse the Saints (only 3-4 on the road) of not living up to their moniker, for they bring charity and tidings of great joy to whomever they visit.  Pick:  Panthers (-3)

Dallas Cowboys (-3) at Washington Redskins: My personal best case scenario for this game would be to see Romo sacked 10 times and Dez Bryant run back into the locker room midway through the third quarter so no one can see him cry.  Pick:  Redskins (+3)

Tampa Bay Buccaneers (+5.5) at St. Louis Rams: In a cost cutting move that also serves as a network experiment, Fox is going to broadcast this game without any announcers and see if anyone notices.  Pick: Rams (-5.5)

Chicago Bears (+3) at Philadelphia Eagles: This game has been flexed to Sunday Night Football.  Not so much because of the playoff implications, but more so because Bob Costas had a taste for a steak and cheese sub.  Pick: Eagles (-3)

Cleveland Browns (+2.5) at New York Jets: With the Jets now officially eliminated from the playoffs, the energy level at this game is expected to reach heights not seen in the Meadowlands since the Sinead O'Connor concert of '86.  Pick: Browns (+2.5)

Indianapolis Colts (+6.5) at Kansas City Chiefs: With the Chiefs battling for the #1 seed in the AFC, the energy level at this game is expected to reach heights not seen in Kansas City since Guy Fieri visited Smokin' Guns BBQ in 2010.  Pick: Chiefs (-6.5)

Minnesota Vikings (+7) at Cincinnati Bengals: The Bengals must be getting nervous as the Ravens keep knocking at their chamber door for the division lead with two games remaining.  It's kind of like that classic Simpson's Halloween episode where that raven keeps knocking on that guy's door.  Pick: Bengals (-7)

Denver Broncos (-10.5) at Houston Texans: This week, Peyton Manning reiterated that he is completely fine with playing in the cold weather and wished this game could be played in the cold so he could keep proving everyone wrong.  Pick:  Broncos (-10.5)

Tennessee Titans (-5.5) at Jacksonville Jaguars: With these squads now just playing out the string, coaches of both teams have decided to play only three quarters and then cut out early for pizza.  Pick:  Jaguars (+5.5)

Arizona Cardinals (+10) at Seattle Seahawks: All I'm asking for this holiday season is for peace on Earth, all the children of the world to be happy, and for the Seahawks to not win the Super Bowl.  Pick: Seahawks (-10)

New York Giants (+9.5) at Detroit Lions: In a weird coincidence, 9.5 is not only the line but also the number of interceptions I expect Eli to throw in this game.  Pick:  Lions (-9.5)

New England Patriots (+1) at Baltimore Ravens: Even though there are playoff implications in this game as well, it was moved out of Sunday Night Football and will now be played at 4:25 at CBS.  The mayor of Baltimore petitioned NBC and Bob Costas, sending him a letter and photos of the local steak and cheese sub restaurants, but to no avail.  Pick:  Patriots (+1)

Atlanta Falcons (+12) at San Francisco 49ers: I can't think of a better way to wrap up another stellar season of Monday Night Football.  Pick:  49ers (-12)

So there are my Week 16 picks.  The winner this week will have this fabulous prize to look forward to: 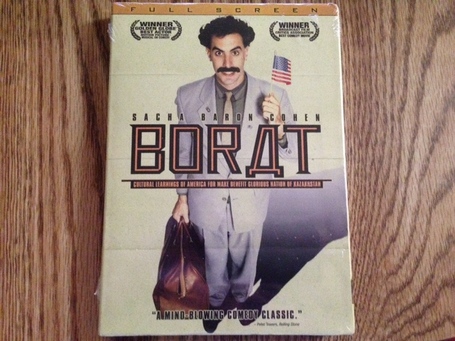 That's right - the Sacha Baron Cohen film that Peter Travers of Rolling Stone called "A mind-blowing comedy classic."  It includes special features like deleted scenes and a music infomercial.  Also, it's the full screen version so you won't have any of those pesky black strips at the top and bottom of your television that nobody likes.