The staff and I had a nerve-wracking, yet (in the end) fantastic, time watching the Redskins beat the Chargers on Sunday. All the while we had our eye on the RedZone Channel as well in the hopes of having the elusive, perfect Sunday. We hoped to team a Redskins' victory with a Hump Day Pick'em victory, but in a vicious stroke of déjà vu, I finished for the second week in a row with a record of 6-7, giving me a total of six points again. Would it be enough this time around to hold off the gluttonous contestants? Here were the Week 9 results:

Congrats to Redskins329!!! He went from worst to first in one week for his second Hump Day Pick'em win! Please email me your address again and I will get your prize right out to you. So as not to be creepy, we don't keep contestants' addresses on file. Usually.

After last week's underwhelming results, my overall record is 55-76-3. Now, on to the greener pastures of Week 10.

Washington Redskins (-2.5) at Minnesota Vikings: In my stone cold fantasy lock of the week, look for Redskins fullback Darrel Young to get another three to four touchdowns in Minnesota. Pick: Redskins (-2.5)

Jacksonville Jaguars (+13) at Tennessee Titans: CBS execs can breathe a sigh of relief now that the Jaguars, otherwise known as "ratings gold", are back from their bye week. Pick: Titans (-13)

Buffalo Bills (+3.5) at Pittsburgh Steelers: The Steelers are catching the Bills at the worst possible time. With Thad Lewis now healthy, EJ Manuel possibly back this week and the team coming off a loss, Buffalo is piping mad and so loaded at quarterback they felt comfortable cutting Matt Flynn. Pick: Steelers (-3.5)

Oakland Raiders (+7) at New York Giants: After the Raiders allowed Nick Foles to throw seven touchdowns in Oakland last week, Giants quarterback Eli Manning may have overstepped when he told local New York media they could expect ten touchdowns from him this Sunday. Pick: Giants (-7)

St. Louis Rams (+10) at Indianapolis Colts: Colts quarterback Andrew Luck sent Rams quarterback Kellen Clemens a text message that said "What's it like being the QB of a team that wishes you weren't playing?" He softened the vibe of the text though by adding ";-)" at the end. Pick: Colts (-10)

Seattle Seahawks (-6) at Atlanta Falcons: The NFL is not happy that Falcons coaches have been wearing t-shirts that say "Do it for Clowney". Pick: Seahawks (-6)

Cincinnati Bengals (-1.5) at Baltimore Ravens: The 3-5 Ravens need this win to salvage their season. The Bengals need it to maintain their status among the elite teams that no one believes will actually win the championship. Pick: Ravens (+1.5)

Detroit Lions (-2.5) at Chicago Bears: The Bears defensive unit was somewhat disappointed when they saw head coach Marc Trestman's simple two step gameplan for getting a win against the Lions. Step one was "Break Matthew Stafford's shoulder". Step two was "Win". Pick: Lions (-2.5)

Carolina Panthers (+6) at San Francisco 49ers: Some people say Colin Kaepernick and Cam Newton are arrogant. I say they are egocentric. Pick: 49ers (-6)

Houston Texans (+3) at Arizona Cardinals: After only one game, Texans quarterback Case Keenum leads the league in fans with shattered hopes. Pick: Texans (+3)

Dallas Cowboys (+7) at New Orleans Saints: The Saints will most likely be looking to bait Cowboys wide receiver Dez Bryant into having another team-distracting temper tantrum by playing defense on him. Pick: Saints (-7)

Miami Dolphins (-3) at Tampa Bay Buccaneers: You know things aren't going well for the Bucs' head coach when you Google his name and "Greg Schiano sucks" is the number two option on the search list. On the bright side, "Greg Schiano fired" is all the way down at number four. Pick: Dolphins (-3)

So there are my Week 10 picks. The winner this week will have this fabulous prize to look forward to: 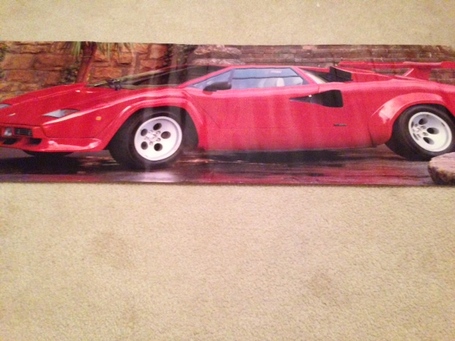 That's right - this amazing and oversized six-foot long Lamborghini poster from the ‘80's that is still cool today!