Welcome to the Week 13 Thanksgiving Special Holiday Edition Extravaganza!!!  With the Hump Day Pick'em staff's favorite holiday coming up, we like to change things up quit a bit this week.  And when I say quite a bit, I mean not much at all.  However, you may notice certain things like pictures and prizes different than normal.  Enjoy!!!

In another disastrous weekend, the Redskins embarrassed themselves on Monday Night Football in a loss to the San Francisco 49ers, and I followed suit with a pathetic 5-9 record in the Hump Day Pick'em.  That gave me a woeful 5 points for the week.  Could that possibly be enough to hold off the intemperate contestants?   Here were the Week 12 results:

Congrats to SkinsNJ!!!!!  This is his second victory of the season, which is two more than I can claim.  Please send me your address and I will get your prize right out to you.

Adding last week's record to my season record brings me to a repugnant total of 73-97-7.  Indeed, these are lean times for me and the Hump Day Pick'em staff.  However, with the promise of the holidays approaching, we will venture on, undaunted, to Week 13.

Green Bay Packers (+6) at Detroit Lions: The last time Matt Flynn faced the Lions as the quarterback of the Packers, he threw for 480 yards and six touchdowns.  When asked about his expectations coming into this game, he stated that the past was the past, and right now he is just focusing on using the opportunity to score another big team-killing contract.  Pick: Lions (-6)

Oakland Raiders (+9.5) at Dallas Cowboys: Never before have I been so anxious to see Matt McGloin eat a Turducken on national TV.  Pick:  Raiders (+9.5)

Pittsburgh Steelers (+3) at Baltimore Ravens: In the Thanksgiving Day nightcap, the NFL Network has announced they will be playing more GoDaddy.com commercials than usual in the hopes of keeping turkey-stuffed men from falling asleep on their couches.  Pick:  Ravens (-3)

Tennessee Titans (+4) at Indianapolis Colts: The Titans have not won in Indianapolis since 2007, and a victory this week would put them only one game behind the Colts for first place in the AFC South.  Showing his Stanford math skills, Colts quarterback Andrew Luck was quick to point out that on the flip side, a loss by the Titans would move them three or four games back, or whatever.  Pick:  Colts (-4)

Denver Broncos (-4.5) at Kansas City Chiefs: After already losing on the road to Denver this season, the Chiefs only had to wait a couple of weeks before they could lose to them at home as well.  Pick: Broncos (-4.5)

Jacksonville Jaguars (+7) at Cleveland Browns: It appears that Brandon Weeden will get the start for Cleveland as Jason Campbell is dealing with a myriad of injuries.  In preparation, Browns' management has taken down the "Campbell's Corner" posters at FirstEnergy Stadium and is debating whether or not they should put back up the "Weeden Rocks: The Future Is Now" signs.  Pick:  Jaguars (+7)

Tampa Bay Buccaneers (+8) at Carolina Panthers: The Bucs have won three straight and head coach Greg Schiano has been stressing to the team that they are undefeated this season if you don't factor in those first eight games.  Pick: Buccaneers (+8)

Chicago Bears (+1) at Minnesota Vikings: Bears quarterback Josh McCown has earned as many victories (two) in three games as the Vikings have in eleven.  Pick: Bears (+1)

Arizona Cardinals (+3.5) at Philadelphia Eagles: The biggest question facing Nick Foles coming back from the bye week was how he can maintain his edge as the starter in Philadelphia over a healthy Michael Vick while continuing to be an active member of pop supergroup One Direction.  Pick: Cardinals (+3.5)

Miami Dolphins (+1.5) at New York Jets: Alas, the stench created by being chosen originally as my Team of Destiny has lingered for the Dolphins.  My apologies.  Pick:  Dolphins (+1.5)

Atlanta Falcons (+3.5) at Buffalo Bills: Just as the NFL did in England, they are sending the best of the best to represent the league in Canada.  Pick:  Bills (-3.5)

St. Louis Rams (+9.5) at San Francisco 49ers: Being the numbers guy that I am, I have noticed a trend with the Rams: Every time they have won two games in a row this year, they have followed that up with three straight losses.  Numbers don't lie.  Pick:  49ers (-9.5)

New England Patriots (-7.5) at Houston Texans: I have also noticed that every time the Texans have lost this season, they have followed that up with another loss.  Thanks, science.  Pick:  Patriots (-7.5)

Cincinnati Bengals (+1) at San Diego Chargers: After their victory last week, the Chargers find themselves tied with five other teams who are all vying for a wild card birth in the AFC.  The Bengals, meanwhile, should be starting their annual collapse any day now.  Pick:  Chargers (-1)

New York Giants (-1.5) at Washington Redskins: The Redskins still have a chance.  If they play their cards right the rest of the season, they can still lock down the first pick of the second round in the 2014 draft.  Pick:  Redskins (+1.5)

So there are my Week 13 Thanksgiving Special Holiday Edition Extravaganza picks.  The winner this week will have this fabulous prize to look forward to: 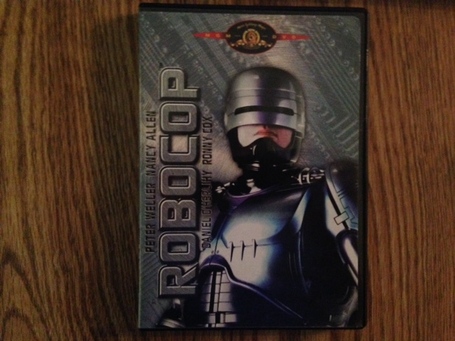 That's right - the vintage 1987 classic action flick Robocop, starring Peter Weller and Nancy Allen.  Before you see the new version that is scheduled for release in February of 2014, you owe it to yourself to pull out the old DVD player and watch the original.