An All-22 film breakdown of issues in the passing game during the 2nd half of the game vs. Eagles.

Continuing where I left off, this breakdown will be a little longer than the last one for an obvious reason; we were down by 24 so there was more passing. With that being said, I hope I don't lose your attention. 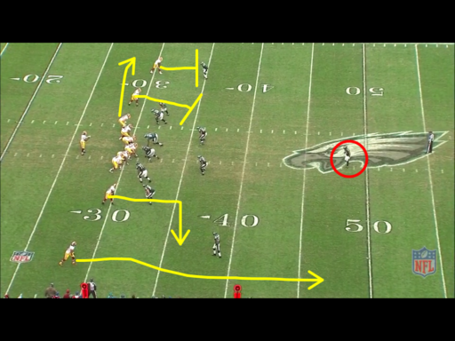 This is a screen pass to Logan Paulsen. He's running a bubble route at the top with two blockers out in front. PHI is in Cover 1 Man. 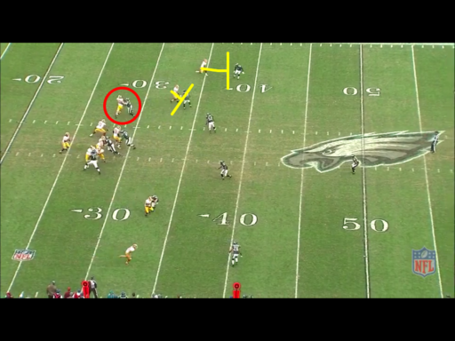 When PHI defender jams Paulsen, Robert Griffin III looks for another option, but there really isn't any. 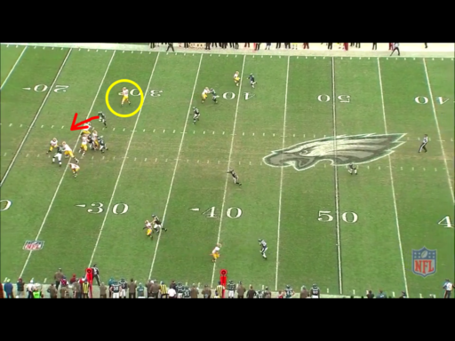 PHI tricks RG3 because the guy who jammed Paulsen doesn't actually have Paulsen in coverage. The LB in the middle of the field does. That PHI defender was just chipping him. Paulsen is now open but RG3 is already looking elsewhere. 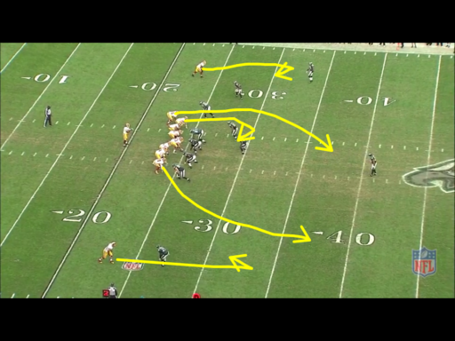 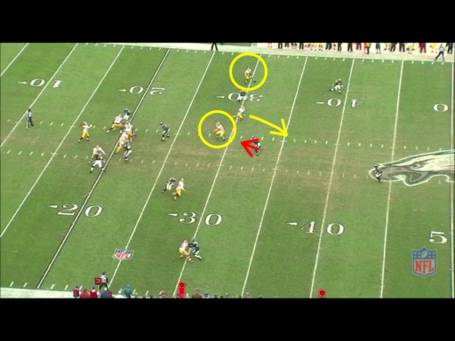 RG3 hits the top of his drop and is ready to throw. He has Paulsen open on a hitch route which draws the MLB up and has Darrel Yound running a post into vacated zone (Garcon is also open at the top of the screen but that's irrelevant because Griffin's first read is open). 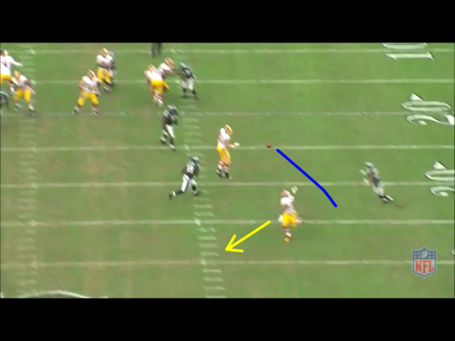 Paulsen jumps for the ball but it's over his head and the pass is behind D.Young who is running into vacated zone. Incomplete pass. 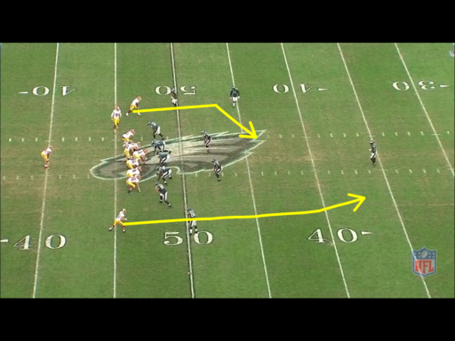 Here's a 2-man route with Aldrick Robinson (top) and Nick Williams (bottom). PHI is in a Cover-2 Zone. WSH is looking to hit backside post off of play-action. 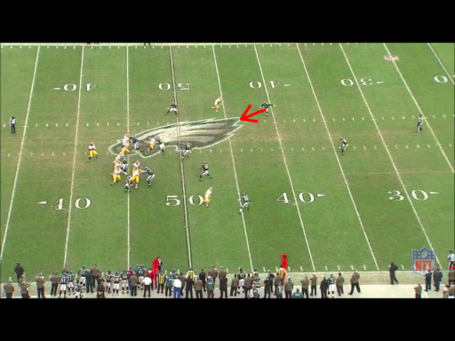 The safety, who is responsible for the deep half of the field, JUMPS the post route. I don't know why this isn't an automatic check to a fly route. 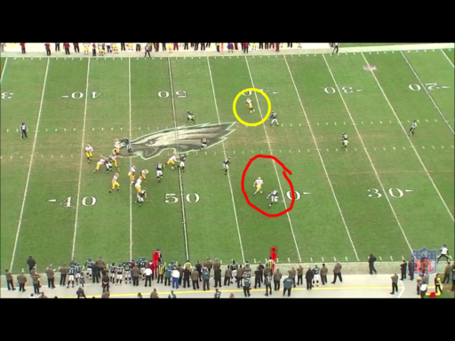 Instead, Robinson stops. RG3 looks to Williams who is covered which leads to a scramble and a throw away. 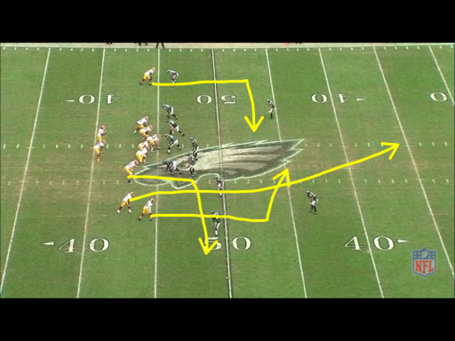 It's 3rd and 12 here. RG3 wants the post by Santana Moss (outside WR at bottom of the screen). 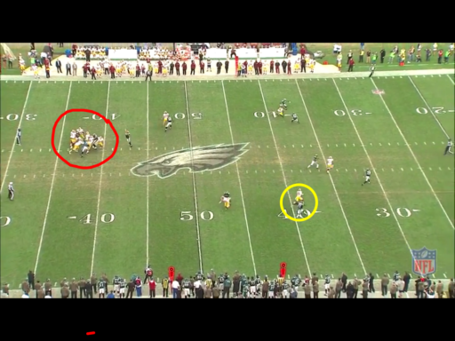 The pocket closes on RG3 quick. Somewhere in there, Griffin gets the ball off and Moss has separation. 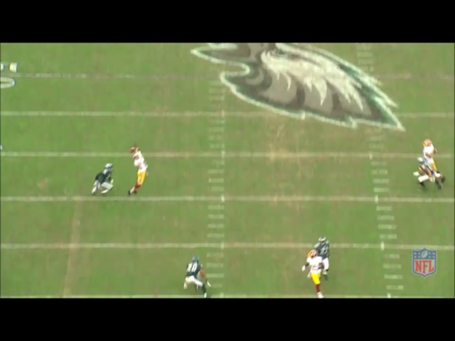 RG3 not being able to step into throw causes the ball to sail over Santana's head. Incomplete pass. 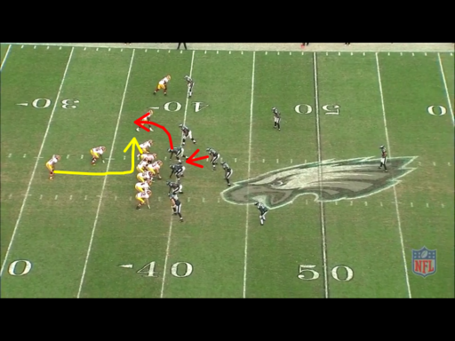 Here's the screen pass to Roy Helu Jr. Off the snap, Fletcher Cox goes RIGHT to the spot of where this play is headed. It looks like his responsibility was the flat while PHI brought a 4-man rush with the MLB. Does that mean they knew what the play was before we ran it? Unlikely, we haven't run many pure RB screens. 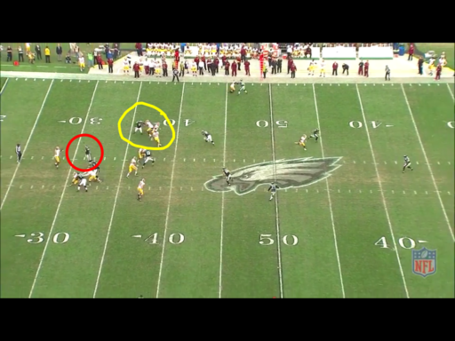 Ball gets tipped and nearly picked off by Cox. Even if it wasn't tipped, it doesn't look like this would have resulted in a very successful play. 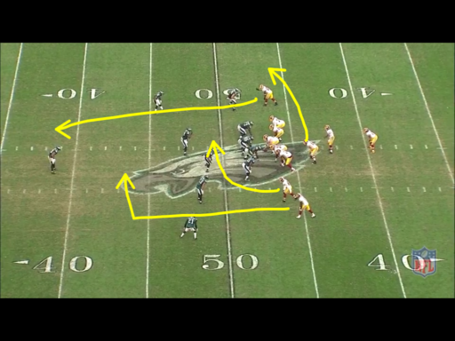 Here's a CRUCIAL 4th and 1 play. It's a read-option play-action pass. 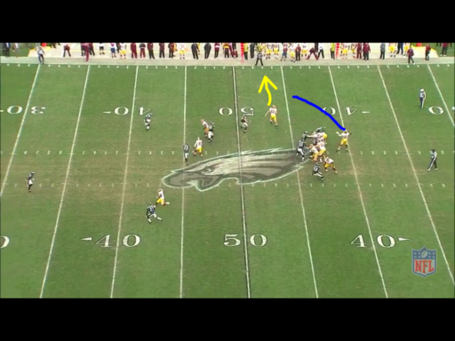 Logan Paulsen heads to the flat area with plenty of room. RG3 sees him and throws the ball. 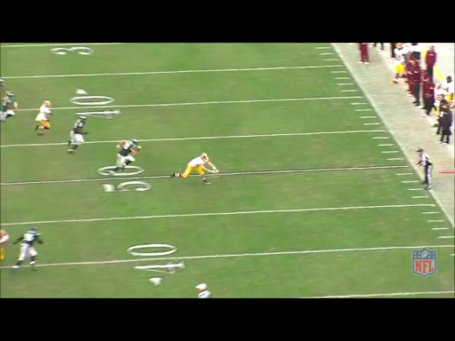 The ball is under-thrown and Paulsen can't pull it in. Yeah, there was a guy in Griffin's face but on a 4th and 1 in a game with little life, you NEED to get enough on this ball. You NEED this play. Incomplete pass. 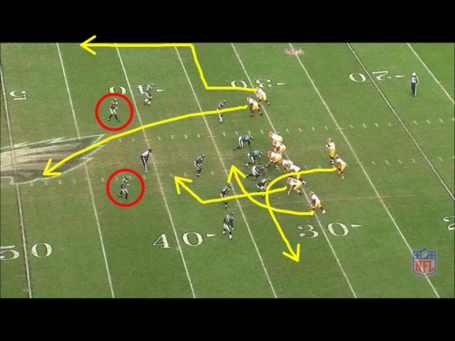 Here's a double move by Moss at the top of the screen late in the game against PHI Cover 2 man. 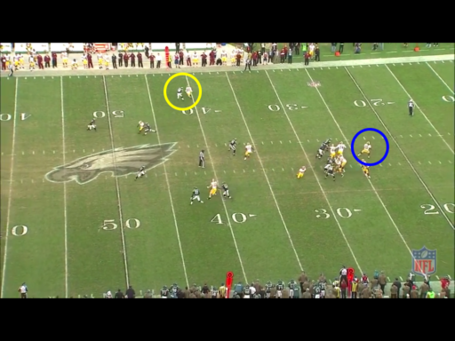 WSH gets the look they want when the CB crashes on Santana's out route. Moss then turns upfield. Note how far back RG3 is leaning. 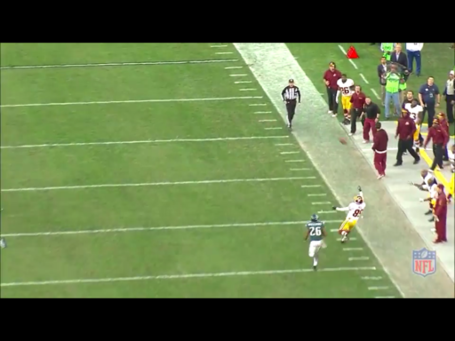 Griffin doesn't transfer weight and the ball sails out of bounds. The worst thing you can do is throw this ball out of bounds. You HAVE to keep that ball in the field of play and let your guy at least have a chance. 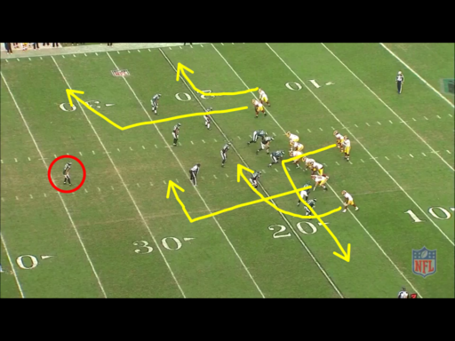 This is a 2nd and 25. PHI is running a Cover 1 man. RG3 is looking to the top of the screen where Pierre Garcon and Santana Moss are lined up. 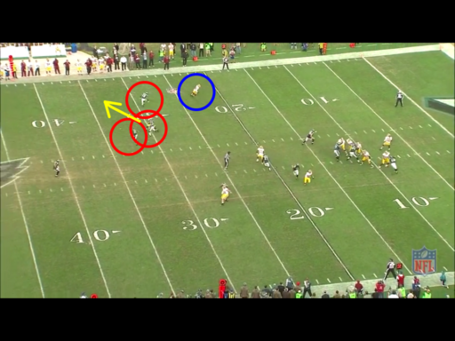 Garcon has a man covering him, draws the safety over, and the CB covering Moss also drops underneath Garcon (Whether the CB on Moss drops to undercut Garcon on purpose or if he is playing far off to protect being beat again by a double move is irrelevant). Situational football says hit the wide open Moss. It's 2nd and 25, you don't need to get all the yardage in one play. Like Andrew Luck once said, "You can't go broke making a profit." 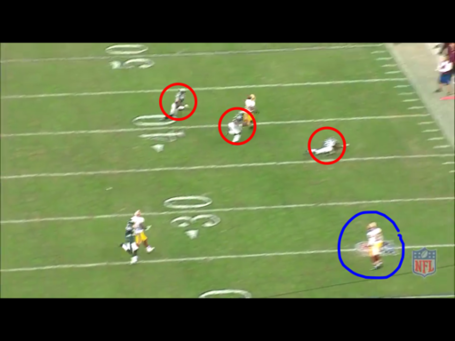 RG3 throws to Garcon and it falls incomplete. A better ball might have actually been completed here but three defenders around the ball. 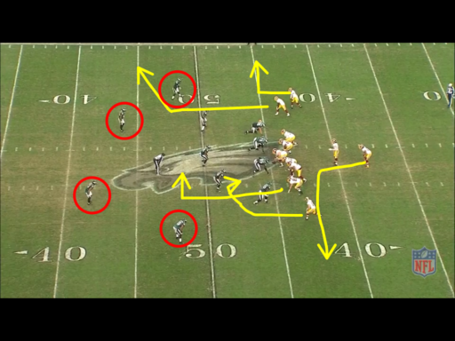 Later in the drive, nearly the same play call. RG3 is looking at the corner route and out route at the top of the screen. PHI is in Cover 4 (quarters coverage). 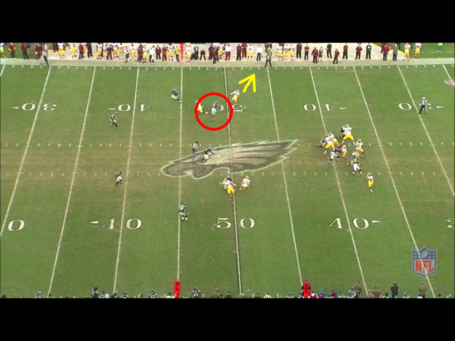 Moss makes his break and has separation from the defender responsible for the flat. RG3 comes off reading the corner route late and gets no leg into his throw. 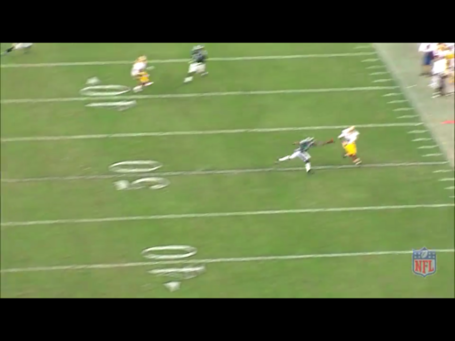 Brandon Boykin is able to recover and undercut the route, knocking it away. Incomplete pass. 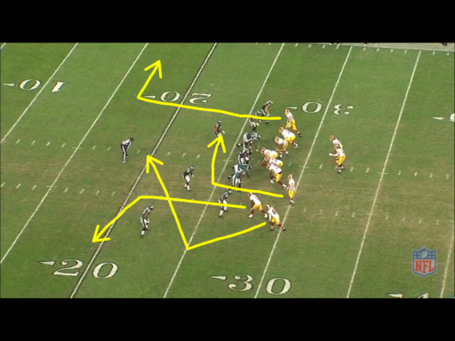 Last play I'll review. There was a lot of confusion pre-snap here. Nick Williams started on the right of this formation and motioned across to the left. RG3 yells to Williams to go BACK to the right side of the formation. Griffin looks up at the play clock and sees there is little time so he tells Nick to stay to the left. Frustrated, Griffin looks to sideline and nearly motions for timeout but realizes he can't burn his last timeout here. Pretty much hikes the ball here and "whatever happens, happens." One other note, I think it's ballsy for PHI to run a Cover 0 here. 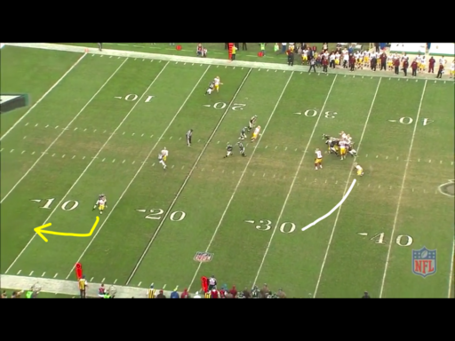 RG3 wanted Aldrick Robinson on the corner route but he is covered pretty well. When Robinson looks back for the ball and sees that Griffin has broken contain, he heads up field. 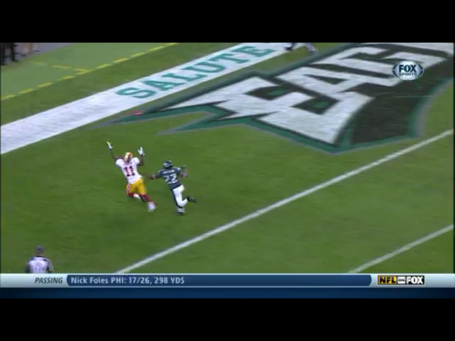 With a little more touch on this pass, it would've been a touchdown and possibly saved us from a week of:

That's all for this game. You may be wondering why I didn't break down the INT that sealed the game. Two reasons: 1. RG3 was just trying to throw the ball away and didn't get enough on it and 2. If I were to break it down, I'd want to come from a bunch of different angles that could probably be its own article. I'll let you guys decide if I do that in the comments section.