As a fan of the Washington Redskins, last week's loss against the Philadelphia Eagles served as the final nail in the proverbial coffin that has been this horrendous season.  The only thing going for me following the disaster earlier in the day was the hope that I might finally turn the corner on the Hump Day Pick'em.  While I mourned the loss of the Burgundy and Gold, I gleefully watched as my pick'em results turned in a 7-5-3 record.  This gave me a better than usual 7 points for the week.  Would it be enough to hold off the rapacious contestants?  Here were the Week 11 results: 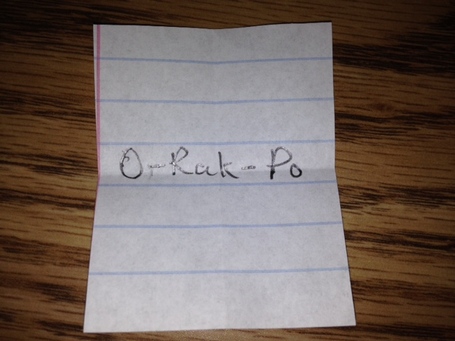 Congrats to O-Rak-Po!!!!!  Please email me your address and I will get your prize right out to you.

With last week's improving record, I have increased my season totals to 68-88-7, with nothing but blue skies ahead.  There is also a house cleaning item I would like to address.  A few of you have reached out to me and asked if we could start using the Monday Night scores as a tie breaker.  The staff and I feel that this is not a bad idea, but since we have been breaking ties all season using our lovely assistant to draw a name, we will continue this practice the rest of the season and explore changing it next year.  The staff also asked me to take this time to remind our contestants that the Hump Day Pick'em is not a democracy, so contestant requests are usually beaten down, mocked and then disposed of quickly.  If we really like one of your ideas, we may implement it, but please note that we will not give you any credit and will trumpet the success as a product of our genius.

New Orleans Saints (-7.5) at Atlanta Falcons: Falcons tight end Tony Gonzalez has alienated some of his teammates by walking around the practice facility wearing a t-shirt that reads "I came back for my 17th season and all I got was this lousy T-shirt. (And $7 Million)."  Pick:  Saints (-7.5)

Tampa Bay Buccaneers (+9) at Detroit Lions: In light of their recent success and two-game winning streak, Greg Schiano's agent has reached out to Buc's management looking for an extension and requested they call the club level in the stadium the "Greg Schiano Level".  Pick:  Buccaneers (+9)

Jacksonville Jaguars (+10) at Houston Texans: After winning their first two games, the Texans have now lost their last eight.  That was until the scheduling gods smiled upon them and put the Jaguars on their schedule in two of the next three games.  Pick:  Jaguars (+10)

Minnesota Vikings (+3.5) at Green Bay Packers: There hasn't been a quarterback matchup of this quality since the 4th quarter of the Jags-Falcons preseason game back in late August.  Pick:  Packers (-3.5)

San Diego Chargers (+5) at Kansas City Chiefs: Chiefs coach Andy Reid caught some criticism last week for starting wide receiver Dwayne Bowe a few days after he was arrested for speeding and marijuana possession.  Reid said he was unaware that Bowe had been using the drug, but that it did make sense considering how often he ran into him at Taco Bell at 2am.  Pick:  Chiefs (-5)

Carolina Panthers (-3.5) at Miami Dolphins: The Dolphins are 1-0 since being replaced by the Cowboys as my Team of Destiny.  The Panthers will need more than a botched non-penalty to get past this squad.  Pick:  Dolphins (+3.5)

Pittsburgh Steelers (+2) at Cleveland Browns: Both teams need a win this Sunday to keep their hopes alive in a tough division, but only one team has Jason Campbell.  Pick:  Steelers (+2)

New York Jets (+4) at Baltimore Ravens: Former Ravens defensive coordinator and current head coach of the Jets Rex Ryan has never defeated his old team.  When Ryan was reminded of that fact, he confused the media when he stated that no one thought the Washington Generals could ever beat the Harlem Globetrotters either.  Pick:  Ravens (-4)

Tennessee Titans (+1.5) at Oakland Raiders: The Raiders have not announced which quarterback they will go with between Terrelle Pryor, who is nursing a strained MCL, or undrafted rookie Matt McGloin.  McGloin was ecstatic when he learned that his three touchdowns and no interception performance last week was tied for the best performance by a Raiders' rookie since the merger in 1970.  Then he was sad when he learned the other quarterback to do so was Todd Marinovich.  Pick:  Raiders (-1.5)

Indianapolis Colts (+2.5) at Arizona Cardinals: It's not the holidays without the Colts and Cardinals playing a meaningful game with playoff implications late in November.  Pick:  Colts (+2.5)

Dallas Cowboys (+2.5) at New York Giants: In their first game since being pegged as the new Team of Destiny, the destruction of the Cowboys' season begins in the Meadowlands..  Pick:  Giants (-2.5)

Denver Broncos (-2.5) at New England Patriots: The Patriots haven't been underdogs at home since a 2005 matchup against Peyton Manning and the Colts.  New England lost that game, and Tom Brady stated on Monday he remembered it because afterwards he was so depressed that he listened to the Kelly Clarkson hit single "Since U Been Gone" in a loop the rest of the day.  Pick: Broncos (-2.5)

San Francisco 49ers (-5) at Washington Redskins: In a rare moment of concurrence, both President Barack Obama and House Speaker John Boehner agreed the Redskins franchise is a mess.  Pick:  49ers (-5)

So there are my Week 12 picks.  The winner this week will have this fabulous prize to look forward to: 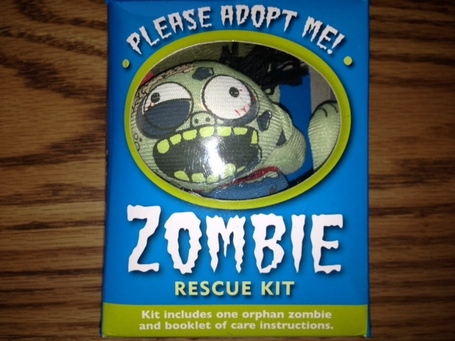 That's right - the Zombie Rescue Kit that is perfect for the special lady in your life who happens to be a big fan of the "The Walking Dead" or a child who watches the show at an inappropriately young age.  Or keep it for yourself and don't tell your friends.

(Picture of Zombie Rescue Kit is enlarged to show texture.)