An All-22 film breakdown of Redskins passing game woes against the Eagles (1st Half). 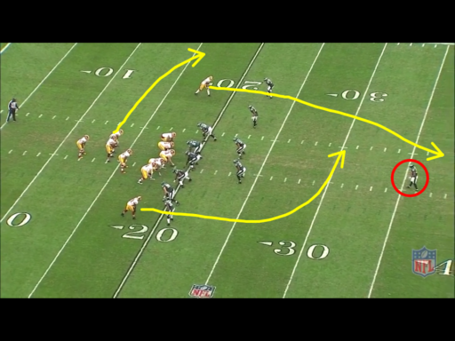 The first play is the all familiar Read-Option play-action 2 man route (Deep post and crosser route). 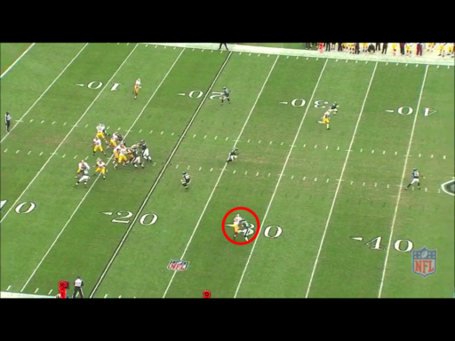 Robert Griffin III hits the top of his route and Pierre Garcon is his first read. As you can see, he is not open. 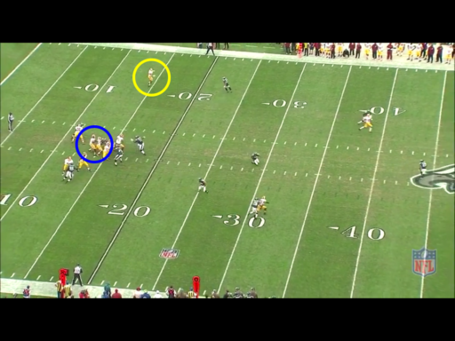 RG3 looks to check it down in the flat but Alfred Morris is getting pushed into his face forcing him to scramble out of the pocket and throw it away. 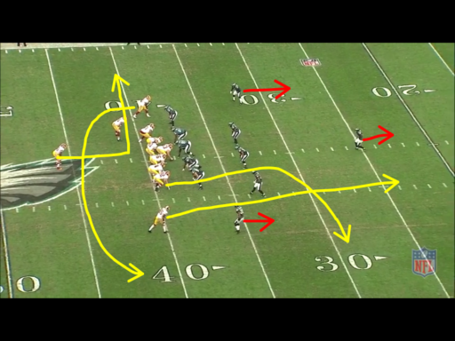 Here's another play-action pass, but this time with a reverse look as well. Eagles are in a Cover 3. The coverage is going to let Logan Paulsen loose on the corner route. 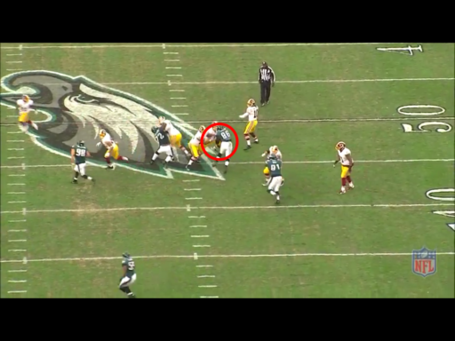 RG3 sees Paulsen come open and starts to throw the ball but doesn't step fully into the pass. There's a defender close but he has room to work especially with his quick release. 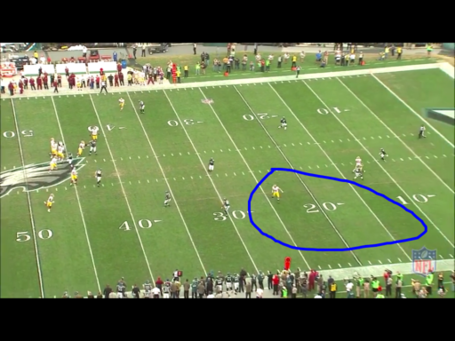 Paulsen is so wide open that nearly the only way this pass could be incomplete is if it's thrown out of bounds. Which, it was. There's some funky things going on with RG3's mechanics. There seems to be some disconnect between his upper body and lower body right now. Obviously, need a more accurate throw here. 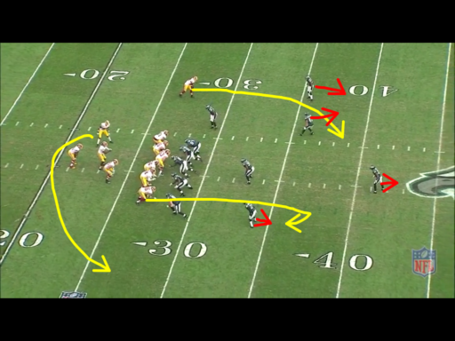 This play is also a play-action pass out of the Pistol. We have a deep post and a hitch route, with Leonard Hankerson coming around to the flat. Eagles running a Cover 4 (quarters coverage). 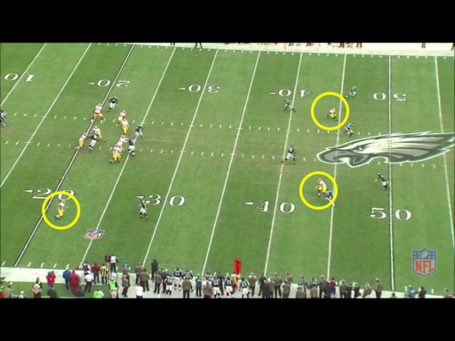 RG3 is able to slide away from pressure given up by Chris Chester twice but where could he throw it? No one is open. 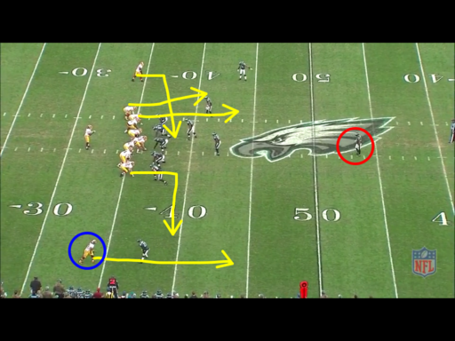 Here's a straight, drop-back pass. Helu motioned out of backfield to bottom of the screen so empty backfield and Eagles bring 6 rushers. With an empty set, you obviously only have 5 to block 6 so ball has to come out quick. Have two clear out routes up top with Garcon running a slant. CB over Garcon is also 10 yards off. 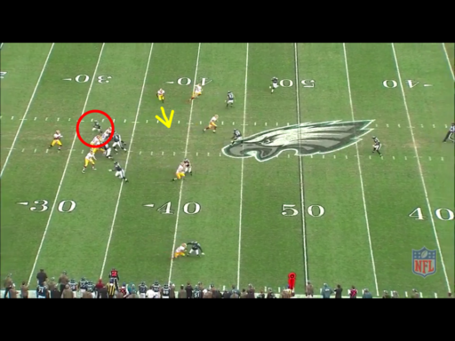 RG3 sees pass rusher here instead of Garcon. He should have thrown the ball. Instead, he takes a sack here. RG3 might not have gotten his eyes over to Garcon but pre-snap, he didn't identify 6 rushers vs 5 blockers or the CB cushion on short slant route. 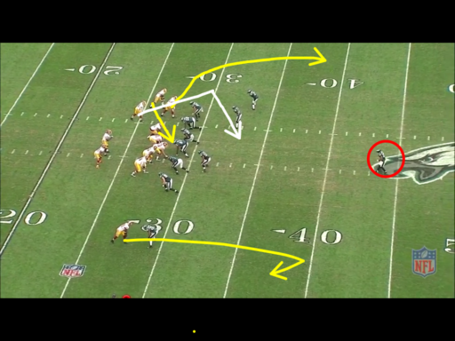 Here's a 3rd down play. Bunch formation at the top and Moss is the intended WR (white). 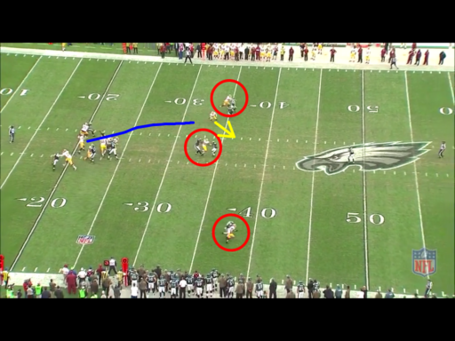 RG3 hits the top of his drop and all his WRs are covered except Moss who gained separation. RG3 delivers the ball. 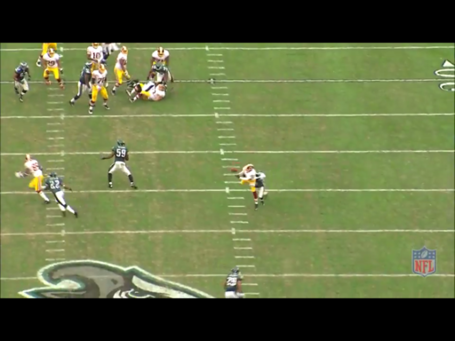 Moss just flat-out drops it. This was a good, accurate and on-time pass. Moss has done this a few times this year. 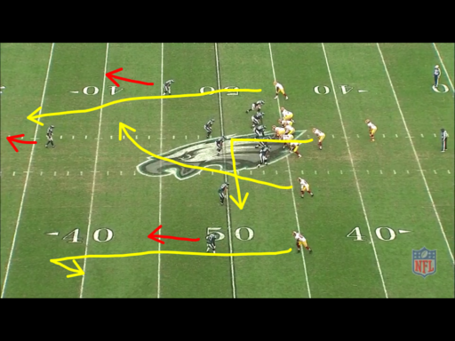 Here is a play action pass. The Eagles are running a Cover 3. 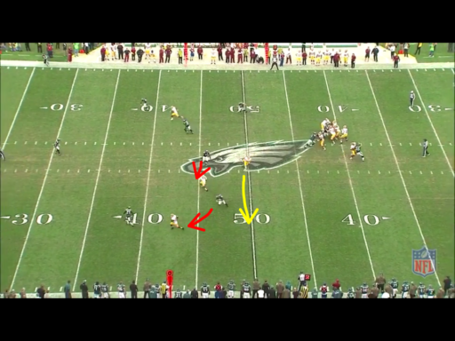 The MLB picks up Moss who is running the seam route and the Eagles defender that is responsible for the flat drops deep and undercuts Garcon's comeback route leaving Jordan Reed running free on his out route. 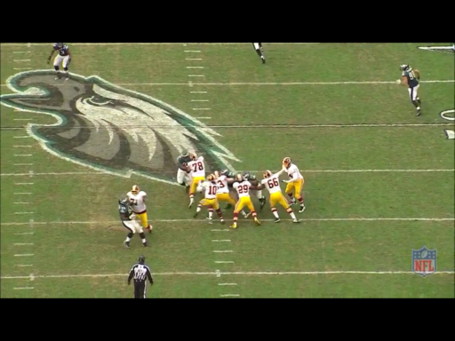 Unfortunately, O-line doesn't give him time to find Reed. He does end up scrambling for 10 yards though. 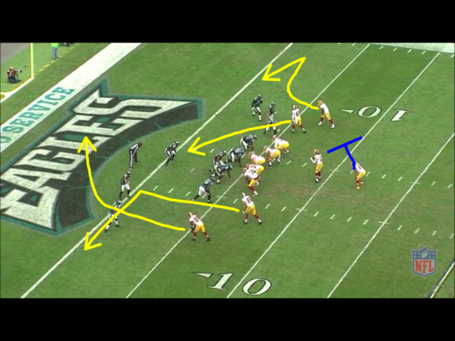 Here's the redzone play where Roy Helu Jr needed to make a better block. To be fair, it was suppose to be a three step drop and release. 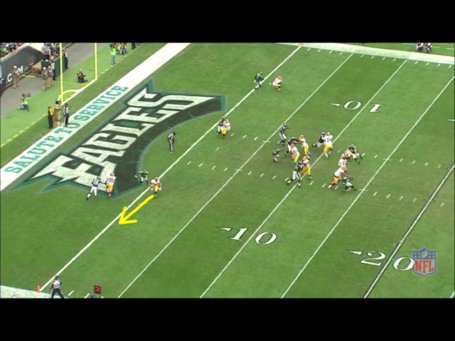 RG3 is looking to Reed who has a little separation. It's a matter of opinion if you think he should have thrown the ball or not. Is this an anticipation issue or would the defender have undercut the throw? Unrelated, but I also wonder why Garcon and Reed weren't lined up a little closer together to create a more natural "rub" route? 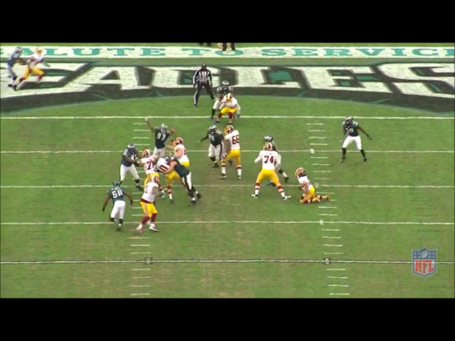 Instead, the play ends in a BRUTAL shot to RG3. 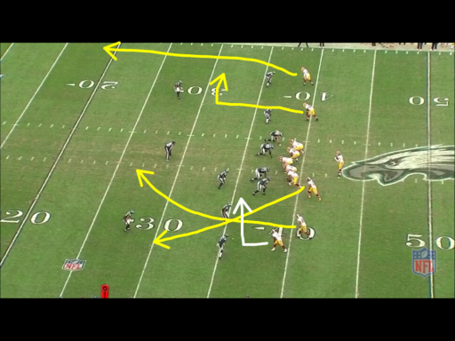 Here's a play with two clear out routes again at the bottom of the screen. Aldrick Robinson running the slant underneath it. Eagles are in a Cover 2 man coverage. 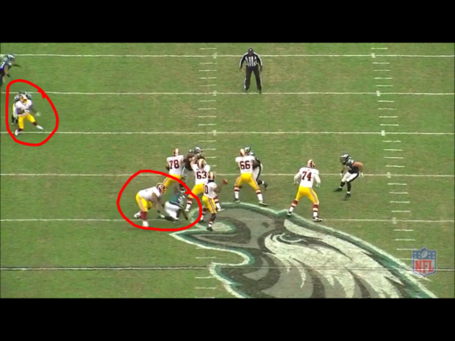 Eagles deal with the bunched WRs well and pass off each others WRs so a LB bumps Robinson off his route. That, combined with Trent Williams getting beat off the line of scrimmage gives RG3 nothing to do here but take the sack.

That concludes the review of the first half issues. Check back tomorrow for my review on the second half.