An All-22 film breakdown of issues that arose from our 3rd down defense.

Share All sharing options for: Hazard's Huddle: Third Down Defensive Woes vs. Vikings

Someone asked me about breaking down some of the issues we had on 3rd down. So, here it is. 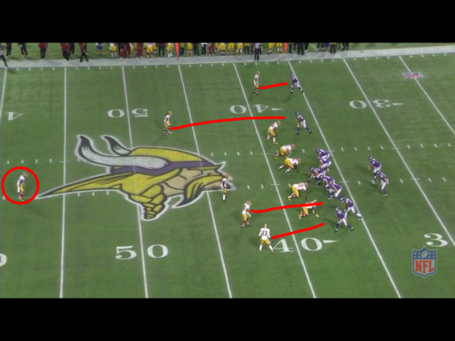 Here's a 3rd and 7 from the first half. The Redskins are playing a Cover 1 man. It looks like DeAngelo Hall and Josh Wilson have an understanding that they'll switch WRs if they cross each other to prevent a pick play. 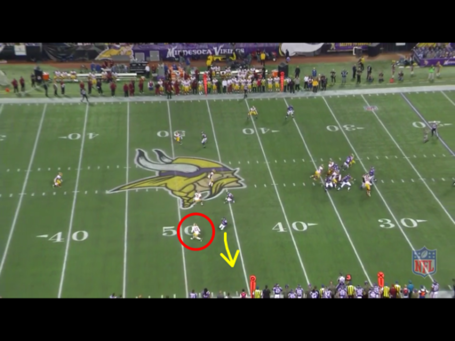 That causes Hall to play a little bit deeper. The WRs don't cross and D-Hall opens his hips inside. As he does that, Jerome Simpson breaks on his out route. 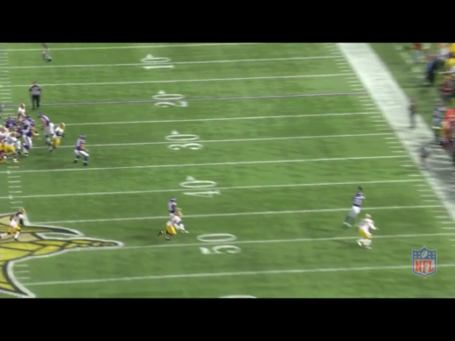 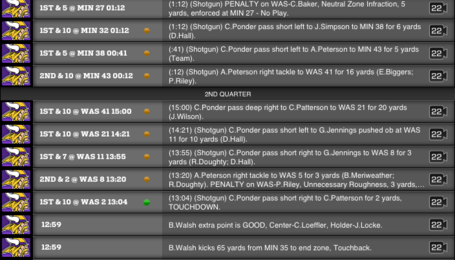 THIS CAN'T HAPPEN! This was a long drive that didn't even see a 3rd down. 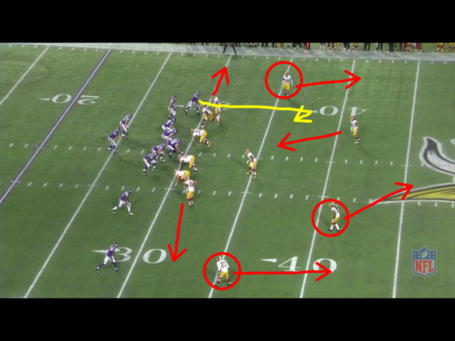 In the 2nd half, 3rd down was a little more problematic. On this play, Redskins show a Cover 2 but shift to a Cover 3. The intended WR is running a hitch route (which is a good route to run against a Cover 3). 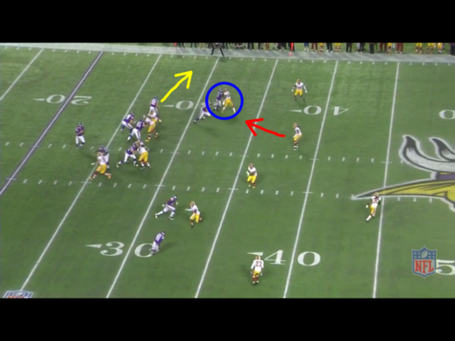 Perry Riley presses the WR (blue circle) and heads to the flat (his responsibility) where the RB is headed. Meriweather should be coming up but hesitates a moment. 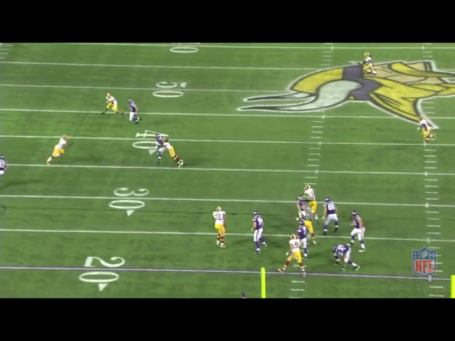 Meriweather makes the tackle but it's too late. 3rd and 6 = Gain of 6 yards. 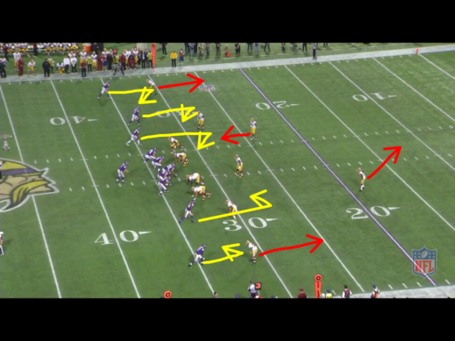 Here's a 3rd and 3. Vikings come out in an empty set. Remember how I said a hitch route is a good route to run against a Cover 3? Well, Redskins are running it again and the Vikings run all hitches across the board. 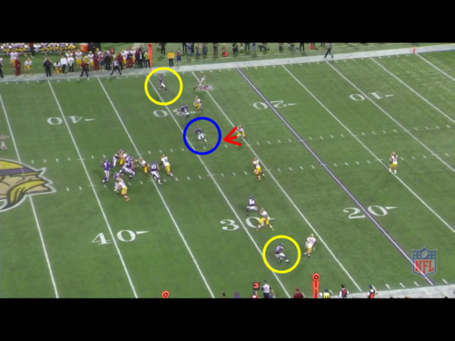 As you can see, 3 hitch routes are open as Ponder is about to deliver the ball. Ponder chooses Greg Jennings (blue circle) in the middle of the field. Meriweather comes up. 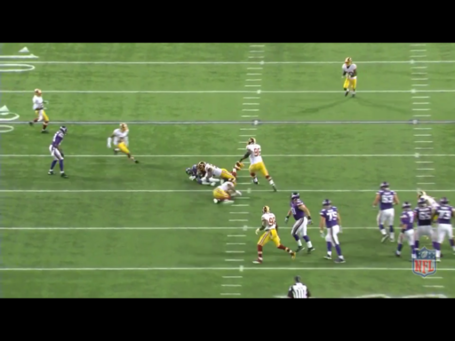 Brandon Meriweather and London Fletcher combine for the tackle but it's too late. 3rd and 3 = Gain of 5 yards. 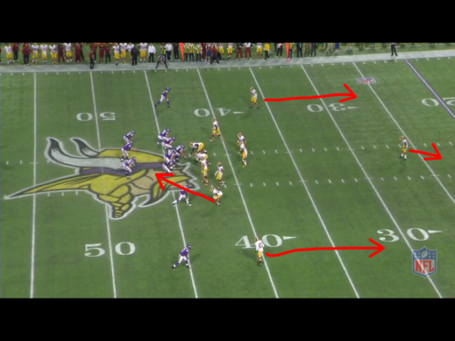 Here is a 3rd and 12. Redskins are running a Cover 3 with a blitz off the edge from Meriweather and from WIlson off the slot WR. 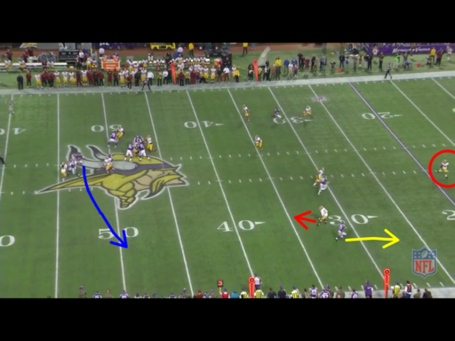 DHall leaves his zone because it looks like he's expecting to jump an out route from the slot WR. Slot WR actually runs a seam route instead. Ponder begins to break contain so DHall is stuck between coming up to attack Ponder or finding his WR. 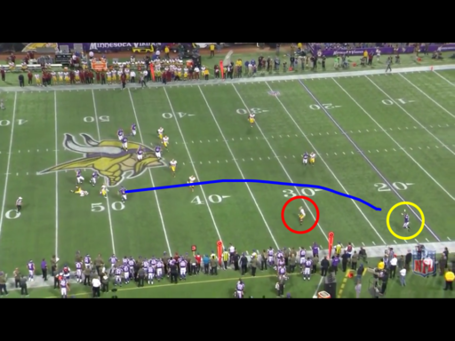 DHall begins stepping forward and Ponder throws the ball over his head to the WR frantically screaming for the ball. 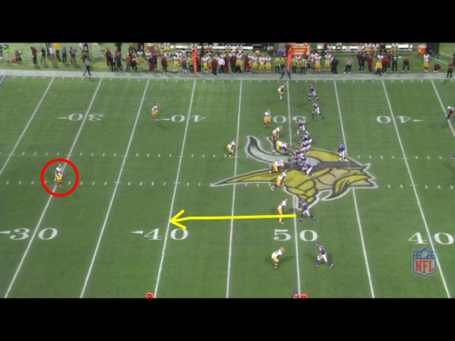 This last play is the infamous "wrong personnel" play. It's 3rd and 10. WSH is playing Cover 1 man. Perry Riley is on the slot WR at the bottom with a press coverage look. That WR is running a fly route. 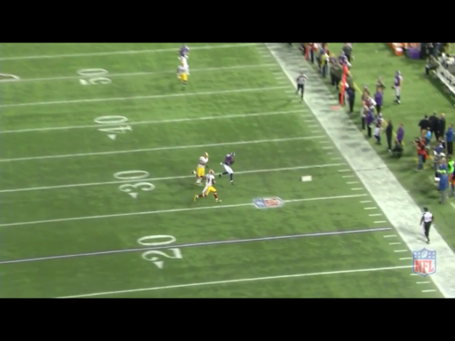 WR is too quick and Riley can't even get his hands on him. Matt Cassel just drops the ball over Riley and in front of Bacarri Rambo. 3rd and 10 = Gain of 25 yards.