Mike Harar talked with Alfred Morris on Friday to discuss the NFL's Play 60 program, pre-game rituals, his favorite NFL player of all-time, and what the Redskins need to do to turn the season around.

Share All sharing options for: One-On-One With Alfred Morris

In only his second season in the NFL, Redskins star running back Alfred Morris has already made a huge impact on and off the field.  The NFL has launched a new program designed to help get kids active and healthy, and Morris has partnered with them to help spread the word.  Late on Friday afternoon, less than 24 hours after a heart-breaking loss to the Minnesota Vikings that dropped his team to 3-6, I was given the opportunity to talk with Morris for a while to discuss the Play 60 program and all things Redskins.

I knew he had a reputation for being extremely approachable and easy to talk to.  He did not disappoint.

Here are the highlights:

Alfred, thank you so much for doing this interview after what I'm sure was a long night for you.  I have a lot to ask you about in regards to the season thus far, but wanted to start with something that you're doing off the field.  The NFL and the Redskins are very active in the DC area community with several different programs.  Tell me about the NFL's Fuel Up to Play 60 "Make Your Move" Campaign and how you're involved.

Fuel Up to Play 60 is a program that was started by the National Dairy Council, who partnered with the NFL, to get kids empowered to make healthy choices when it comes to eating, and to get active. Not only them, but parents and teachers as well.   So, Fuel Up to Play 60 partnered with us to help inspire kids to be active.  You watch a video called Make Your Move.  It's me and a couple other NFL buddies asking you to get out and move and do a dance-off to challenge kids and adults and teachers to make their move, and to post it onto the Fuel Up to Play 60.com website. 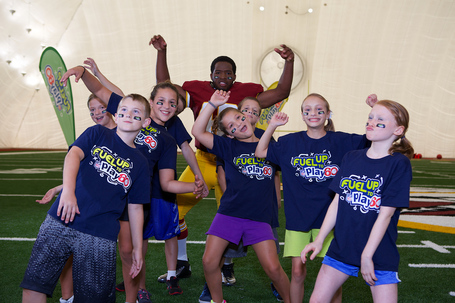 We want to encourage them to get up and get active and make healthier choices, and it's a good deal, because of the gifts and prize giveaways that they have right now for posting the videos.   I thought it was a great cause to get involved in, because I feel a lot of people don't know the importance of good nutrition.

Now, I know you grew up in Florida and played football and basketball in high school.  Is that correct?

Yes, football.  I played basketball for a little bit.  But I mainly did track, weight-lifting and the wrestling team.

When you were young, were you a big NFL fan?

I was.  When I first started playing, I didn't know who the NFL was.  I watched these games, but I didn't know how big or how important these games were.  I mean the NFL, that's like the elite level of football, so the older I got the more I was like, "Hey, I want to play in the NFL."

On the Thursday night broadcast, Alex Flanagan of the NFL Network mentioned that you idolized Adrian Peterson.  When you were growing up and you were playing, was there anyone else you really looked up to or patterned your game after?

(Laughs) Well first of all, I don't idolize him.  I just think he's a great running back.  I tried to tell her, I'm not a fan of his, but I definitely have mad respect for him and the way he runs and the way he carries himself, not only on the field, but off the field as well.

I grew up watching the Broncos on TV and Green Bay with Dorsey Levens and Ahman Green.  But if I patterned my game after anybody, it was those old school backs.

My favorite player and running back of all time was Walter Payton.  I think he was the greatest ever. Sweetness - you can't get better than that.  He refused to be tackled by only one person. He didn't shy away from contact.  He could outrun.  He could make you miss.  He was just the total package.  I thought, "I want to be like this guy.  I want to be a runner like him.  I want to have that sheer will and determination and to refuse to let you tackle me by yourself."  I mean, you're gonna need help to come tackle me.

They talked about you quite a bit in the first half of the (Thursday Night Football) broadcast last night.  They mentioned you like to come on the field really early before the game and often are spotted talking to the security guards and others that work at the stadium.  What is your pregame ritual or do you have one?

I always go out into the stadium early because I don't like sitting around the locker room all the time.  So, I go out and just kind of mill around in the stadium and get a feel for the field.  The security. . . some of the guest services, people in the stadium, they speak to me.  I start a conversation with them.   You know, I enjoy talking.   I'm sure you're needing me to shut up, but I don't have a ritual at all.

(Laughs) Now, obviously, the season has not gone as anyone had anticipated after the success of last year.  In regards to the game last night against the Vikings, you had a season high 139 rushing yards and the offense as a whole put up good numbers, especially in the first half.  What adjustments do you think the Vikings made in the second half that changed the tide, and if it wasn't changes they made, what went wrong from your perspective?

When we came out (from halftime), we were excited and had the ball back after putting a drive down the field.   I don't think we punted one time in the first half if I'm not mistaken.  We played hard and were confident, (but) we kind of came out flat.   I think I probably ran on a third down and couldn't convert and that gave the Minnesota Vikings momentum.  They were able to get the ball back.  Their offense got a score.

Then our lack of plays and our lack of execution gave them momentum and at that point they thought they could do anything they wanted.  They pressured us a lot more, were able to get home, sacking the quarterback more, and I think they dialed up more pressure.   I mean it wasn't nothing too fancy they threw at us; I feel it was our lack of execution that gave them momentum.  Then they was pumped.  They kind of just pinned their ears back and came after us, and that came back to bite us.  We ended up losing the game, unfortunately.

Last year, you defied the odds as a sixth round pick out of Florida Atlantic, made the team, became the starter, and had an amazing season breaking the Redskins Single season rushing record as a rookie.  This season, as of today, you have five touchdowns and are the NFL's rushing leader with 825 yards.  What drives you as a player to succeed in this league?

My whole desire to play on the field is not for the money or the fame.  I wanted to be able to play against the best of the best and be successful at doing that.  And that's why I play every play like it's my last play.  It's the mantra I have, and that's what I do.

It's an experience, it's not a career. And I just enjoy it and I have fun each and every day.  Not just on game days, but on practices as well. I just have fun and it's translated to me being successful.

What has been the biggest difference for you going from year 1 to year 2, and what parts of your game would you still like to improve on?

I would still like to improve on the receiving. It's not that I can't do it; I find myself in a situation that we kind of have a dual back system.  I step to that, but I want to get into the passing a little more and it's just something that I continue to work at.

In practice and in the offseason and during camp, I want to make sure I catch the ball.  I'm not that great a route runner. I can run a route to win a little bit.  But to really get that separation, that is key for you to becoming a prime target.   I have to work on it even more and I want to get better.   Not only just in the receiving area, but also running.  There is always room for improvement.  I always try to find better ways.

Not even just running, but blocking, you know.  Picking up blitzes.  I think that's one of the toughest things coming from college to pros as a running back, is picking up blitzes.  I don't care how good you are, you're not gonna be on that field if you can't protect your quarterback, who's the face of the franchise.

As it stands right now*, the Redskins are two games back in the NFC East and are still alive from a division standpoint.   What is your approach going forward and what adjustments do you feel the team needs to make to try to turn this season around.

First of all, we just need to finish games. We came out of the first round hot (against the Vikings) and then we got flat.  It's not how you start, it's how you finish. And we started strong but we didn't finish strong.  Actually, this whole season (we have) not played a whole sixty minutes and that's something we just have to do going into the next part of the season.

But, we've been here before.  Last year, coming out of the bye week, we were 3-6.  Right now we're on a break with 3-6.  We come back and we start this year with the Eagles.  Last year it was Thanksgiving with Dallas.  So just to make that run, it's not hard.  I mean it's not easy at all to make a seven-game run, but we was able to do it.

*With the Cowboys' loss to the Saints on Sunday, the Redskins are now 1.5 games back in the NFC East.

To watch the video that Morris refers to and to find out more about the Make Your Move - Fuel Up to Play 60 program, check out www.FuelUpToPlay60.com.