During a boring Redskins bye week, the only thing keeping me interested in watching The RedZone Channel, sitting on my La-Z-Boy recliner and drinking adult beverages for eleven hours were my fantasy football matchups and hopes of quashing the contestants in the Hump Day Pick'em.  While I did fairly well in fantasy, I did fairly crummy this week in the Pick'em.  I finished with a record of 6-8, giving me a paltry six points.  Would it be enough to hold off the feisty contestants?  Here were the Week 5 results:

Congrats to washingtonwin!!!  After tying last week and then losing the random drawing, he stormed back this week and took the victory.  Please email me your address and I will get your fabulous prize right out to you!!

My total record, after last week's losing effort, has tumbled to 33-42-3.  The Hump Day Pick'em staff has been placed on notice that if things don't turn around soon, there will be consequences and repercussions.  Now, on to Week 6.

New York Giants (+8) at Chicago Bears: The still winless Giants appealed to the NFL Network to flex this game out of Thursday Night Football but were unsuccessful due to scheduling conflicts.  Pick: Bears (-8)

Oakland Raiders (+9) at Kansas City Chiefs: With the success of the RG3 campaign with Adidas, Nike approached Terrelle Pryor about potentially doing a series of "What Can't TP Do?" ads, but in the end it was scrapped.  Pick: Raiders (+9)

Philadelphia Eagles (-1) at Tampa Bay Buccaneers: Bucs coach Greg Schiano is said to be on the hot seat after the team has opened the season 0-4 and released their starting quarterback.  When asked his thoughts, Schiano stated he does not believe that to be the case, has long term plans in Tampa, and thinks USC has a beautiful campus this time of year.  Pick: Eagles (-1)

Green Bay Packers (-3) at Baltimore Ravens: Packers linebacker Clay Matthews will miss the game with a broken thumb.  He stated he is traveling with the team anyway to lend moral support, but teammates have quietly wondered if he going just to binge on crab cakes and Natty Boh.  Pick: Packers (-3)

Detroit Lions (-2.5) at Cleveland Browns: Lions wide receiver Calvin Johnson is questionable heading into this week.  When Browns quarterback Brandon Weeden was asked how that helped their chances, he shook his head and stated "Well, we're without Brian Hoyer, so I guess that makes things even."  Pick: Browns (+2.5)

Carolina Panthers (+2.5) at Minnesota Vikings: Vikings running back Adrian Peterson ruffled some feathers with his teammates on Tuesday when he stated he has shifted his team goal from making the playoffs to solidifying a good first round pick.  Pick: Vikings (-2.5)

St. Louis Rams (+7) at Houston Texans: The Texans are trying to halt a three game losing streak as they welcome the Rams to Houston.  Houston's quarterback Matt Schaub has spent the week letting the media know that he is not concerned that backup T.J. Yates could take his job, but he is curious as to why his locker has been moved into the storage closet.  Pick: Texans (-7)

Pittsburgh Steelers (+1) at New York Jets: When Jets coach Rex Ryan was asked if he felt his 3-2 team could get over confident after winning some big games recently, Ryan responded that they feel good about themselves but do not think they are King Kong.  He later stated he felt Mothra might be a better comparison.  Pick: Jets (-1)

Cincinnati Bengals (-7.5) at Buffalo Bills: Buffalo has promoted practice squad quarterback Thad Lewis to the active roster and will start him against the Bengals.  CBS has prepared a How I Met Your Mother marathon and will re-institute the "skunk rule" for this game.  Pick: Bengals (-7.5)

Tennessee Titans (+13.5) at Seattle Seahawks: NFL commission Roger Goodell was not pleased when Titans running back Chris Johnson said they realize they have a tough matchup in Week 6 and are going to just focus on covering the spread.  Pick: Seahawks (-13.5)

Jacksonville Jaguars (+26.5) at Denver Broncos: The Broncos are going to take a team trip on Sunday morning to Elitch Gardens amusement park and plan to show up at the stadium some time in the third quarter.  Pick: Broncos (-26.5)

Arizona Cardinals (+11) at San Francisco 49ers: This is an important in-division battle featuring two 3-2 teams.  When asked how his team was preparing for the game, San Francisco quarterback Colin Kaepernick stated he really liked the suit he was wearing.  Pick: Cardinals (+11)

New Orleans Saints (+2.5) at New England Patriots: There are rumors circulating that Patriots tight end Rob Gronkowski will finally be cleared to play against the Saints.  These rumors have been compounded by reports from local club patrons who stated Gronkowski has been out till 4am each night this week celebrating the good news.  Pick: Patriots (-2.5)

Indianapolis Colts (-1.5) at San Diego Chargers: After five games, Chargers quarterback Phillip Rivers is on pace to throw for 5,152 yards this year.  When Colts quarterback Andrew Luck was informed of this, Luck laughed and said he could do that too, if he wanted.  Pick: Colts (-1.5)

So there are my Week 6 picks.  The winner this week will have this fabulous prize to look forward to: 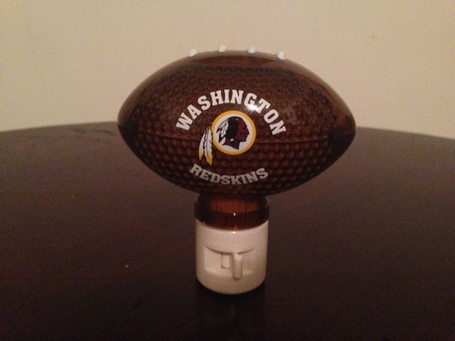 That's right - this warm Redskins nightlight that will appease your irrational nighttime fear of the dark.