Hogs Haven caught up with Redskins FS, Reed Doughty, at the Benetton in Georgetown D.C. to talk about a variety of issues....mostly Redskins, but some fashion.

For those that don't know the D.C. area well, the Georgetown area is well-known as the gauntlet of boutique fashion stores and over the top prices in shopping. On Redskins road games, you can often find Ken Meringolo here trying on every over-sized, collared sweaters ala Zoolander.

When I got the email from my friend at Mokia Media, aka Miss Fedex Field 2009,  that Benetton was having a party to introduce their Autumn-Winter 2013 collection showcase, I wasn't sure what to think. Then I read further and saw Reed Doughty would be attending. When I think of fashion and the Redskins, Clinton Portis, Devin Thomas, and Fred Davis come to mind. So, what is known Colorado fisherman, outdoorsman, and Swiss-Army knife SS, Reed Doughty, doing all the way downtown at a fashion gig?

I ask him that question along with: Why is Rambo not seeing the field and What to make of the Redskins slow start after last year? If you can deal with the back-noise of the super loud DJ, this is actually a solid interview with Doughty being straight forward. He wants to win and shows a veteran attitude.

So, after touring the three floors of the Benetton, I happened to come across the rack that held the same sweater Doughty was wearing. I threw it on and walked across the floor to re-introduce myself. 100% of women and men a the party agreed he wore it better. 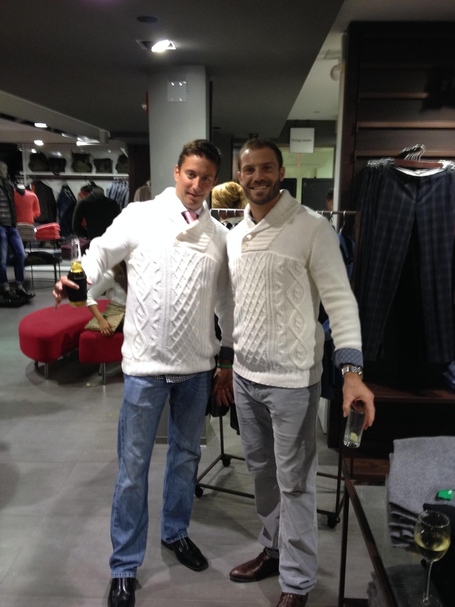