Yesterday, we took a look at the troubles the Washington Redskins had in the drop-back passing game vs. the Denver Broncos (If you missed it, you can find it HERE). Today, we'll be looking at the play-action passing game. Did Alfred Morris's success open things up for the offense? How did the offensive line look compared to straight drop-backs? Did it help the WRs get separation? Was it easier for Robert Griffin III to make reads? Let's take a look: 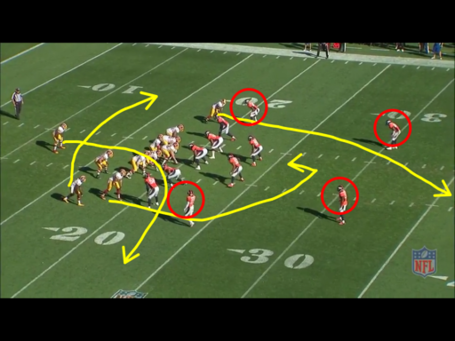 The first play of the game, Kyle Shanahan dials up a deep bomb off a PA (play-action) fake reverse. The Broncos are in a Cover 2 zone (CBs play the flat, two safeties stay over top and split the field in half). 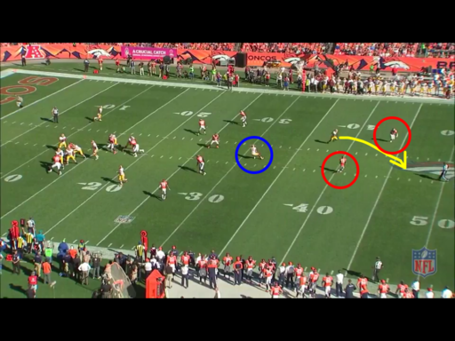 With no other deep route, both safeties are able to focus on Garcon. RG3 has Jordan Reed (blue circle) open in the middle of the field but stays looking at Garcon for too long. This ends in a Griffin scramble. 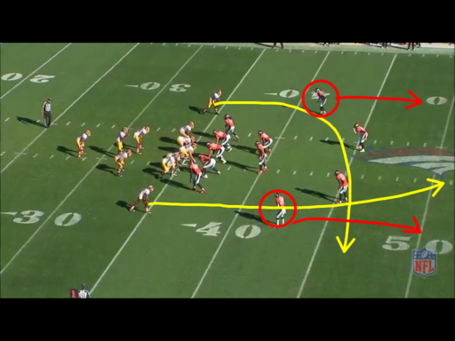 Here's the Redskins typical read-option play-action. It's a two man route. The Broncos are running what is called a Cover 2 switch. It's a Cover 2 zone, except the safeties and CBs exchange responsibilities. This means the safeties stay shallow and play the flats/sidelines while the two CBs bail deep and cut the field in half. 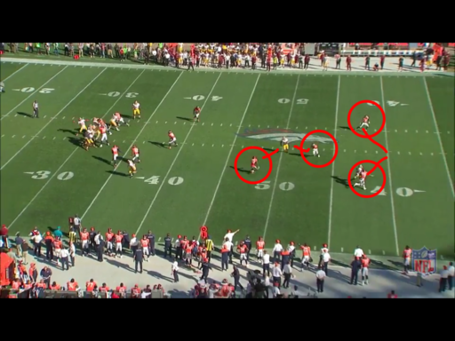 Will Montgomery is in RG3's lap when he lets go of this ball so he can't step into his throw. Doesn't matter anyway, both WRs get double covered. Logan Paulsen leaks out late at the bottom of the screen but he doesn't look like a read on this play. (Doesn't look like the old Packers/Chumura play where the TE cut blocks someone/falls down, then releases into route.) 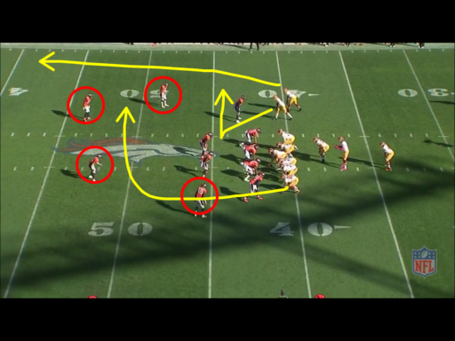 Here's another Read-Option play-action. The Broncos are showing a Cover 2 but shift to a Cover 1. 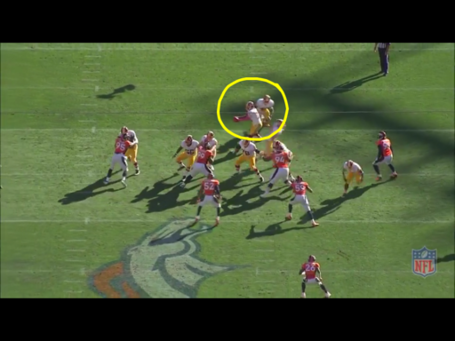 Can we take a second and talk about how annoying this is? Does it ruin the play? No, but you'd like to go through one game where this doesn't happen. You'd like to see your QB/RB on the same page in week 8. 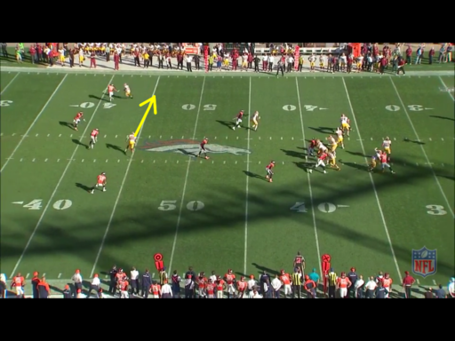 RG3 reaches the top of his drop and the ball should come out. J.Reed is running open across the middle of the field. 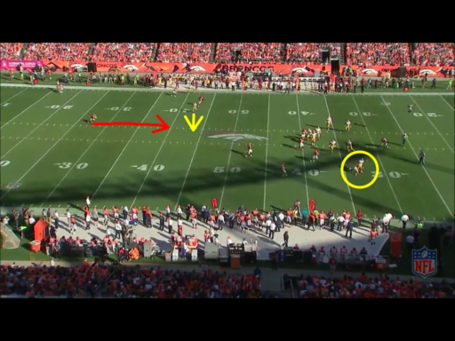 RG3 doesn't fire and holds the ball too long. He then scrambles, back pedals, and throws a lame duck off his back foot (yellow circle). It's late and across the middle; two things you are taught not to do on ANY level of football. Leonard Hankerson is coming into open area in the middle of the field but the ball floats so long the FS has time to run up. 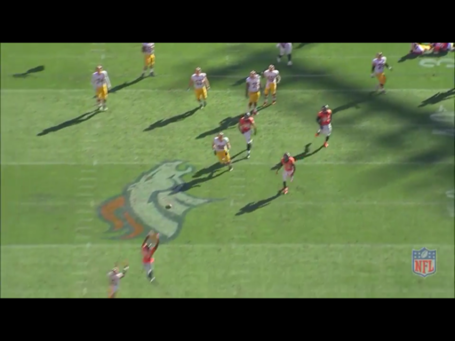 I STILL have no clue how this isn't an INT. Robert Griffin III, don't do this again. Thanks. 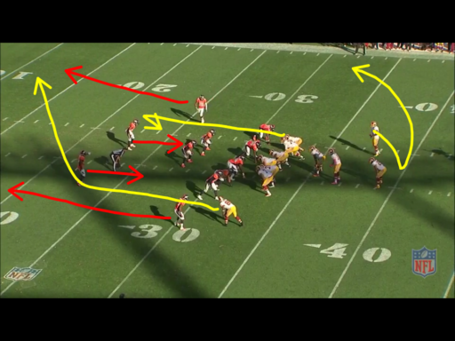 Here's another Read-Option play-action. Josh Morgan motions into backfield like he is about to be the "pitch" man on triple-option but flares back out into the flat. The Broncos run that Cover 2 switch again (safeties come up, CBs drop deep). 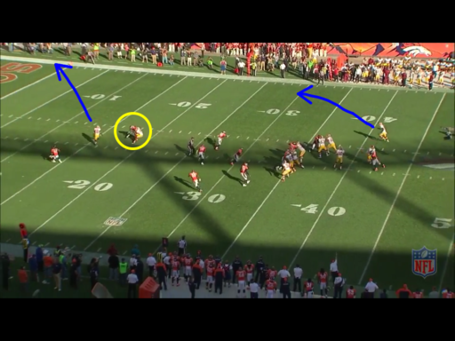 RG3 stares down J.Reed whose hitch route holds the backside CB (who is responsible for the deep top half of the field). That frees up Garcon to run to the end zone alone . The safety bit up on the PA so that left Morgan wide open in the flat also. RG3 doesn't read the deep guy biting up and throws it to Reed. The pass falls incomplete. 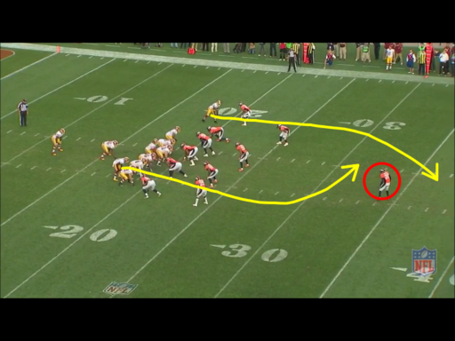 Here comes the unraveling. The "21-21 tie, 3-pass-and-out" series. The Redskins are in 21 personnel. Josh Morgan is lined up in the backfield between Logan Paulsen and Tyler Polumbus. Redskins had been using Morgan like this on run plays earlier in the game so this was a good set-up. Broncos are in a Cover 1 man. 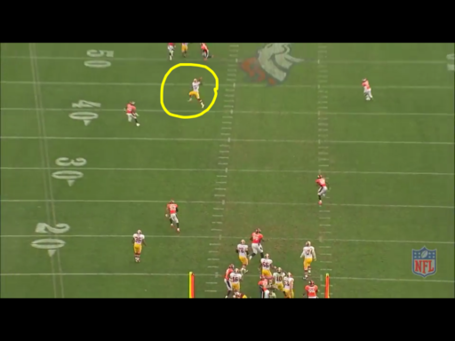 Because of Morgan's alignment, the CB looks a little confused about his responsibility. He keeps an eye on Paulsen to make sure he doesn't go out on a pattern and releases J.Morgan to the middle of the field. RG3's pass is a little behind but Morgan should catch this. He got his head around late, tried to catch it one-handed. Incomplete. 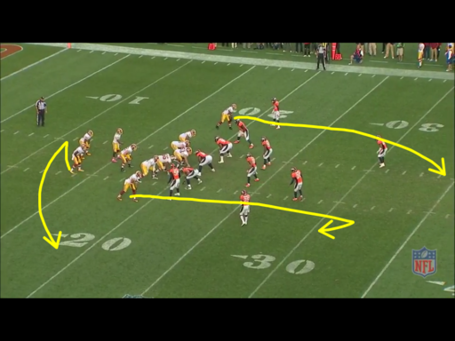 This is the very next play. I originally ROASTED Kyle Shanahan (I think nearly everyone did) for not running on 2nd down to try and make 3rd down more manageable. After reviewing the tape, while I still don't agree with it, I now understand why he called a pass play. Does the play look familiar? It's the same play call where RG3 missed seeing Garcon wide open in the end zone. Unfortunately, this time the Broncos run a Cover 1 man. 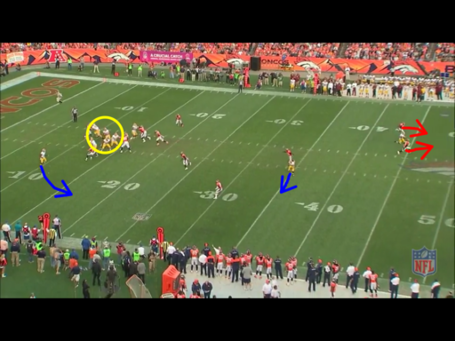 Cover 1 man leaves the safety over the top to help double team Garcon (red arrows). Reed and Morgan are both coming open. Paulsen and Morris give up pressure and RG3 steps up into pocket but stays on his first read the whole time. That means, on the first one, RG3 makes the wrong read and doesn't hit Garcon. On this second one, RG3 makes the wrong read and stays with Garcon. 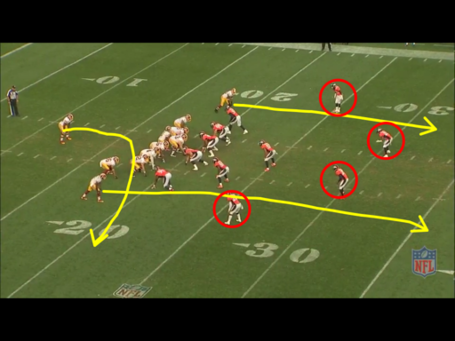 Jack Del Rio seemed to be one step ahead of Kyle in the 4th quarter. I can only imagine running this play expecting a Cover 1 man, but even then the tight WR splits would make it easy for the deep safety to stay with both fly routes. The Broncos run a Cover 2 man though. 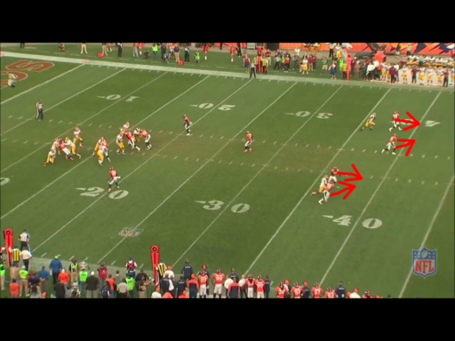 RG3 is sliding to his left but the Cover 2 man leaves both WRs double covered. Morris not out of the backfield. 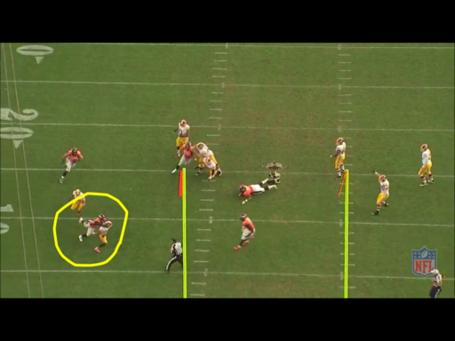 This play was just ugly. RG3 running around, back-pedaling, and throws off his back foot while taking a big hit. The ball bounces to Logan Paulsen who was blocking. You can add the offensive holding penalty to this play as well. 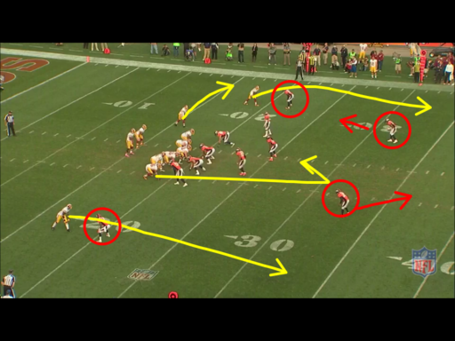 The last play is a Shotgun play-action. The Broncos show a cover 2 and shift to a Cover 1 man with a disguised blitz from OLB and slot CB. 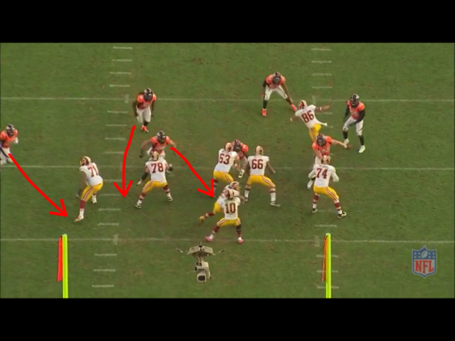 Will Montgomery takes the DT who crosses his face. Kory passes his DT off to Monty to block the blitzing LB which leaves a wide open gap. The play has no chance. 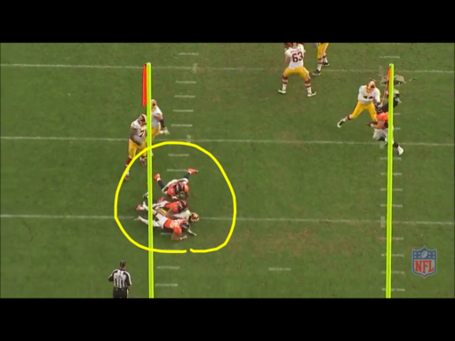 The play results in a sack.

This wraps up the woes that occurred in the play-action pass game against the Broncos. How do these compare to those identified in the drop-back breakdown? Do you see similar problems or different ones? Did the Oline hold up better in the play-action game? Do you forgive Kyle for the 2nd pass while tied 21-21 now knowing that he was using the play he saved since the first half that looked like a guaranteed touchdown? Discuss.