At one point this past Sunday, all was right with the world.  My Redskins were up 21-7 on the Denver Broncos and the staff and I were having big dreams about how a win like this could launch the rest of our season on a playoff push.  Before we could pop the cork on our victory champagne, however, our dreams were dashed and we were brought back to reality as the Redskins quickly gave up 600 points in the fourth quarter.  Then, while we drank our defeat champagne, we thought perhaps a victory in the Hump Day Pick'em would raise our spirits.  Last week, we decided to take the George Costanza "do the opposite" approach with my picks.  That strategy led me to a 6-7 record, which gave me a solid, if unspectacular, total of six points.  Would that be enough to hold off the insatiable contestants? Here were the Week 8 results:

Congrats to washingtonwin!!!  Color me impressed, as this is your second victory of the 2013 season.  Please email your address again and I will get your prize right out to you!!

So another losing week brought my season record to 49-69-3.  Trudging along and not wanting to dwell on the negative, we move on to Week 9.

Cincinnati Bengals (-2.5) at Miami Dolphins: No team of destiny has gone through a whole season without a few hiccups along the way.  This week, Miami returns to the dominant Dolphins team we know and love.  Pick: Dolphins (+2.5)

Atlanta Falcons (+7.5) at Carolina Panthers: After starting the season 0-2, the Panthers have won four out of their last five games.  Due to the recent success, Cam Newton has had to increase his helmet size three times this month.  Pick: Falcons (+7.5)

Minnesota Vikings (+10.5) at Dallas Cowboys: After seeing Calvin Johnson get 329 receiving yards last week against the Cowboys' secondary, Vikings wide receiver Greg Jennings has been trash-talking this week, saying he predicts about a 60 yard day for himself.  Pick: Vikings (+10.5)

New Orleans Saints (-5.5) at New York Jets: In part two of the annual "Ryan Olympics", the Saints' defensive coordinator, Rob, will square off against his brother and head coach of the Jets, Rex.  Part one will be a thumb wrestling match held prior to the game, and part three (and the potential tie breaker) will be a sack race scheduled for Thanksgiving Day.  Pick: Saints (-5.5)

San Diego Chargers (PK) at Washington Redskins: The Redskins have never lost to the Chargers at Fed Ex Field on the 3rd of November.  Pick: Redskins (PK)

Philadelphia Eagles (-2.5) at Oakland Raiders: The Eagles will go with Nick Foles as their starting quarterback.  Being ever the preparer, Eagles wide receiver DeSean Jackson has several different complaint rants ready going into this game in the likely event that Matt Barkley sees some action as well.  Pick: Raiders (+2.5)

Tampa Bay Buccaneers (+16.5) at Seattle Seahawks: Congrats to Tampa!  With the Jaguars on their bye, the Bucs are officially the worst team in the league this week.  Pick: Seahawks (-16.5)

Baltimore Ravens (-2.5) at Cleveland Browns: Jason Campbell will get his second straight start for the Browns.  Ticket sales in Cleveland immediately reflected the excitement of the announcement by remaining stagnant.  Pick: Browns (+2.5)

Pittsburgh Steelers (+7) at New England Patriots: In a move misunderstood by all but his closest friends, Patriots coach Bill Belichick reached out to the Steelers organization this week and offered to accept a game concession now in order to save everyone the time and hassle on Sunday.  Pick:  Patriots (-7)

Indianapolis Colts (-2.5) at Houston Texans: The Colts go to Houston to face Case Keenum and the Texans.  When asked what he thought about the matchup, Colts quarterback Andrew Luck laughed and admitted they were treating this as "a second bye week" and mostly using their time in Texas to hit up quality brisket restaurants. Pick:  Colts (-2.5)

Chicago Bears (+11) at Green Bay Packers: The Packers have won ten straight regular season games and 23 out of their last 24 at home.  The Bears are cool, too.  Pick: Packers (-11)

So there are my Week 7 picks.  The winner this week will have this fabulous prize to look forward to: 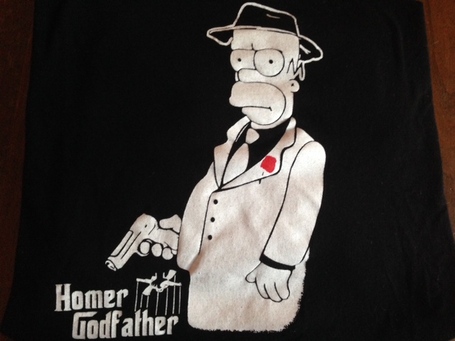 That's right - this super sweet and never worn Homer Simpson shirt from Europe.  It says XXL on the tag but in America it fits more like an L.