After the Washington Redskins were defeated by the Denver Broncos, there was plenty of blame to go around and everyone took sides.

"The O-line isn't designed to drop straight back!"

"RG3 only looks at one WR then scrambles!"

That's a basic summary of what I've seen on twitter since the game ended. Lets take a look at what happened this past Sunday with the drop back game and see which ones, if any, have merit. 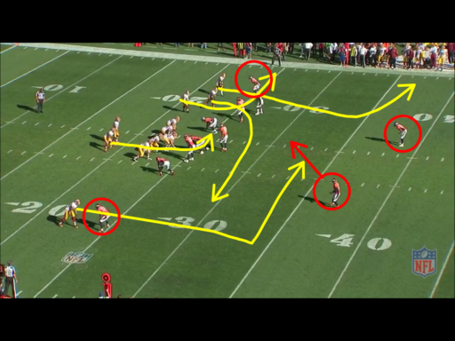 Here's the first drop-back play. Robert Griffin III will have 5 options. Broncos showing a Cover 2 but shift to Cover 1 man (Everyone is in man coverage with 1 safety over the top). 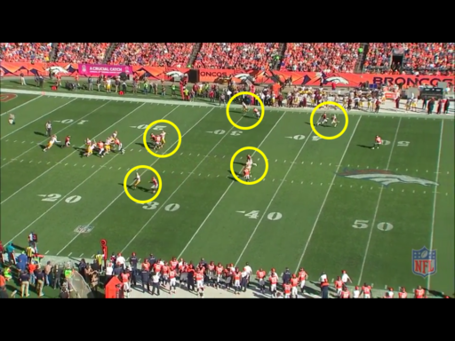 The offensive line holds steady for nearly 5 seconds but who is RG3 suppose to throw it to? He makes three reads then takes off for a gain of one. 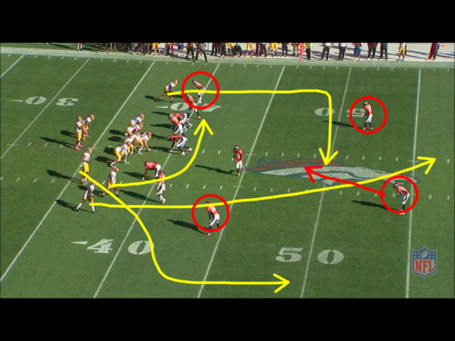 On this play, again, Broncos show a Cover 2 but shift into a Cover 1 man. RG3 should know he has man coverage because a defender followed a WR pre-snap. 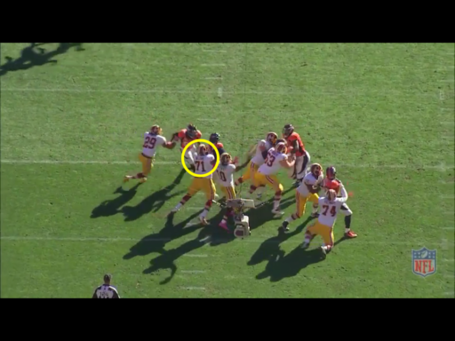 Trent Williams gives up quick pressure to Von Miller on a bull rush. RG3 has no room to step up when he throws. 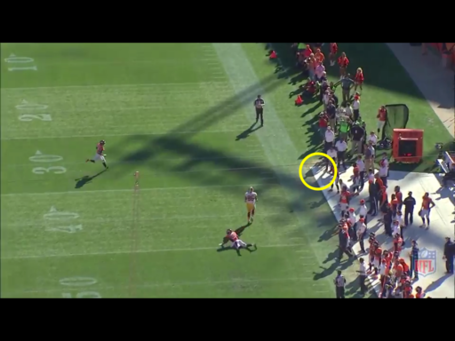 RG3's pass intended for Jordan Reed down the sideline sails out of bounds. 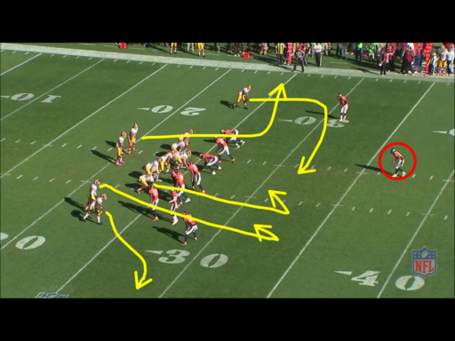 Here's a 3rd and 10. An obvious passing situation and Broncos don't even disguise their coverage. Cover 1 man. 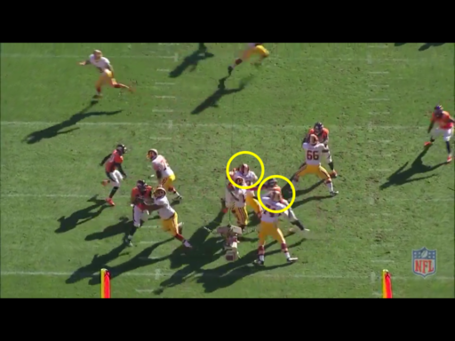 Will Montgomery and Tyler Polumbus both give up quick pressure. RG3 can't step into his throw and his arm gets hit. 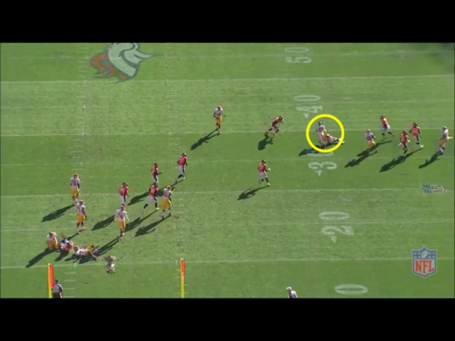 The ball floats in the air and SOMEHOW lands in the hands of Santana Moss. It looks like RG3 was looking at J.Reed first, then threw to Moss. 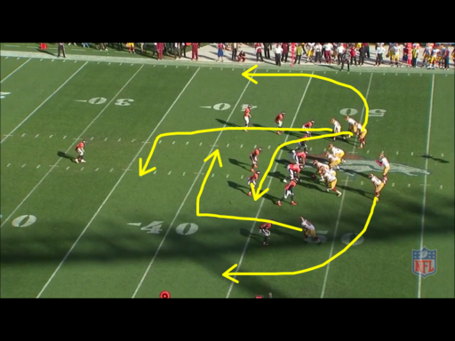 This is a 3rd and 2. Broncos are running a Cover 1 man (notice a pattern?). RG3 wants Roy Helu on the wheel route to the bottom of the screen. 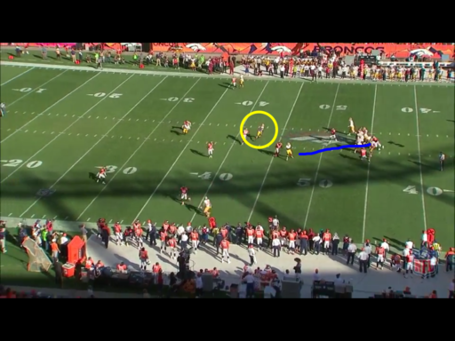 He sees Helu covered and throws to Josh Morgan (blue line). It showed good awareness that he knew where Morgan would be when he came off Helu but Pierre Garcon is ALSO running a crossing route, which is deeper, and it would have gotten the first down. Morgan didn't. 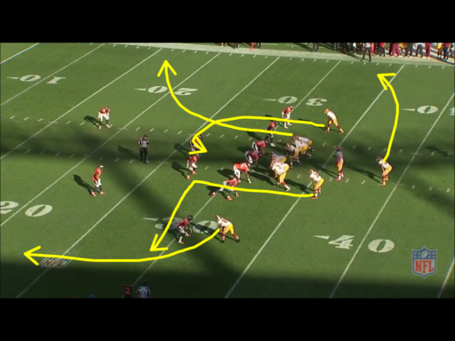 Broncos are going to play a Cover 2 zone here. RG3 wants to hit Darrel Young on the out-route towards the bottom of the screen. 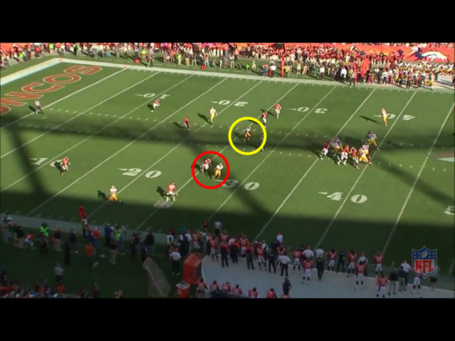 The LB takes the out-route away (red circle) and RG3 scrambles. If he had made a 2nd read though, he would have seen he had a wide open WR in the middle of the field (yellow circle). 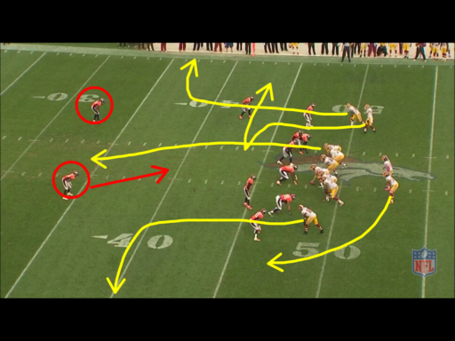 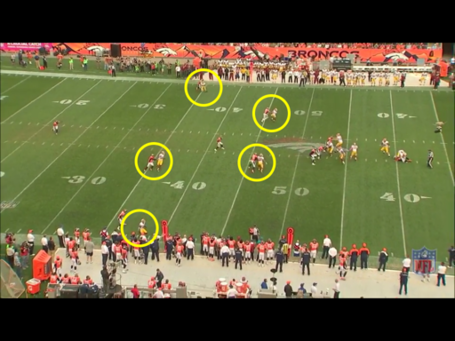 RG3 makes three reads. This is what he sees before he pulls it down and takes off. No one open. 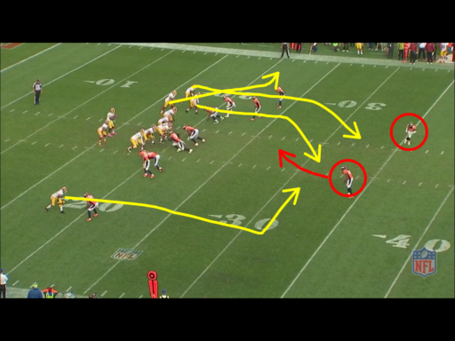 Redskins running a double post from the left side. Broncos show a Cover 2 and shift to a Cover 1 man. 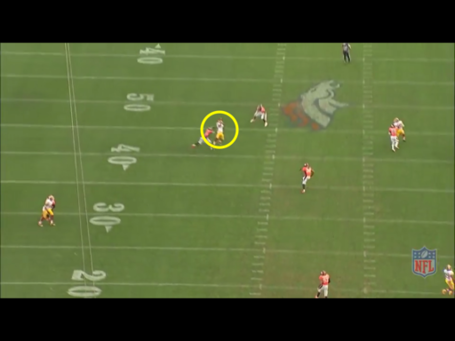 Kory Lichtensteiger gives up a little pressure but RG3 makes the correct read and hits Aldrick Robinson right in the hands. He drops it. That's a back-breaker. You can't let passes like that hit the ground. 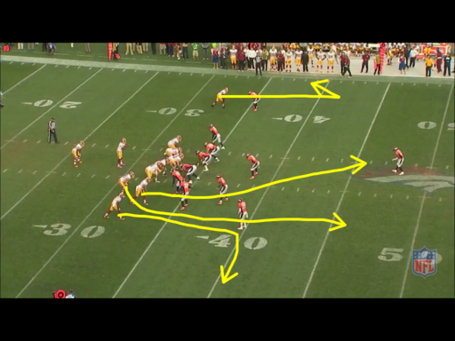 Broncos run a straight Cover 1 man here. A.Robinson actually gets open on the out route towards the bottom of the screen on this play but he wasn't RG3's first read. 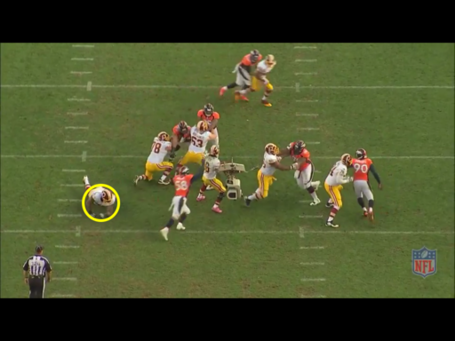 Trent Williams gives up pressure to Von Miller so fast (Trent lost his footing and fell) that RG3 doesn't have time to look elsewhere. Sack/fumble. 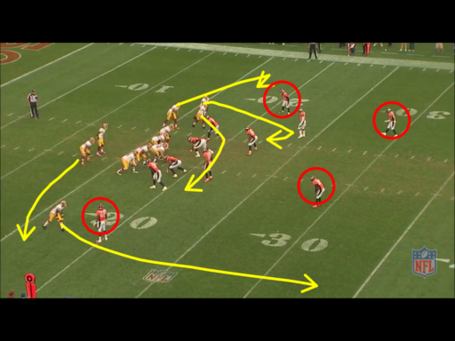 For this play, Denver shows a Cover 2 and stays in a Cover 2 zone. RG3 is going to stare down Garcon on this play. 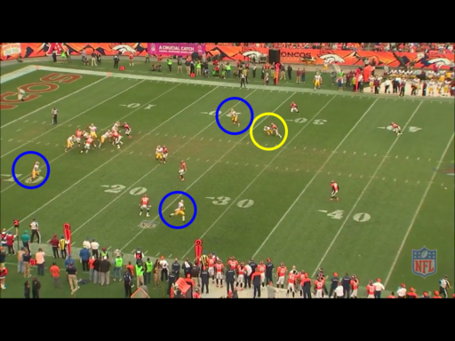 As RG3 is pulling back, Garcon is already falling (yellow circle). In fairness to RG3, he has a quick release so it would be hard to pull down. But, Reed is open at the top of the screen, Helu is open in the flat, and Leonard Hankerson is open down the the bottom sideline. Instead, it's intercepted. 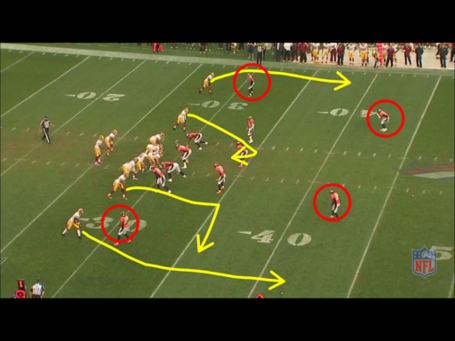 Here's a spread formation with 11 personnel (1 RB, 1 TE). RG3 is looking at out-route by Jordan Reed at the bottom of the screen. 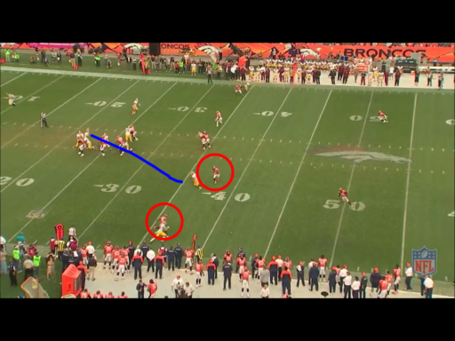 RG3 gets the ball out on time as Reed separates from the LB and before he enters the CBs zone. Unfortunately, J.Reed just flat out drops the ball. 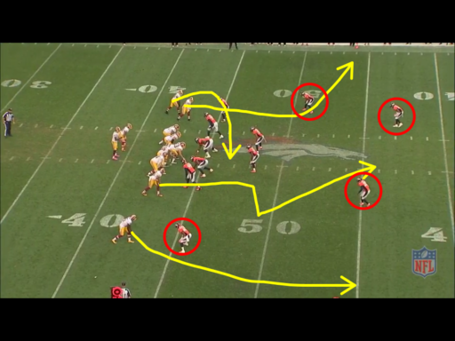 Lastly, Denver had been running Cover 2 zone late in the game so Kyle Shanahan calls a Cover 2 "breaker." Has a double move by J. Reed in slot which should give him the seam. Unfortunately, the Broncos shift to a Cover-1 man. 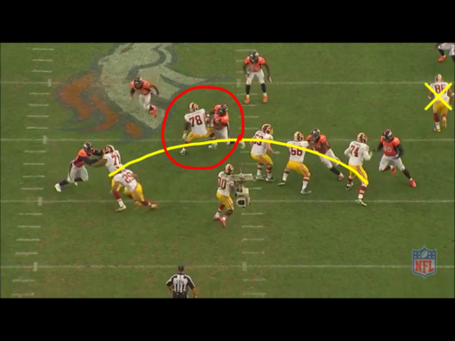 The O-line drops back and forms a good pocket except Kory L. who explodes off the ball and lunges at DT. Why? Jordan Reed is only 3 yards off the line of scrimmage and Kory is already beat by DT who now has a free run at RG3. 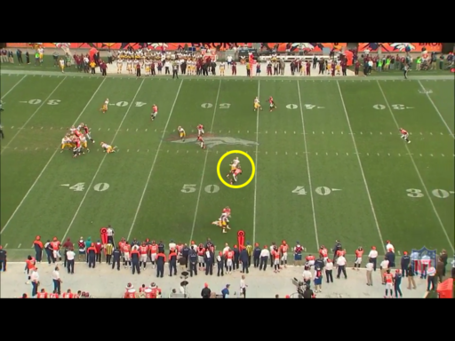 Reed's double move gives him inside leverage and he is open towards middle of the field. The free hit on RG3 makes the ball said though and it gets intercepted.

Those are the drop-back passing woes of the 2013 Washington Redskins. Where do we go from here? How do we correct the mistakes? Who is most at fault? Discuss.Tomorrow, I'll be posting an article on the play-action passing woes vs. Broncos so keep an eye out for that.