All-22 Film Breakdown of Redskins defense vs. Raiders (1st Half)

You know the deal, lets get right into it! 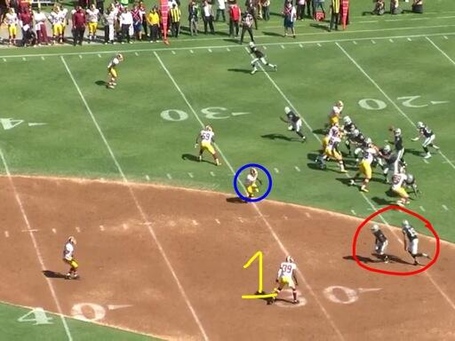 Here's an early 3rd down play. It's 3rd and 4 to be exact. Now this frustrates me. The offense only needs four yards. OAK has two WRs at bottom of screen with only Amerson out there. That's two on one and you always play the numbers game. Whether it's a pop, stay, or swing pass, this is going to be successful. I understand the LB is going to come help but they only need 4 yards. Play tighter, close the windows. This is like taking candy from a baby. Don't like the call. 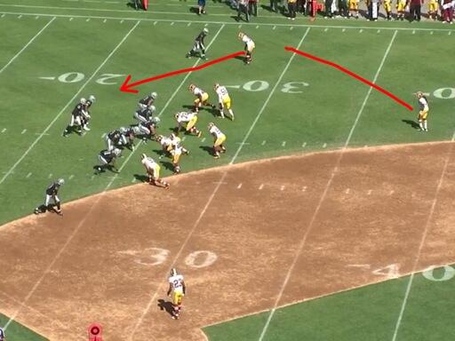 Here is a CB Blitz from the short side of the field. That means the Safety (Meriweather) has the outside WR in one on one coverage. This is RIGHT before the snap so WHY is Brandon Meriweather so far off? Disguising it? It's 3rd and 4 and Meriweather is 13 yards off. Some people want to blame the scheme but I can't imagine its drawn up with that big of a cushion. 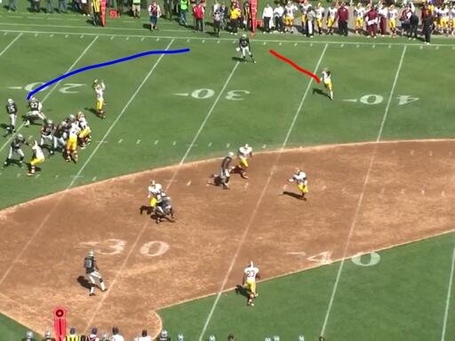 Matt Flynn recognizes it. Denarius Moore stops route, catches it, leaves him one on one with Meriweather in space. Something that has been a lose for Redskins defenders as of late. 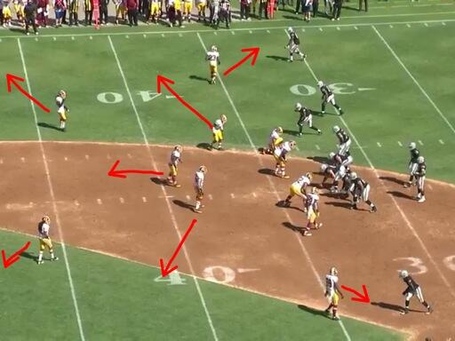 This is a 3rd and 10 play. Redskins are playing Cover-2 Zone. CBs press WR and stay in flat area. Meriweather and EJ Biggers drop and split field in half. Fletcher drops straight back while Josh Wilson and Perry Riley drop at 45 degree angles. 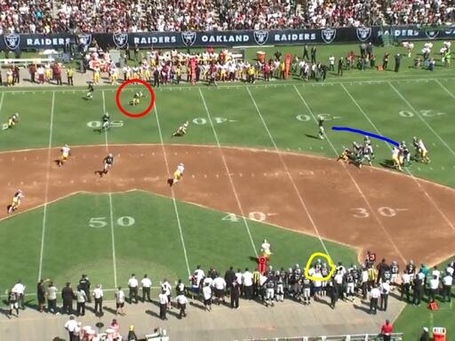 Instead of staying in flat, DeAngelo Hall decides to trail WR on his side leaving a huge gap in coverage for RB to leak into. Flynn delivers him the ball. (Insider note: See the yellow circle at bottom of screen? That's Denarius Moore. Why is he on the sideline? Because Amerson jammed the hell out of him and put him there. That's why!) 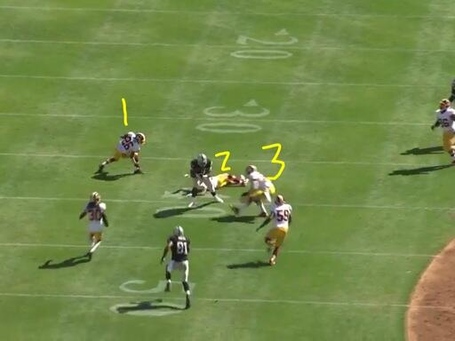 RB breaks not one, not two, but THREE tackles to convert on 3rd and 10. 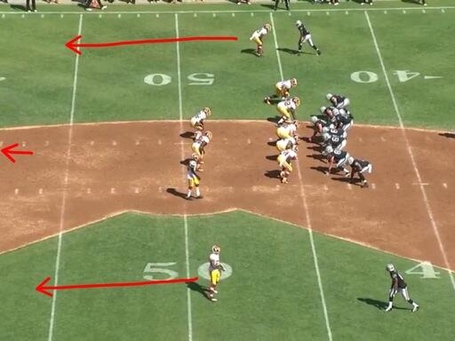 Here's bad Amerson. Redskins are in Cover-3. Amerson is responsible for deep 1/3 of the field but is in press coverage. (Admittedly, I'm going to do research on this because I've seen it more than once. Maybe Haslett trusts CB on short side of field to press even in Cover-3. Haven't really been able to break down tapes until this game so we will see.) 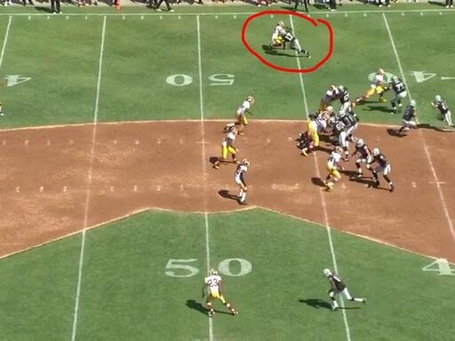 Moore gives a quick outside move and Amerson goes with it. Moore goes right by him and stacks over top of him quick. 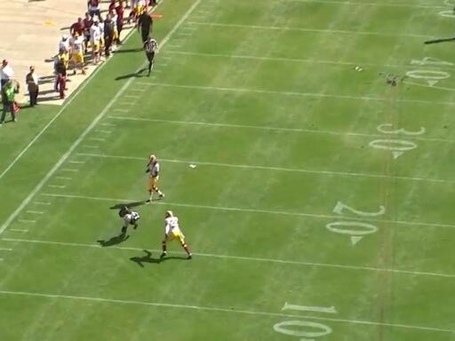 Flynn stares down middle of the field to hold the safety (surprised by this) and hits Moore to right for big gain. Amerson is still adjusting to pro game and press coverage. Didn't do much press in college but I like his progression thus far. 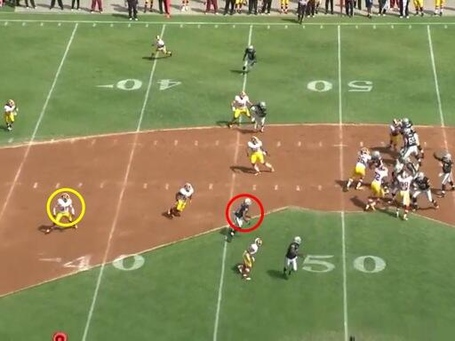 I put this in the good section because on the stat sheet this goes down as a tipped pass by Brian Orakpo. Flynn takes a three step drop and fires for the hitch route. Orakpo tips it and the ball floats in the air. I'm a homer for Bacarri Rambo so this is more opinion than analysis but I think Rambo picks off this pass. I also think Biggers would pick this pass off (Although I know why Doughty is playing over Biggers on a run down.). 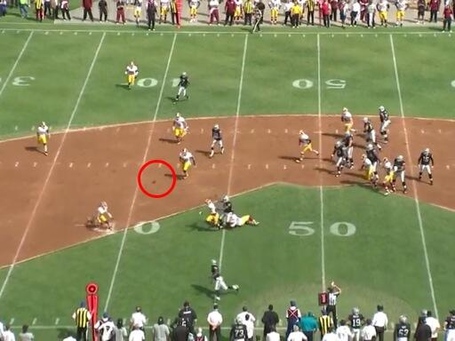 Instead, the athletically limited Doughty can't get to the ball. I'm not a Doughty "hater" I just don't like his name announced with the starters. I think Rambo should take his bumps with the rest of the defense and learn on the field. The defense hasn't gotten tremendously better with him off it. This would have been a nice, early turnover. 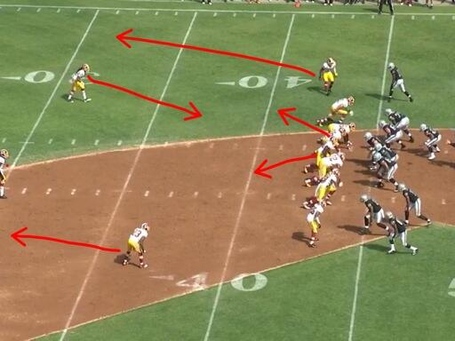 On this play, Redskins are in a Cover-2 shell here that shifts into a Cover-3. Meriweather comes down, Biggers takes deep middle and LBs drop into coverage at the snap. 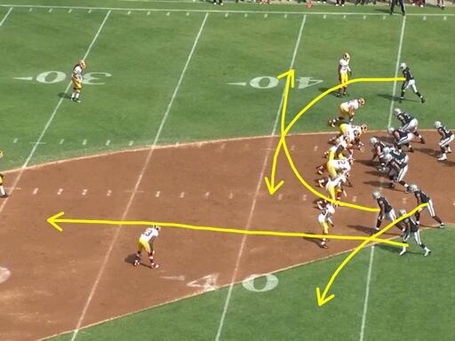 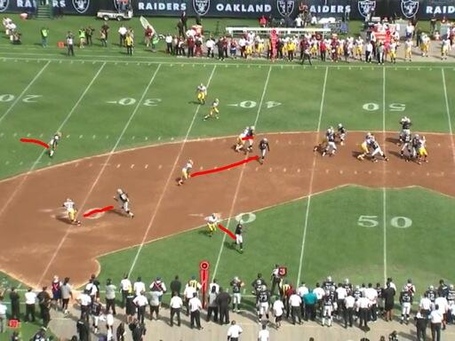 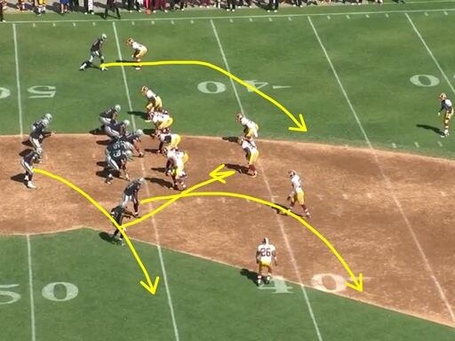 Here's a 3rd & 2 play. Flynn looking for hitch route in middle of field to pick up first down. 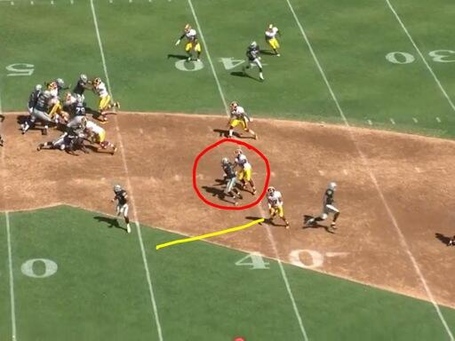 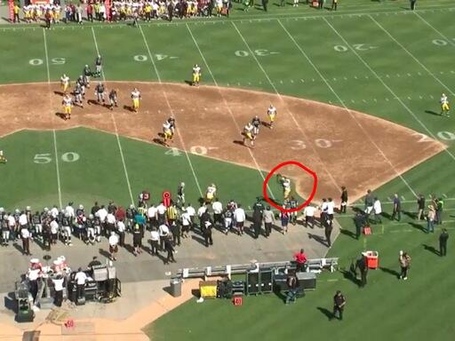 Flynn's only option is to hit WR who ran corner route but he is out of bounds. Catches ball though. I would like to see Wilson contest that and knock it away. 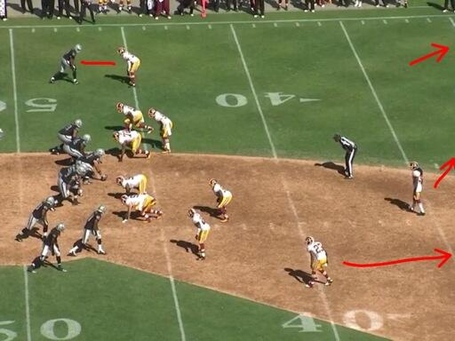 Here's an interesting look. Hall, Meriweather and Biggers drop into a Cover-3 while Amerson stays down and plays man coverage. In fact, all other defenders are in man coverage as well. Flynn wants Denarius Moore on a Sluggo-Post. 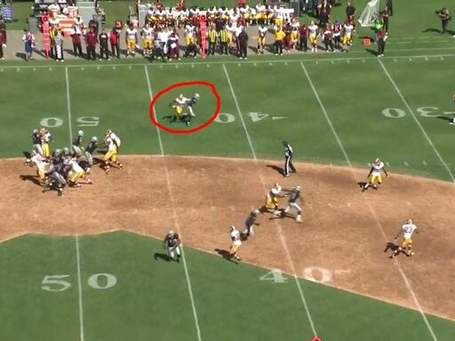 David Amerson presses Moore off the line and under-cuts BOTH moves on route (very impressive). 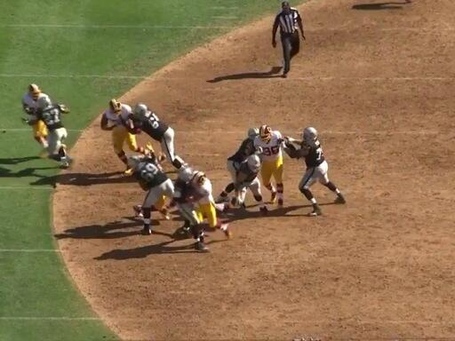 Meanwhile, Ryan Kerrigan has already blown past Tony Pashos and crushes Flynn before he can even think about going to 2nd read. 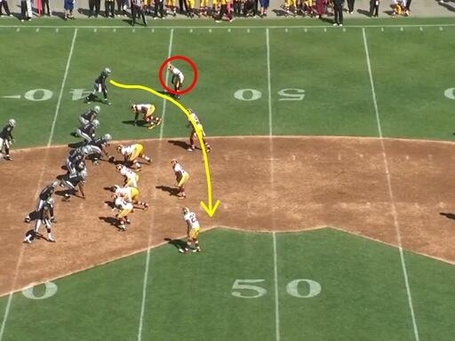 This goes in the good section because it's an INT returned for a TD. Watching it live, I thought it was a great play on Amerson's part, showing good recovery speed. After reviewing it, it was actually just a terrible play by Moore. He has a simple crossing route with Amerson in man coverage. 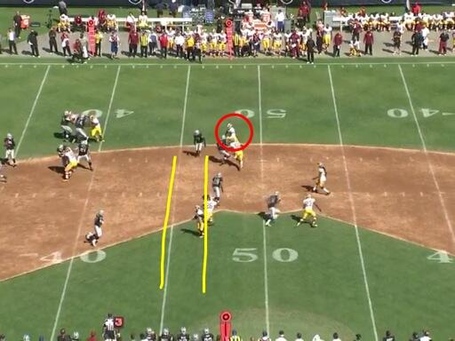 Amerson actually gets "rubbed" by another route and Moore has free reign over middle of the field. Football 101 says, "if you're going across the middle in zone coverage, you sit down in a zone. If it's man coverage, keep on running. For whatever reason, Moore stops running. 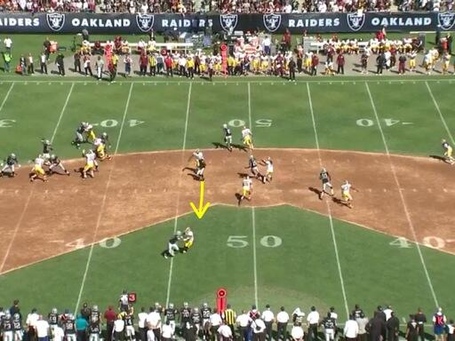 Look at the room Moore would have had if he kept going. Instead, he stops and Amerson undercuts route. Flynn doesn't double clutch or anything, but Moore stopping startled Flynn and changed his throw at last second which made it easy for Amerson. 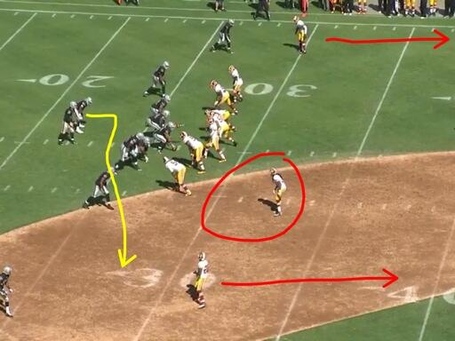 This is a 3rd and 2 play. Redskins are in a Cover-3 with Meriweather down in the box. Flynn sends back in motion and is looking to hit him on speed out route. 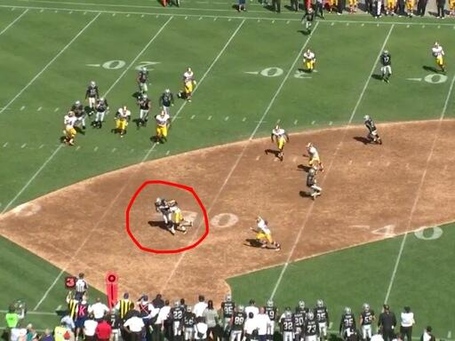 Meriweather diagnoses it quickly, hit him and didn't give him an inch. Yes, a 1 on 1 tackle is a highlight at this point. Especially, if it prevents a 1st down.