If you missed the Stretch Series vs. Bears (Part 1), you can find it HERE. Now, continuing from where I left off: 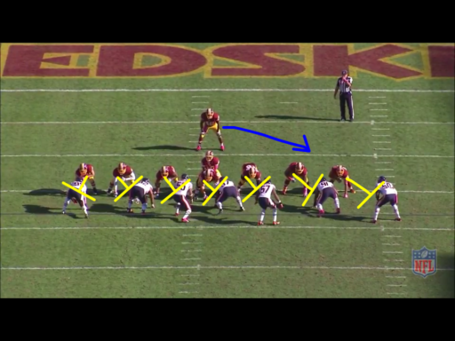 Zone Left out of Singleback 12 personnel. Bears show double A-gap blitz which makes it easy for Kory Litchensteiger and Chris Chester to get their 2nd level blocks. 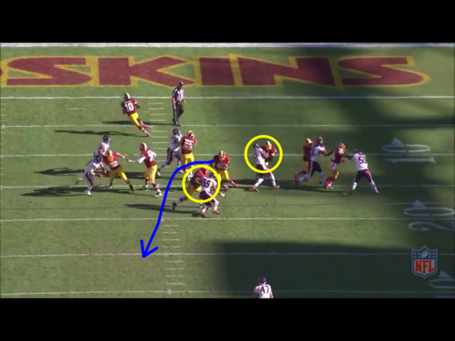 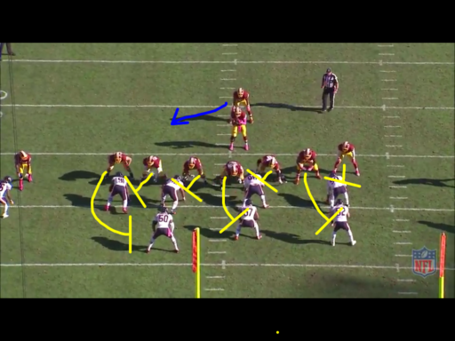 Zone Right from Pistol formation. 12 personnel. Helu in the backfield. 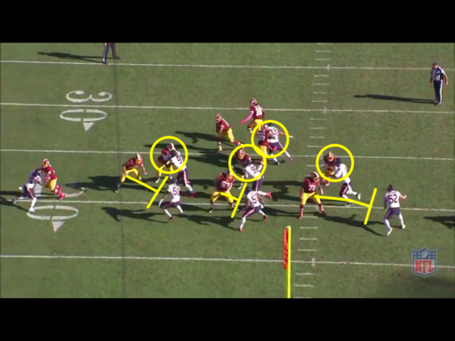 This is EXACTLY how Mike Shanahan draws it up. You lock up the 4 rushers and look at the angles Trent Williams, Will Montgomery and Logan Paulsen have on the three LBs. Unfortunately, Paulsen (far left) doesn't take an aggressive angle further up the field to seal LB. 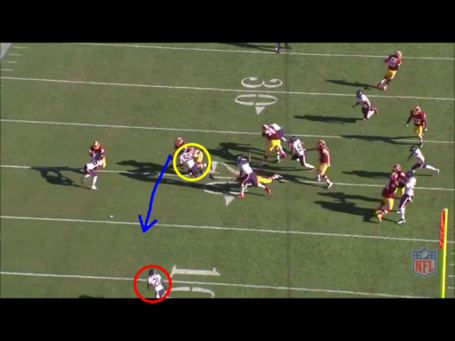 Paulsen doesn't attack block. The LB attacks him. LB gets outside shoulder past Paulsen and forces Helu towards sideline. Still a good gain, but if Paulsen sealed that block correctly, it would have been Helu, 1 on 1 with the safety. END RESULT: Helu - Gain of 8 yards. 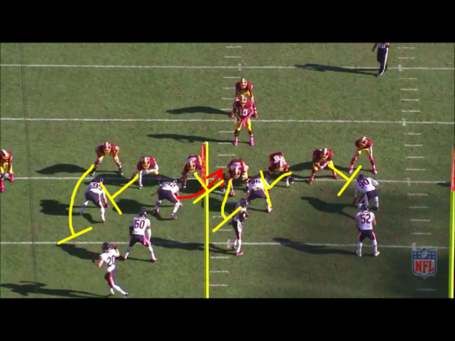 Zone Right out of Pistol formation. 12 personnel with everyone bunched into line of scrimmage including WRs. Bears DT still lining up in B-gap and shooting to A-gap. 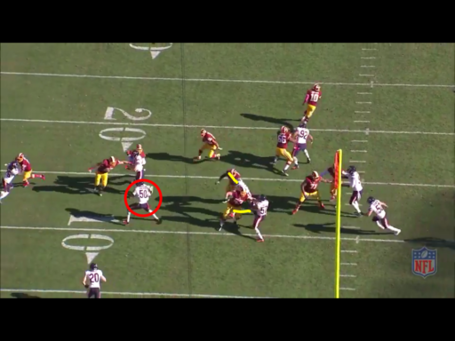 DT penetrates quick but Chester washes him past play. Monty to 2nd level (yellow line) while Kory drives his DT all the way across the field (yellow line). Unblocked LB in the hole (in red) but doesn't attack. Instead, he flows with the line and takes himself out of the play as Helu cuts. 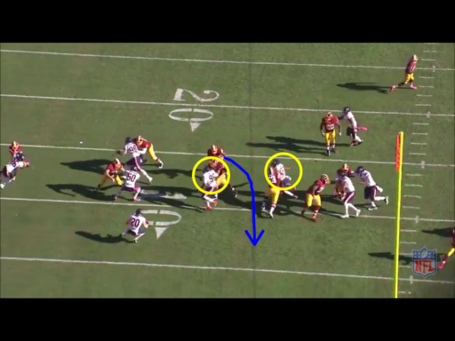 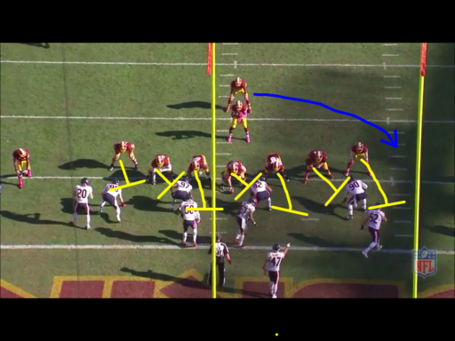 The very next play, they run the same formation with the same personnel but flip the play. Zone Left. 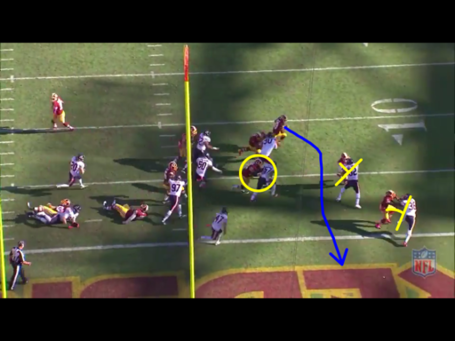 Kory releases to 2nd level and what looks to be very close to a holding call on the inside (yellow circle). Niles Paul and Aldrick Robinson with key blocks on the outside. END RESULT: Helu - 3 yard Touchdown. 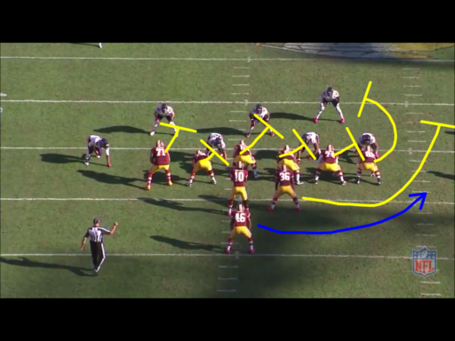 This is Zone Right from Pistol formation. 21 personnel. 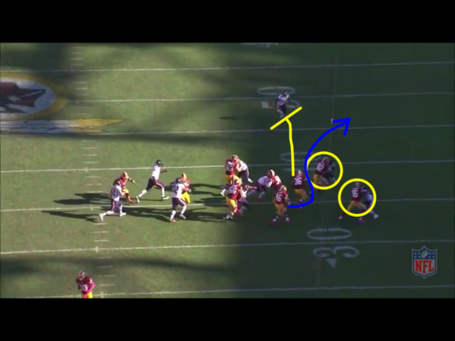 Paulsen chips the DE giving Tyler Polumbus advantage then heads to the 2nd level. Hankerson (far outside yellow circle) blocking but needed to sustain it a little longer. 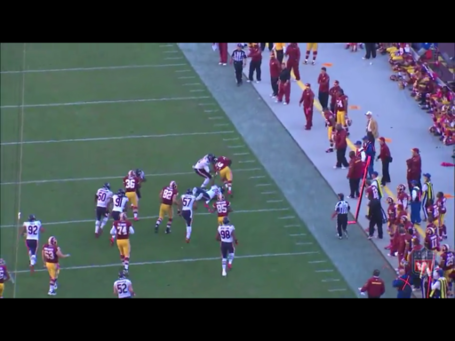 Hankerson lets go of his guy as Morris goes by. The CB grabs a hold of Alf's jersey and Morris drags him for 10 yards until Peppers can get to him. Morris still churns legs and powers for more. If Hankerson held block a little longer, Morris would have been off to the races. Impressive hustle by Peppers who was the unblocked DE on backside. END RESULT: Morris - Gain of 21 yards. 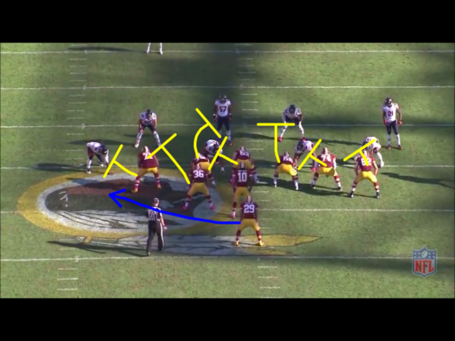 Another Zone Left from Pistol with 21 personnel. 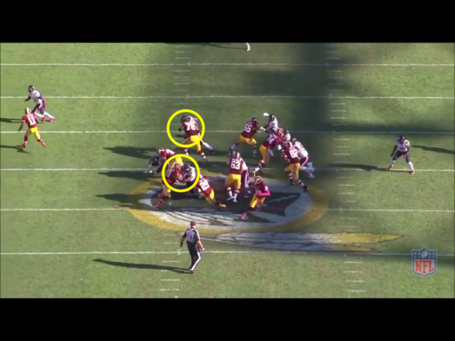 Peppers uses a swim move on Trent Williams right off snap and forces Helu to bounce it far outside. Lichtensteiger has block on 2nd level (up-field) so at this point we are okay. 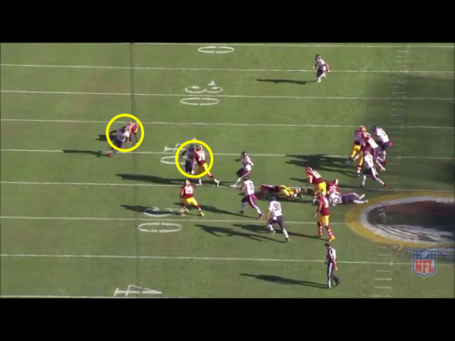 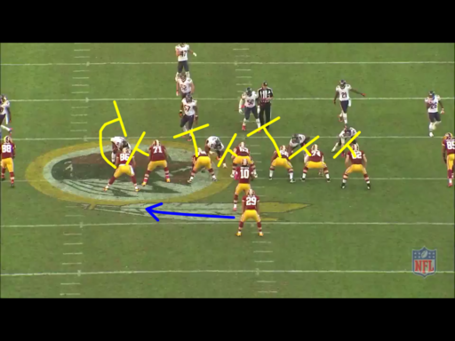 Zone Left from Pistol with 12 personnel. 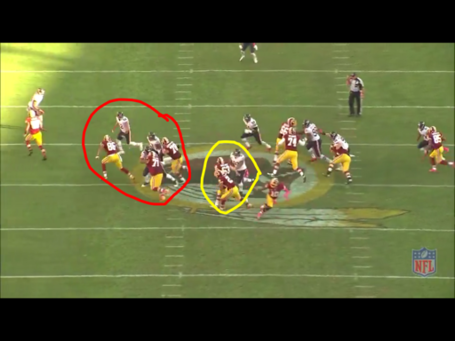 Monty gets pushed so far in backfield (yellow circle) so fast that he trips Helu as soon as he receives the hand-off. T-Will, Kory, and Jordan Reed begin causing an awkward cluster (red circle). 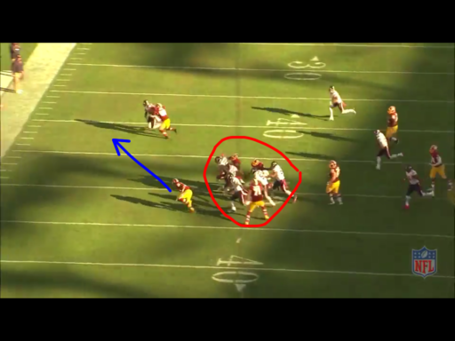 Helu STILL trying to recover from Monty's trip. TWill, Kory and Reed manage to block 5 guys and give Helu the outside. END RESULT: Helu - Gain of 6 yards. 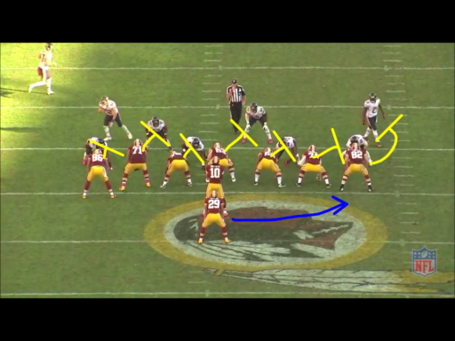 Same play as the last one but flipped. Zone Right from Pistol formation with 12 personnel. 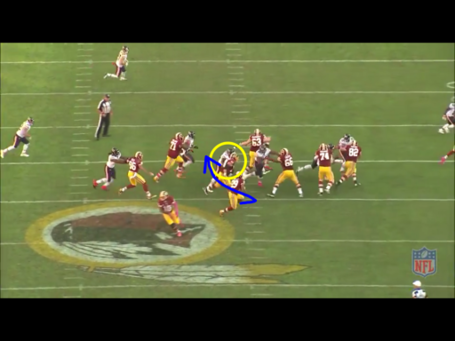 DT just powers Lichtensteiger into backfield with one arm (fully extended). Kory can't catch his balance. Helu sees this and tries to cutback. 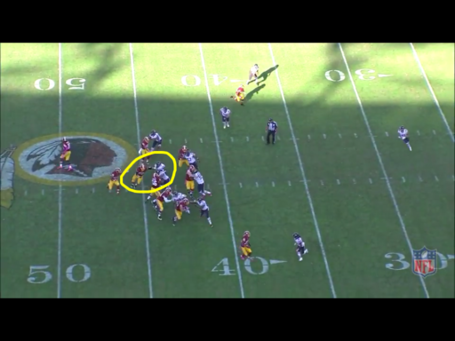 Here's another angle of the depth of penetration and showing the DT is doing this with one arm extended. 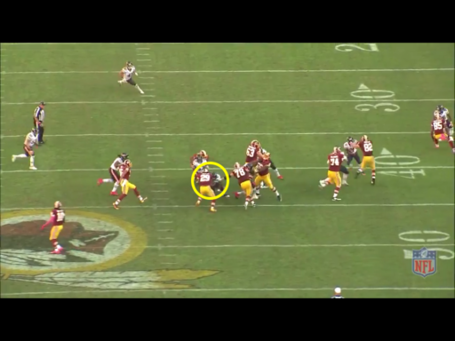 When Helu tries to cut back, DT chucks Kory to side and hits Helu straight on. END RESULT: Loss of 1 yard.

That is all for the Stretch Series (Part 2). I hope breaking it into two posts made it more readable. What are your thoughts on the Stretch Series? Are defenses figuring it out? Is the Oline dictating the success or are the RBs dictating success? Which Olineman is under-performing? Is Morris vs. Helu a debate yet?