The staff and I here at the Hump Day Pick'em offices had a great weekend watching our beloved Redskins beat the Bears to get their second win of the season.  While celebrating the win, it occurred to me that the only thing sweeter would be to take the victory in the Hump Day Pick'em in Week 7.  I was fairly pleased that, after several weeks of finishing with a losing record, I broke out of my funk with a respectable 8-7 outing, giving me a healthy 8 points for week.  Would it be enough to beat the crumb-snatching contestants?  Here were the Week 7 results:

Congrats to ENsDad27!!!  Please email me your address and I will get your fabulous prize right out to you!!

There is a classic Seinfeld episode (aren't they all?) in which Jerry's best friend, George Costanza, is reflecting on his life and comes to the realization that every decision that he has ever made has been a terrible one, and thus he begins doing the opposite of what his intuition tells him.  Since my record so far this year is so awful at 43-62-3 and almost everything that has seemed like a good pick at the time has led me astray, I have decided to incorporate the George Costanza approach and see where it takes me.  With that in mind, we move on to Week 8.

Carolina Panthers (-6.5) at Tampa Bay Buccaneers: The NFL Network is considering moving this game to The RedZone Channel and playing a repeat of the "Top 10 Things We Love About Tim Tebow" three times instead.  Pick: Panthers (-6.5)

San Francisco 49ers (-16.5) at Jacksonville Jaguars: In what is the surest indication that the people of England are becoming more knowledgeable NFL fans, this game did not sell out and will be blacked out in London.  Pick: 49ers (-16.5)

Dallas Cowboys (+3) at Detroit Lions: After my strategy worked perfectly on DeMarco Murray, I have picked up Cowboys wide receiver Terrance Williams in two of my fantasy leagues to derail his promising season.  Pick: Lions (-3)

New York Giants (+6.5) at Philadelphia Eagles: In an attempt to regain some team unity and spirit, Eagles coach Chip Kelly tried to arrange a pep rally out on the quad and was disappointed when he learned the team did not have one on the grounds of their practice facility.  Pick: Giants (+6.5)

Cleveland Browns (+7) at Kansas City Chiefs: The Browns are going with Brandon Weeden at quarterback again this week, despite their offensive woes with him under center.  This confirms reports that backup quarterback Jason Campbell is the only man in Cleveland less popular than Lebron James.  Pick:  Chiefs (-7)

Buffalo Bills (+12) at New Orleans Saints: The Saints have not lost a game in New Orleans yet this year, but neither has Thad Lewis.  Pick: Bills (+12)

Miami Dolphins (+7) at New England Patriots: After both teams suffered devastating losses last week due to last second field goals, look for my team of destiny to rebound and hand the Patriots their second straight loss.  In other news, for a limited time only you can buy six WWLT bracelets and get the seventh for just one penny.  (Only while supplies last.)  Pick: Dolphins (+7)

New York Jets (+6.5) at Cincinnati Bengals: After getting a big win last week, the Bengals will revert back to continuing their long and storied history of disappointing their fans.  Pick: Jets (+6.5)

Pittsburgh Steelers (-3) at Oakland Raiders: The Raiders have not won their first game back after a bye in ten years.  When Raiders brass became aware of that fact, as a way to show they are now more "fan-friendly" they initiated a program in which fans could exchange their game tickets for tickets to a Demi Lovato concert that will be held there later in the year.  Pick: Raiders (+3)

Atlanta Falcons (+2.5) at Arizona Cardinals: I believe it was the great Vince Lombardi who said "Whenever the Falcons play the Cardinals, the whole world stops what they're doing and watches."  Pick: Cardinals (-2.5)

Green Bay Packers (-9.5) at Minnesota Vikings: Josh Freeman has been named the starter at quarterback for the Vikings again.  After his underwhelming performance on national TV last week, NBC has advised Bob Costas to have several political statements ready as they may go back to him a few more times if interest in the game begins to wane.  Pick: Packers (-9.5)

Seattle Seahawks (-10.5) at St. Louis Rams: And finally, in the dessert portion of the national TV three-course meal special, kudos to the schedule makers as America is subjected to what should be another thriller of a game on Monday night.  Pick: Seahawks (-10.5)

So there are my Week 8 picks.  The winner this week will have this fabulous prize to look forward to: 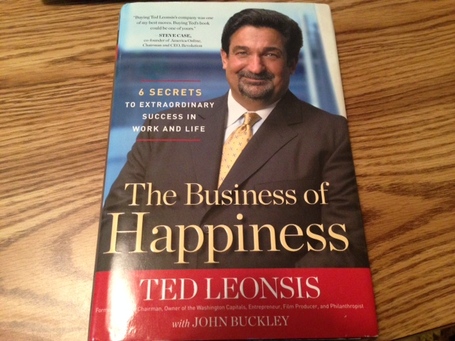 That's right - an autographed copy of the New York Times best seller The Business of Happiness.  Just to be clear, it's autographed by me and NOT by famous Washington sports mogul Ted Leonsis. 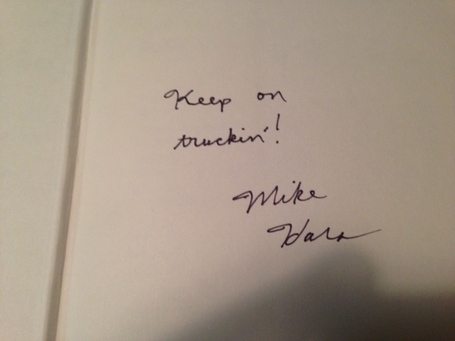