In a week in which I was finally able to celebrate a Redskins' victory on Sunday, I was also hoping I would be able to celebrate winning the Hump Day Pick'em and deny my contestants a fabulous prize for three straight weeks. For the second week in a row, I finished above .500 with a, 8-7-1 record, giving me 8 points. Would it be enough to hold off the piranha-like contestants? Here were the Week 4 results:

Congrats to Redskins329 and washingtonwin!!! They both beat me with a total of 10 points. As I stated last week, ties will now be broken by an impartial drawing by one of our beautiful assistants here at the Hump Day Pick'em staff.

Without further ado, here were the results of the impartial drawing: 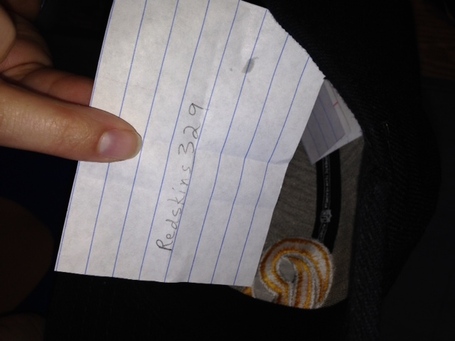 With witnesses from Ernst & Young present, Redskins329 won the drawing and thus has first dibs on the prizes that consisted of The Scary Stories Treasury and the Knob Creek flask(which retailed at $7.95).

Because I am feeling generous, I will allow washingtonwin to take the prize that Redskins329 does not take. Please email me with your addresses and we will get them right out to you. Congrats to the two winners and thanks again to all who participated. My total record for 2013 has now been pushed to 27-34-3.

Buffalo Bills (+4.5) at Cleveland Browns: Browns teammates are fearing their quarterback may be getting too cocky, as he showed up at practice early on Monday and left "Hoyer Time" t-shirts and head bands in everyone's locker. Pick: Bills (+4.5)

Kansas City Chiefs (-2.5) at Tennessee Titans: With Jake Locker out injured, the Titans will turn to Ryan Fitzpatrick, who has a 4-1 lifetime record against the Chiefs, as their starting quarterback. Chiefs coach Andy Reid, who is well aware of what Fitzpatrick is capable of, gave his team an extra day off this week. Pick: Chiefs (-2.5)

Baltimore Ravens (+3) at Miami Dolphins: I ordered 2000 WWLTD bracelets, so even with the Dolphins' loss last week we're going to stay the course. (I received a bonus Lauren Tannehill Fat Head and saved 50% in shipping costs if I ordered an extra 1000.) Pick: Dolphins (-3)

New England Patriots (+1.5) at Cincinnati Bengals: The undefeated Patriots are getting points on the road again this week. When asked about the odd spread, Bengals' coach Marvin Lewis called it "unnecessary" and then awkwardly compared it to airbrushing a picture of Tom Brady. Pick: Patriots (+1.5)

Seattle Seahawks (-2.5) at Indianapolis Colts: In possibly the best match-up of the week, Andrew Luck will face fellow second year quarterback Russell Wilson for the first time. Luck gave Wilson a subtle dig on Tuesday, when he stated that Wilson plays pretty well for a "short, chubby, third round pick." Pick: Colts (+2.5)

Detroit Lions (+6.5) at Green Bay Packers: The Packers have won 21 straight regular season home games against the Lions, which is the longest current streak in the NFL. Lions running back Reggie Bush said this week that he feels pretty good about keeping that streak going. Pick: Packers (-6.5)

New Orleans Saints (PK) at Chicago Bears: The undefeated Saints head into Soldier Field to face the 3-1 Bears. After beating my team of destiny, the Miami Dolphins, in Week 4, the Saints no doubt have a date with Karma this week. Pick: Bears (PK)

Philadelphia Eagles (+2.5) at New York Giants: Chip Kelly has petitioned the league to see if he can arrange a home and home with Delaware State starting next season. Pick: Giants (-2.5)

Carolina Panthers (-2) at Arizona Cardinals: Panthers quarterback Cam Newton sent Cardinals safety Rashad Johnson, who lost the tip of a finger in a game two weeks ago, a sympathetic text this week. Newton let him know that he had been through a similar incident last year when he pulled his jersey off too fast and hurt his ears. Pick: Cardinals (+2)

San Diego Chargers (-4) at Oakland Raiders: This game ensures an east coast full of cranky Monday morning commuters, who will have stayed up until 3am to watch it to completion against their better judgment. Pick: Chargers (-4)

Denver Broncos (-7) at Dallas Cowboys: In a bit of gamesmanship, Peyton Manning has asked his defense to let the Cowboys score 21 points first before they start trying. Pick: Broncos (-7)

New York Jets (+9) at Atlanta Falcons: Jets quarterback Geno Smith is tied with Eli Manning for the most turnovers in the NFL with eleven this year. On the bright side, his top two receivers, Stephen Hill and Santonio Holmes, both may be out with injuries in Week 5, and he's healthy. Pick: Falcons (-9)

So there are my Week 5 picks. The winner this week will have this fabulous prize to look forward to: 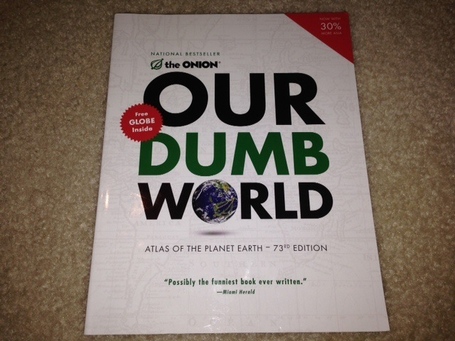 A fake Atlas with lots of made up facts!