All 22-film breakdown of RG3's performance against the Raiders

Share All sharing options for: Hazard's Huddle: RG3 vs. Raiders (1st Half)

You know how this works, so let's get right into it. 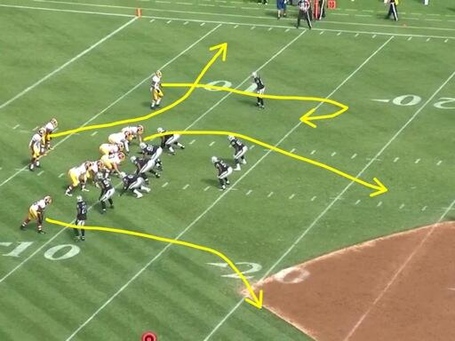 RG3 has said that all he did was watch tape during off-season and during rehab but at times isn't showing understanding of simple things. Hank is running a comeback and Young is heading out into flat. RG3 is suppose to be reading the CB. If CB bails, you throw it to flat, if CB comes up, you throw it to Hank in open zone. 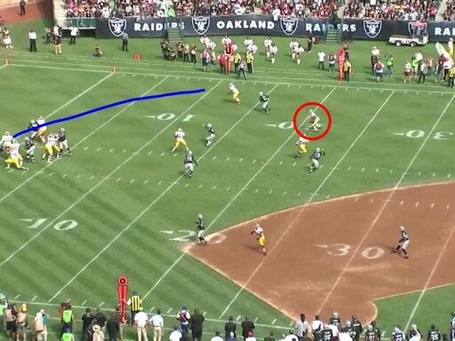 OAK is in Cover 2, CB presses Hank for 8-10 yards then heads to flat. RG3 hesitates when seeing jam on Hankerson and waits to long to dump it to Young as the CB has already headed to flat leaving Hank open. 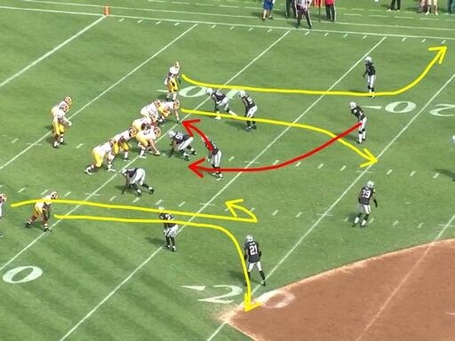 Here is a 3rd down play where RG3 NEEDS to identify double A gap blitz with LB and DB. Should be easy 1st down because he has Paulsen running a route right into vacated zone (middle of the field). 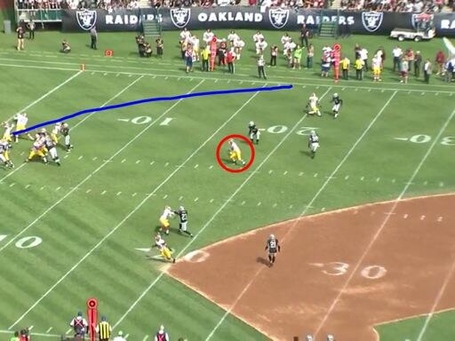 RG3 doesn't recognize it, instead stays with 1st read and throws at CB who hasn't even turned hips yet. Out route won't work against that. Meanwhile, Paulsen has free reign over middle of field. 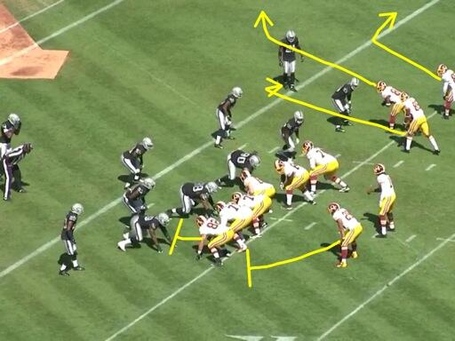 Here's a diagram of the Intentional grounding penalty. 11 Personnel. 3 WRs to right. Only skill players on left are staying in to block. RG3 NEEDS to be aware enough of the play design that he has no pass catchers going to the left. If he throws it to back right of end zone, no intentional grounding call. Griff needs to know where all his WRs are going to be. Maybe he thought he was outside the tackle box? 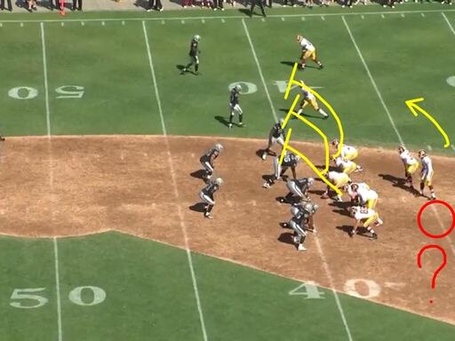 On this play, we have a screen right. The OLine knows it and Helu knows it. Does RG3? He carries out a play action fake left to no one on this play. The only person he could fake the hand off to is headed right to catch the screen pass. Weird. 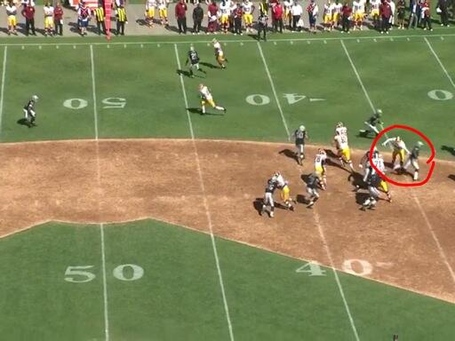 I don't think this screen pass would have ended up working but Niles Paul needs to make a better attempt at a block if it's even going to stand a chance. 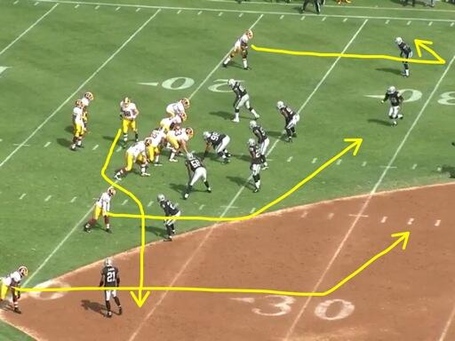 I've been pretty critical of RG3 and his timing with his WRs (especially on 3rd down), but the first 3rd down attempt for the Redskins SHOULD have been complete. Comeback route on the left with double posts on the right. 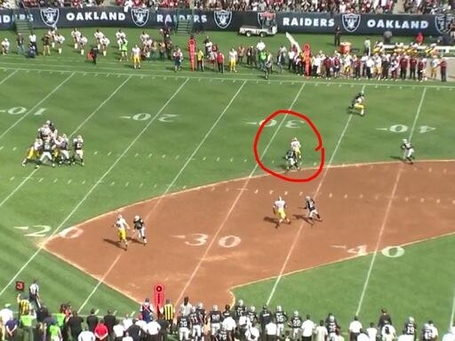 Moss creates separation on the shorter post and RG3 makes the right read. Moss just needs to squeeze this ball. Can't blame RG3 for this one. 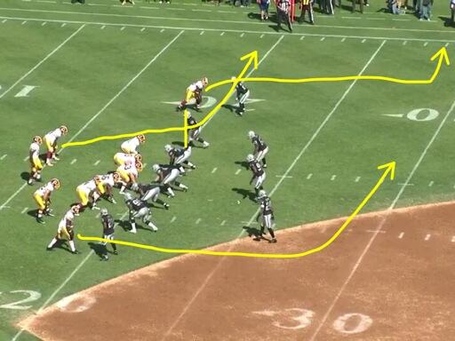 Here's a play where RG3 doesn't panic when his 1st read isn't there. He is looking for Garcon on the deep out, with Hankerson dragging across middle and Paul blocking then heading out to the flat. 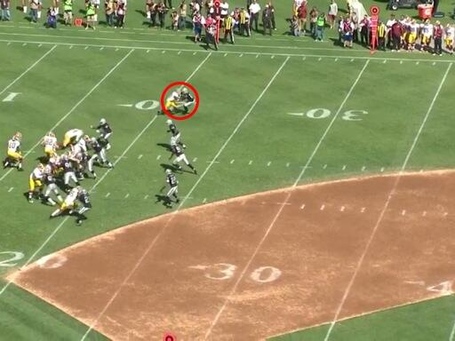 As you can see, Garcon is met with a great jam off the line of scrimmage. (Insider's note: Notice Paul is in the process of cut-blocking a pass rusher. I saw this a few times during game, he would cut a pass rusher, fall to ground, THEN go out into route. Mark Chumura of the Packers used to do it with Brett Favre, after he'd fall down, defenders would leave him alone, he'd get up and be wide open.) 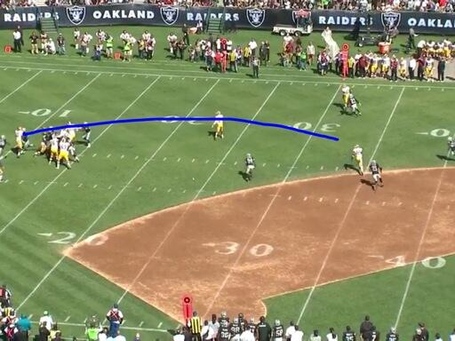 RG3 smoothly moves to 2nd read and hits Hankerson across the middle for a 1st down. Niles Paul is also wide open in the flat. 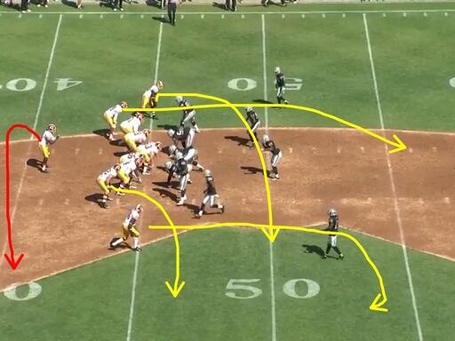 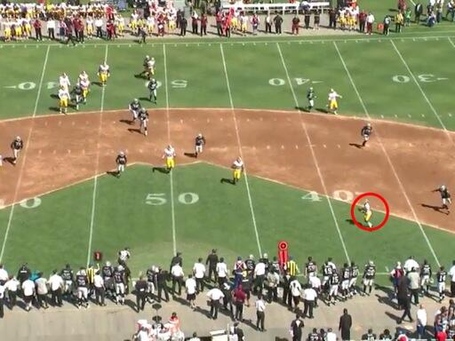 Good to see RG3 on the move and make a nice, decisive throw out to Hankerson for the 1st down. 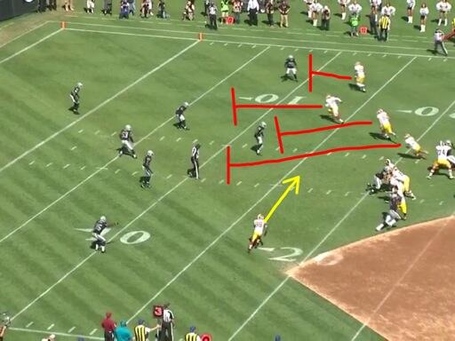 Here's a good play not necessarily for RG3 (even though he gets a completion and yardage) but for Redskins. I saw the Chiefs KILL Eagles with this last Thursday multiple times. It's basically a deep screen pass. This is for 3rd and long when you expect defense to play prevent. You have 4 pass catchers to right go out on deep "routes" while 1 WR runs shallow cross from left. 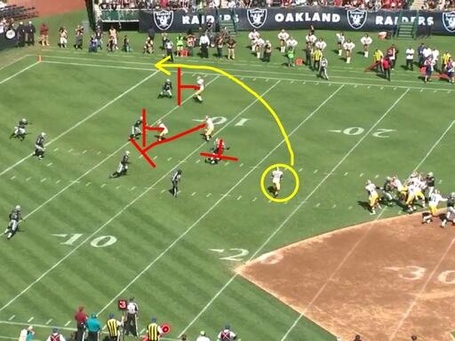 Garcon catches the ball here while the 4 pass catchers attempt to form a wall. Essentially, this is like a Punt return right. Garcon tries to get to sideline behind blockers. 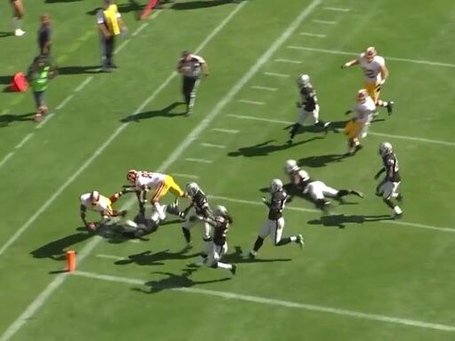 While Garcon didn't score, he came within inches of doing so. For a 3rd & GL play that started at the 20+ yard line this isn't a terrible result. 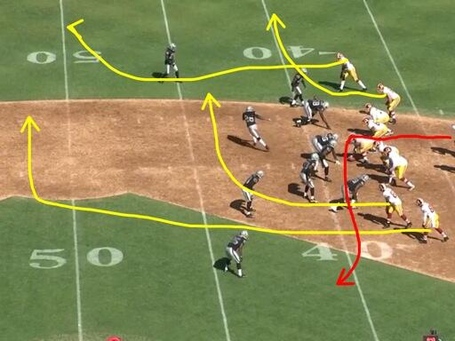 This is a 3rd and 10 play. The Redskins had a flood right with Helu doing a late leak to the left. 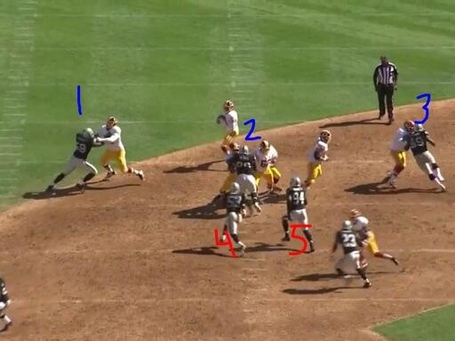 Raiders originally only bring 3 rushers but when Helu sets up to block, the ILBs (4 & 5) come rushing in late. 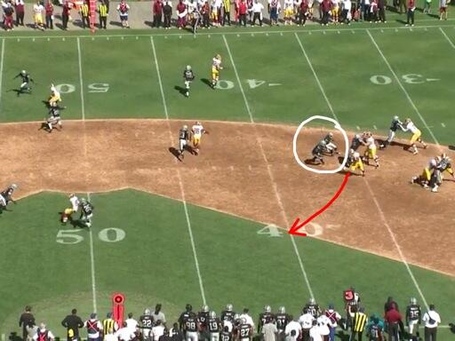 Looks like RG3 was looking for corner route at the top of the screen. When he sees that's covered, he scrambles to find time while ILBs both put on the brakes when Helu releases but neither can match his speed. 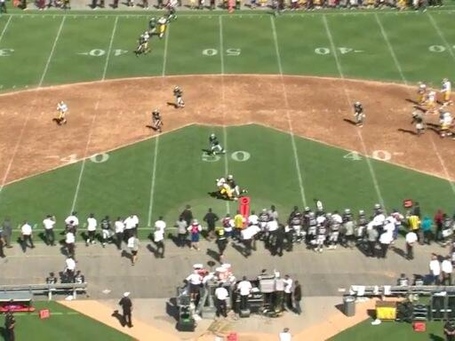 RG3 sees Helu break free and hits him for another 3rd down conversion. 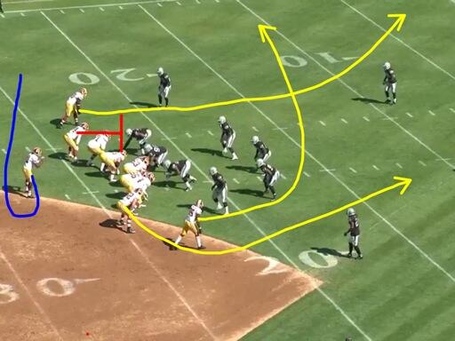 Here's another famous Shanahan bootleg. Play action right, boot left. It's funny because the actual target of the pass is just a blocker on this play. 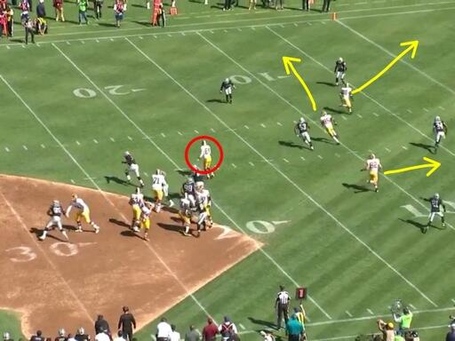 RG3 continues to roll out and as you can see no one is getting open. Niles Paul is just shuffling in the middle of the field as he had lost his block. 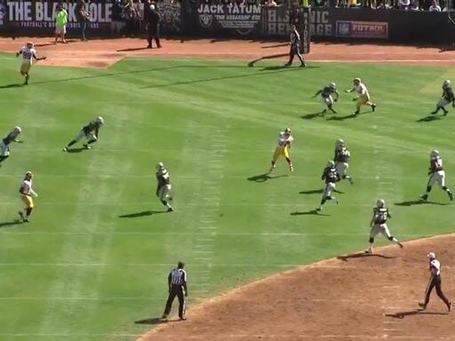 It was a good job finding someone open but it's late and across the middle; two things you don't want to hear about a throw. Looks good here but don't want to see a lot of it. Throwing comebacks before stepping out of bounds looked good too until Lions picked it off. 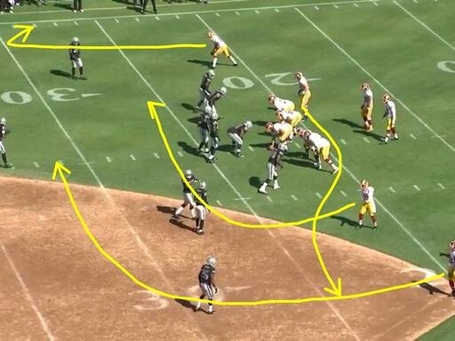 Here's a straight drop back pass. RG3 is looking for Garcon who is running the deep in route. 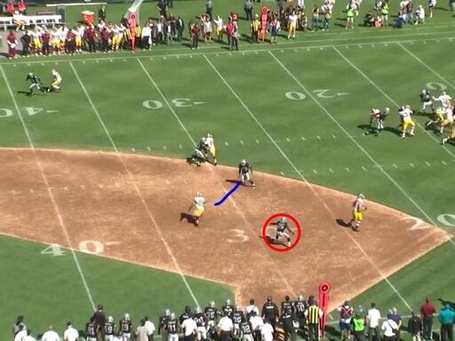 CB passes off Garcon when Paulsen goes to flat. That leaves Garcon to LB who has back turned to line of scrimmage. 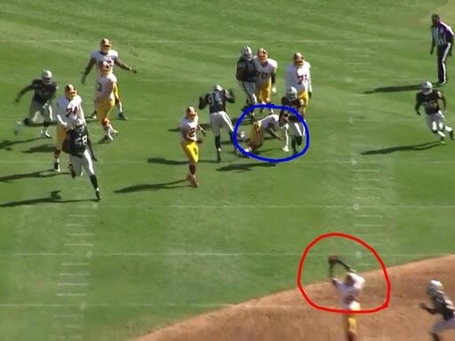 Santana Moss's route nullifies the underneath coverage. RG3 stands strong in the pocket, takes the hit and delivers the ball to Garcon right where it needs to be. That's how it is drawn up. 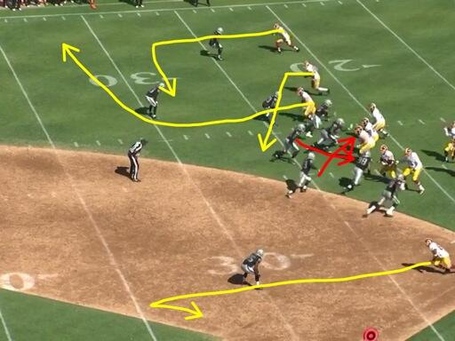 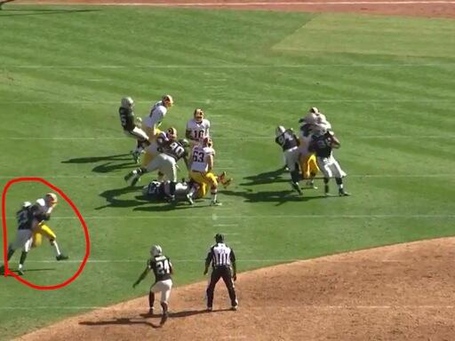 RG3 sees it this time and hits Hankerson quick. Unfortunately, Raiders DB made a 1 on 1 tackle preventing the 1st down but the point is RG3 saw blitz, threw it hot into vacated zone. Something he didn't do earlier.

In conclusion, RG3 has gotten better each week. Are the Raiders the most difficult opponent? Certainly not but a win is a win. We were spoiled last year with RG3's performance and even though he had a great rookie year, we need to come to grips with the fact that it's still just his 2nd year in the league. On top of that, we all know his knee brace is a game changer. Last year, his play-making ability limited what defenses could do. Forced defenses into zone coverage and took players out of coverage to spy. It limited defensive looks made it easy for RG3 to know what he was seeing. This year, the brace has limited that, thus far and has given defenses opportunities to open up playbooks against him. So the slow start could be as simple as: RG3 played all last season ONE way. He can't play the same way this season so he is seeing the field differently. Seeing things he didn't see his rookie year and trying to adjust which is almost like having a new rookie year but not quite. Bottom line, he is still young, with lots to learn. Last year, he won with his legs before arm. This year, he's learning to win with his arm before legs.