An All-22 film breakdown of the Redskins Special Teams against the Cowboys.

Who doesn't like Special Teams breakdowns? (No pun intended.) Here are some things I saw from this past Sunday. 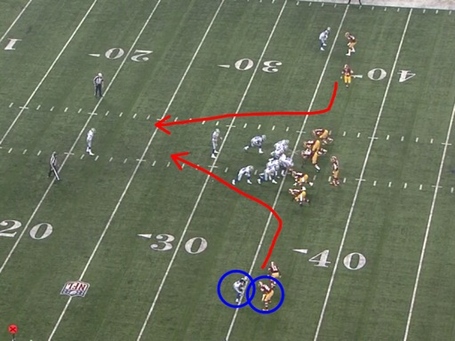 One of the reasons we aren't getting great returns on punts is because of the job we are doing on the gunners. Here, Redskins set up with two guys on each gunner, but send one from each side, leaving gunners one on one on the outside. 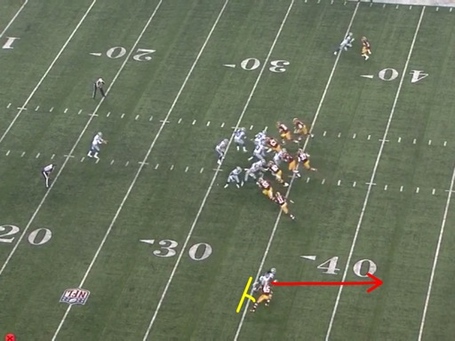 Jerome Murphy (at the bottom) attempts to press the gunner and whiffs bad. 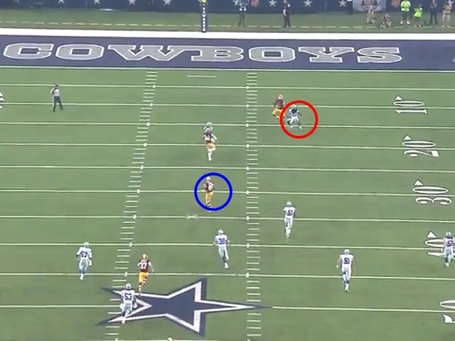 Look who is in Morgan's face. . .the gunner that Murphy was responsible for. Murphy is in the middle of the field. (Editor's Note: I don't know why Morgan doesn't fair catch this.) 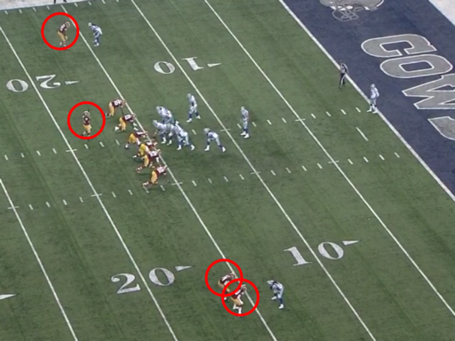 On this play, Redskins have two defenders on gunner at bottom (Niles Paul/EJ Biggers) and Murphy on the gunner up top. He was beat after trying to press his gunner earlier so he plays off and gives up the inside lane. At least, that's what I originally thought. Jose Gumbs is the man circled in red in the middle of the field. Murphy and Gomes are actually playing bracket coverage on that gunner. Murphy takes the outside. Gumbs takes the inside. 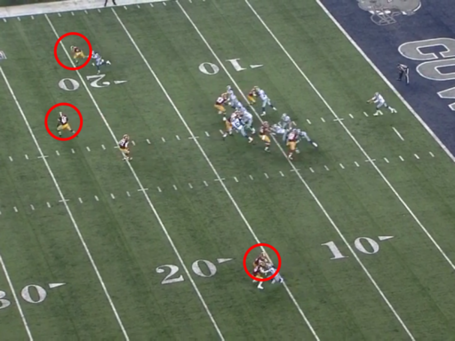 Paul and Biggers have their gunner tied up at the bottom. Murphy takes outside and Gumbs turns and takes inside. 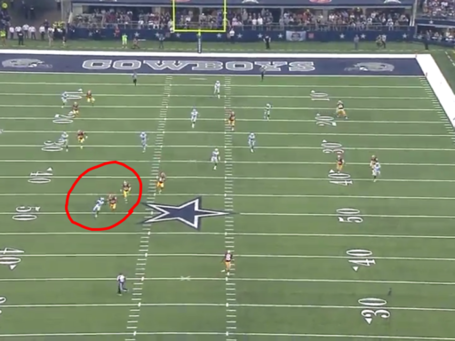 The problem is that he gets by both players without much resistance. (Is this what Niles Paul was talking about when he said some people might not be buying in to some of Keith Burns methods?)

It is at this time, that I'd like to acknowledge the slice of humble pie I ate last night. I was openly critical of Jerome Murphy's play in this game and blamed him for the punt return TD (because of the illegal shift penalty) before I had the All-22 film. I won't do that again.

Here is why I was wrong and the penalty was NOT Jerome Murphy's fault. 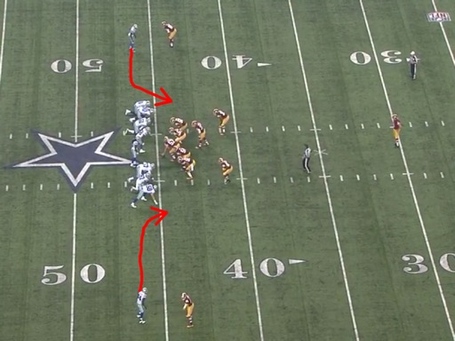 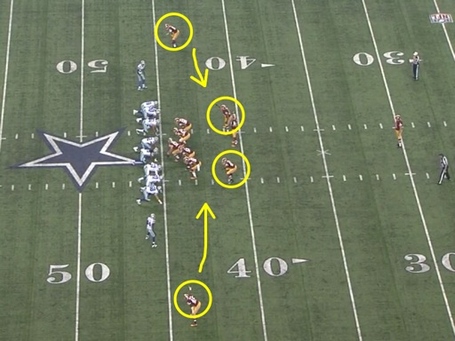 As you can see, both punt protectors AND gunners point out the extra guys in the box. 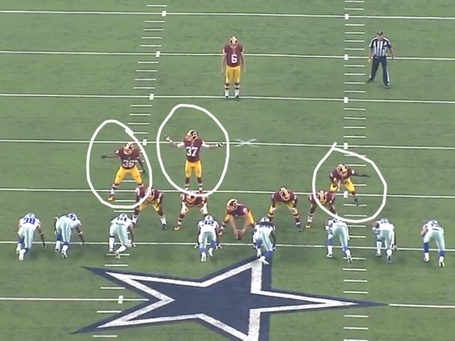 Another view, Darrel Young and Jose Gumbs point it out, Reed Doughty motions for gunners to come in. 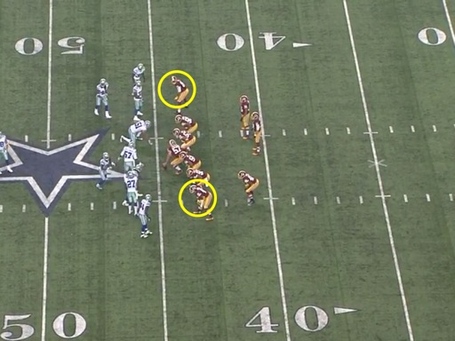 Redskins switch to a max protection and bring both gunners into the box. Executed perfectly. (This is the famous non-fumble play). 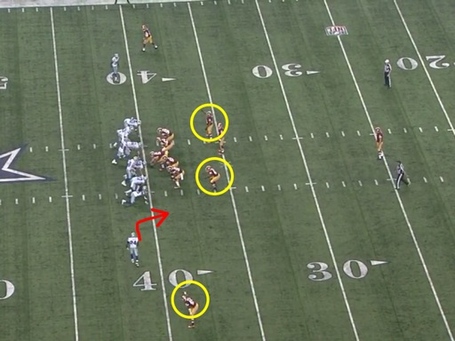 Here is the call for illegal motion. As shown, Dallas is bringing both outside guys in the box again. The punt protectors and Murphy point it out. It would appear that the Redskins would be shifting into max protection again. 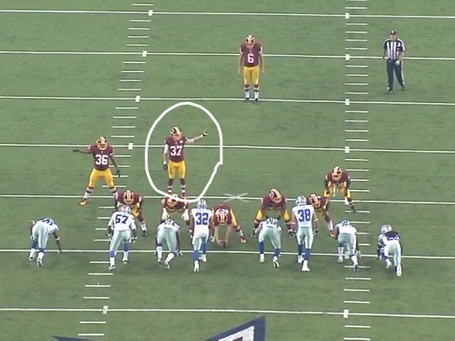 Doughty signals for Murphy to come in and the ball is snapped immediately after this shot. 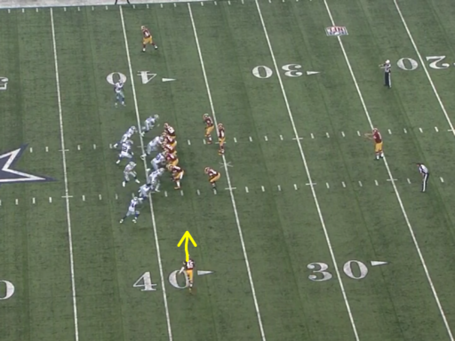 J. Murphy starts shifting in and the ball is snapped now while Murphy is still coming down the line of scrimmage. Illegal shift. So this is actually the fault of Sundberg/Rocca.The next play, of course, was the punt return TD. 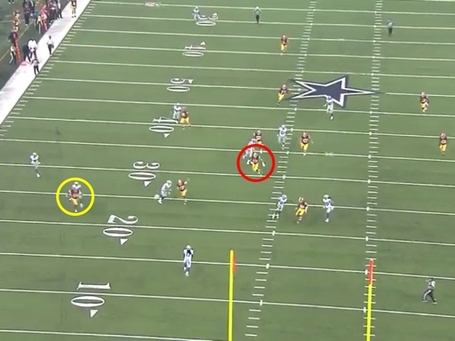 Punt Return TD. On left, N.Paul claims to have been blocked in the back but it didn't look like much. Bryan Kehl is in the middle of the field. 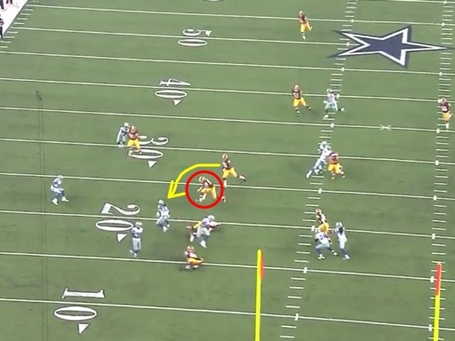 Paul gets a piece of him but not much. Kehl (red circle) tears his ACL here. He is in position though and would have made the tackle had it not been for the injury. Rob Jackson (behind him) takes a lazy angle and that's all Harris needs to score the TD. Rocca could have made a better attempt as well. 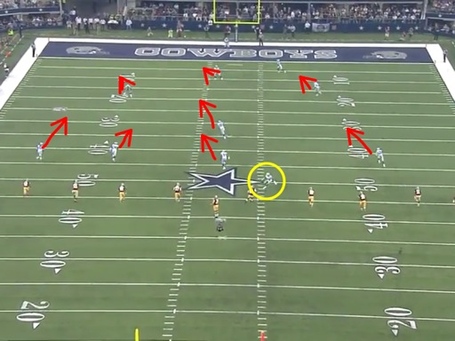 Here's the long kick return. Upon the kick, all Cowboys drop back except one guy who comes up and chips one of the wedge busters. After the chip, he peels back down the field. 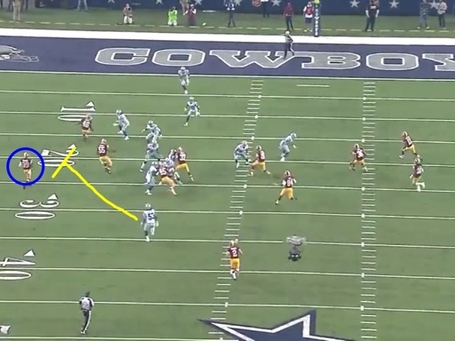 Amerson appears to be jogging here but he is the contain man. His job is not to attack but to force everything back inside. Meanwhile, that LB who chipped the wedge buster has been sprinting from the 50 yard line and is making a bee-line for the contain man. This is a good design because if there is no contain man, you can break it to the outside. 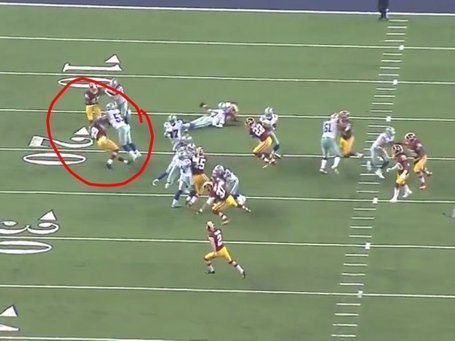 Amerson, of course, never sees it coming. He appears to be knocked unconscious. Maybe I don't understand the rules but I don't see how this wasn't illegal. It looks to be helmet-to-helmet contact. If not that, then do peel back blocks not apply on kickoffs? This guy peeled back 30 yards. 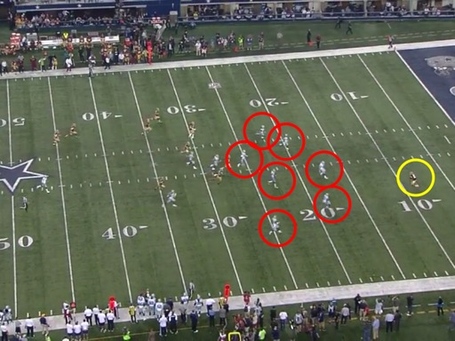 Lastly, here is a punt return towards the end of the game. I'm going to assume that the Redskins special teams expected a fair catch but COME ON! THIS IS RIDICULOUS! Josh Morgan doesn't call for a fair catch and the closest seven, yes, SEVEN players are Cowboys. (This is also with a holding call on Gumbs.) 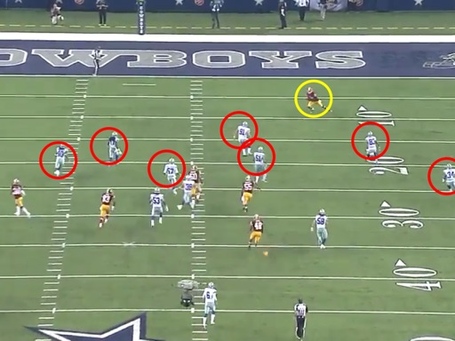