The Cowboys made the switch from their 3-4 to a 4-3 defense during the offseason. We look at the All-22 Coaches Film to break down two of their main defensive fronts.

There was plenty made of the Dallas Cowboys decision to hire Monte Kiffin as their defensive coordinator this past offseason. Kiffin is known for his use of the "Tampa 2" defense and shifted the Cowboys from a 3-4 defense into a 4-3 defense. While there has been a lot of focus on the coverages Dallas has and will be using, I wanted to look at the defensive front now that they have made the transition to the 4-3.

Kiffin has the Cowboys using two main fronts, the "4-3 Over" and "4-3 Under". We'll stick to those two, though there are variations of both. But before we get into any of this is the terminology of gaps and defensive line techniques. 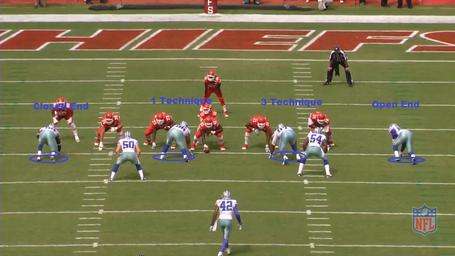 The 4-3 Under effectively under-shifts the defensive front away from the strong side of the offense. The tight end lines up outside the right tackle, making that the strong side of the play for the offense. In the under front, the defensive tackles shift away from the tight end and change their techniques. The nose tackle plays a 1-technique over the playside shoulder of the center, while the under tackle plays a 3-technique on the outside shoulder of the guard.

What this front does is create one on one match ups on the weakside of the offensive line. It's very hard for the offense to double team the under tackle against this front. 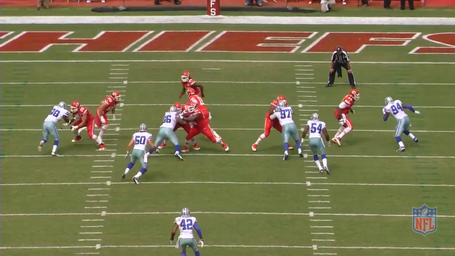 The nose tackle attacks the playside A gap between the center and guard, forcing the double team. Meanwhile, the under tackle focuses on the weakside B gap between the guard and tackle. With the two defensive ends covering the C gaps outside the offensive tackles, the only uncovered gaps are the playside B gap and weakside A gap, which you can see are the big holes in the offensive line in the picture above. Those two gaps will be filled by the two linebackers that you can see in the picture there.

This scheme works particularly well on passing downs. It's very tough for the offensive line to double team the under tackle as well as the nose tackle. Because the nose tackle is attacking the A gap up the middle, he becomes the immediate priority for the offense. That means the under tackle is given a one on one match up against a guard. This was the kind of scheme that the Tampa Bay Buccaneers used to give Warren Sapp good match ups and let him dominate. If run correctly, it effectively makes the under tackle a third defensive end against the pass. 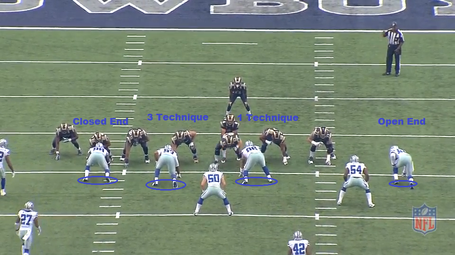 The 4-3 over over-shifts the line towards the strong side. This time the 3-technique under tackle is lined up on the strong side of the line. He's still only attacking one gap, but in the over front the offense has an extra blocker in the tight end to help cope with him. 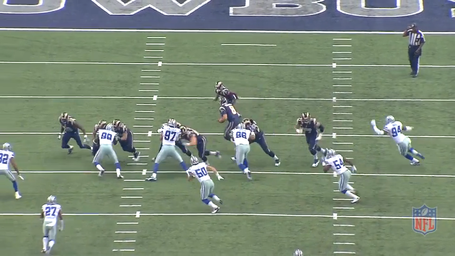 It's still effective against the pass as well, but with an extra blocker to the side of the penetrating under tackle, the offense has a better chance of dealing with his threat.

Those are two of the more common fronts the Redskins offense is likely to see from the Cowboys on Sunday night. The Redskins offensive line hasn't been playing to the same standard it was last year. It will be interesting to see how they handle this front coming out of the bye week.