With Griffin's knee injury dominating headlines, we take a look back at Shanahan's past with John Elway's injuries.

Let me just start off and be crystal clear that I do not have a pitchfork out for Mike Shanahan. It is not known what was said on those sidelines between doctors and coaches, so am I not going to form an opinion based on limited knowledge.

However, I do find it interesting to take a look back at Mike Shanahan and John Elway's relationship in Denver. John Elway endured an amazing career on a totaled knee despite always having a hitch in his walk. There's quite a few interesting tidbits regarding Elway's knee history. From Matt Christopher's book, In the Huddle...with John Elway,

Today, surgical procedures often can repair torn ligaments. But when John hurt his knee [in high school], there was little doctors could do. In 1978, a torn ACL was a career-ending injury for most athletes. But John wasn't like most athletes. For some reason, even without his ACL, his knee remained stable. Although he couldn't play football for the remainder of the season, one month after the operation, John's doctor examined the knee and, stunned, pronounced John fit enough to begin baseball practice. He even gave John the okay to resume his football career in college the following fall. Even without the ACL, John's knee was stronger than most.

In 1985, Elway had microscopic surgery on his knee. The part that stands out here?

Elway, the Broncos second-year quarterback, said it would be his second such surgery. Saccomano said Elway told him he had noticed a "clicking" in his left knee before the game."He thought this might have been floating around since his college days," said Saccomano.

Amazing. In fifteen seasons in the NFL, Elway has missed exactly nine games to injury. That's incredible given his injury history from the start. Surely, Mike Shanahan and John Elway's children share incredible stories of playing through injuries unbeknownst to fans and media.

Obviously, over Mike Shanahan's 37 year coach career, he's faced many players with ACL injuries. He took a chance on Javon Walker by trading a 2nd round pick to the Packers for Walker, who was coming off an ACL injury. With sprains, there's only so much a doctor can say...it's up to the player to reveal their true situation. When Griffin tore his ACL in Baylor, he finished the half and scored three more touchdowns. Surely, this is old news to the Redskins coaching staff.

All that said, NFL players are warriors and want to be out there. Every single Redskins player backed RGIII post-game after the loss to the Seahawks. Elway played through rib injuries, multiple leg injuries, and who knows what else. Shanahan let him play. What would have happened if Elway crumbled untouched on a scramble?

Obviously a big difference with Elway's knee injury is that it was his left knee: his non-planting leg. When Ken and I were sitting at Fedex watching RGIII's pass continually miss the target, we were wondering why he was still in the game. It's one thing to be playing hurt and still effective. It's another issue playing hurt and not moving the ball at all.

Two things that stand out:

Again, there's no pitchfork. If by chance I got paired up with Shanahan or Elway in a 4-some at Rasberry Falls or stumbled into him at the bar in Denver, Colorado, these are questions I would be asking just so I could know for myself. 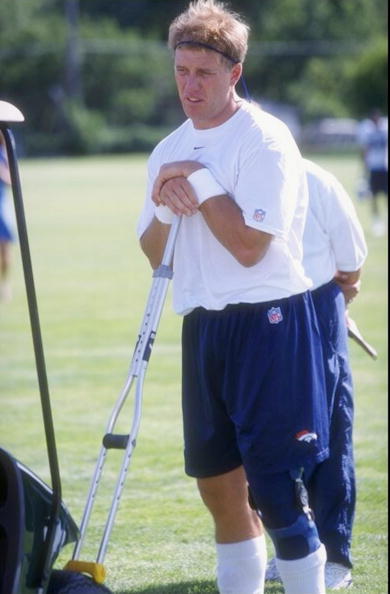