Washington Redskins quarterback Robert Griffin III was mic'd up during Sunday's victory over the Dallas Cowboys. NBC's excellent show 'NFL Turning Point' gave us some amazing insight into the Redskins win, but they also played clips of Griffin calling a couple of plays. Being the football nerd that I am, I immediately copied the play-calls down and starting breaking them down to figure out the play. The first play I'm going to look at came in the third quarter; Griffin knelt down in the huddle and called "Pistol Fly To Trips Right 300 Jet Double Stick". 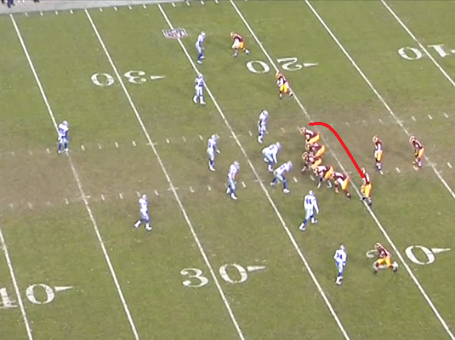 The initial part of the play call is 'Pistol', so Griffin and running back Evan Royster line up in the Pistol formation. The next part 'Fly To Trips Right' calls for tight end Logan Paulsen to motion from the left side of the offensive line to the right. This lands him in the 'Trips Right' formation. 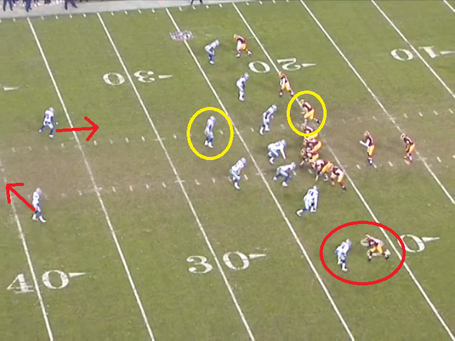 What motioning to this formation does, is give slight signs to what the defense is running. The Cowboys linebacker circled in yellow steps outside, hinting that he is covering Paulsen. The free safety also begins to walk away from the line of scrimmage and towards the middle of the field, indicating that he is the single high, deep safety. That creates a one-on-one match up outside for receiver Pierre Garcon, which the Redskins will attack all day long. 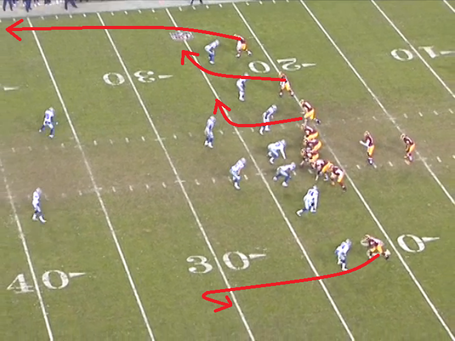 I'll skip the '300 Jet' protection call for now, we'll come back to that in a minute. But for now we'll look at the routes. The combination is called 'Double Stick'. This tells slot receiver Santana Moss and tight end Paulsen to both run 'Stick' routes, which are basically quick out-breaking routes. To go along with this, Joshua Morgan at the top of the picture runs a 'Go' route to further distract the single deep safety away from Garcon. With all the action on the right side of the field, Garcon only has to beat his man on his 'Acute' route (a 10-12 yard comeback route breaking to the outside). 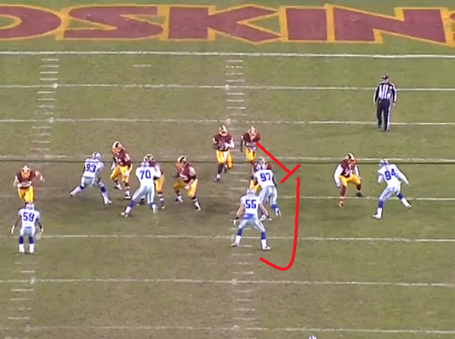 Now back to the protection. The call is '300 Jet'. This is a six man protection scheme that blocks away from the primary receiver, Garcon on the left side of the field. The entire offensive line bar left tackle Trent Williams blocks down to their right. Williams is left on an island with DeMarcus Ware. Royster, as the protection back, has to read the linebackers to check if anyone is blitzing through the gap between the left guard Kory Lichtensteiger and left tackle Trent Williams. As it turns out on this play, the Cowboys only rush four, allowing Royster to release into a route as a check-down option. 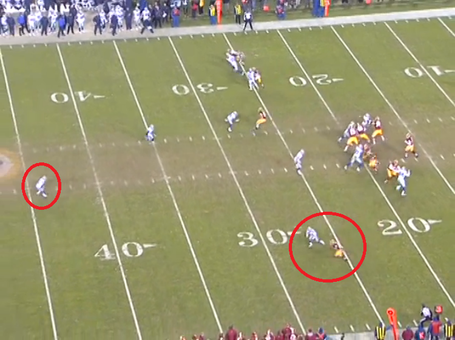 Garcon gets an outside release on his man, giving him leverage for when he breaks outside. The Cowboys free safety continues his drop back to the deep center of the field allowing Garcon to work purely one-on-one. 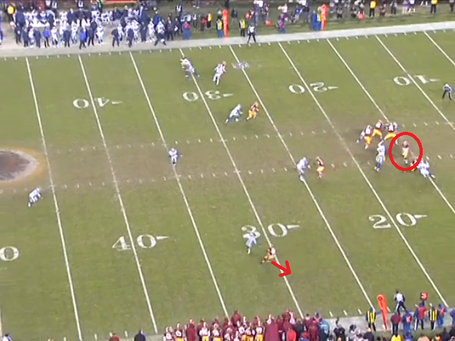 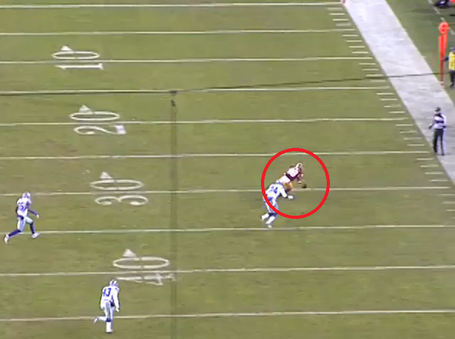 The ball is certainly catchable, but Garcon drops what should have been an easy first down. Its was a beautifully executed play that had everything going for it right up until that point.

So there you have it, 'Pistol Fly To Trips Right 300 Jet Double Stick'. I urge you go and watch the entire NFL Turning Point program. A Friend on Twitter, @HTTR24_7, has links to the entire episode on his website. So give him a follow if you don't already.