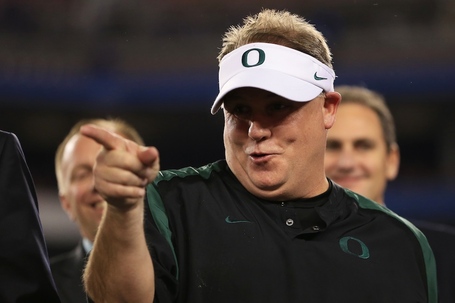 Rumors are swirling where Chip Kelly will end up. He's interviewing with the Eagles, Bills, and Browns and expects to make a final decision by this weekend. So, will his offense work in the NFL?

I was watching NFL Network and Charley Casserly was very adamant that it would not work. Here's his main reasons why, which I paraphrased:

Mike Lombardi chimed in later that he knows Chip Kelly and he will adjust to the NFL game. Either way, bad teams have bad personnel. The Bills, Eagles, and Browns all have horrid QBs and this is a pretty poor draft. What do I know though? I thought the Redskins had a 0% chance of winning more than 7 games.

That picture above sure does Spurrier written all over it though.