If Mike Shanahan were to get a QB tattoo like Rex Ryan, this is how I envision it.

So, it came out today that Rex Ryan has a tattoo of his wife wearing a Mark Sanchez jersey. That's pretty awful...spectacularly awful. I really hope Rex is playing a joke on tabloids by getting a fake tattoo just to spur up how ridiculous it is grown men hide in bushes all day for a living with cameras.

It came out this season that Mike Shanahan is quite the adventurous one. As we learned from Sally Jenkins:

He has a daredevil streak: In the offseason he likes to go to the Caribbean to bungee-jump and parasail. Once, he dove off a 60-foot cliff into the ocean. He also makes annual trips to Vegas for high-stakes poker.

One thing certainly stands out this season to me. Nearly 99% of the national media went ballistic when Shanahan drafted two Quarterbacks. I thought it was fantastic getting a quality talent in the 4th round, especially if it meant ending Grossman's career and adding trade value. But no. The talking heads disagreed...sternly.

If Shanahan were to get a tattoo of his QBs, I envision it being a hybrid Cousins and RGIII tattoo giving the middle finger to the media. That was tough to do, but this will do:

(I know...Shanahan at the beach would certainly call for him being lobster red, but alas. Not pictured are the blacked out tattoos of Pat Bowlen and Al Davis). 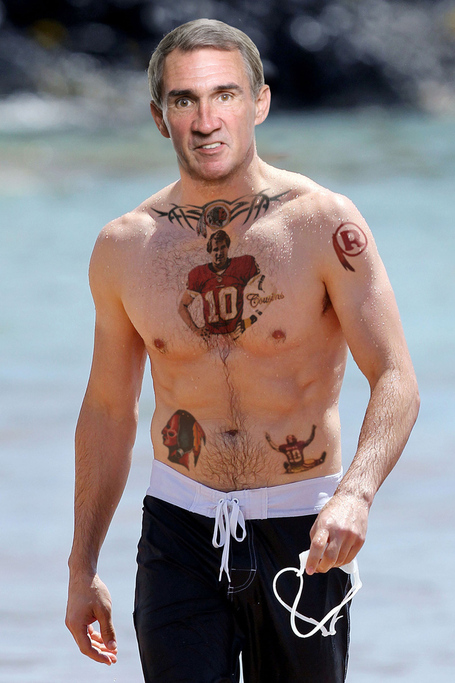