Just Another Reason Why The Read-Option Is Here To Stay

There have been plenty of people who doubt the longevity of the read-option on the NFL, but the play-action bootleg game might ultimately be the reason it's here to stay.

Share All sharing options for: Just Another Reason Why The Read-Option Is Here To Stay

One of the most popular discussions among NFL fans right now is the longevity of the read-option run game. With the success the Redskins and Seahawks have had running it this year, along with the 49ers Super Bowl run, it certainly looks effective. Rich Campbell of the Washington Times wrote a good piece on this a couple of days ago. I thought I'd add one of many points to be made in favor of the read-option staying power in the NFL.

But away from all of that, I want to look at a different concept of plays that has been a staple of the Mike Shanahan offense for decades; naked bootlegs plays off the outside zone stretch play. It works off of a similar principle to use the quarterback's mobility to "block" the backside defender without having to use an offensive lineman on him. 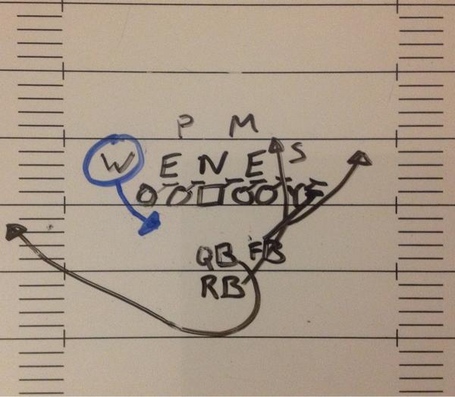 This is a typical Mike Shanahan play. The play is built from his classic '18 Strong' run, but instead of handing it off, the quarterback keeps it and rolls outside the pocket. The backside defender is unblocked and usually caught over-pursuing the run as the quarterback keeps it himself. Sound familiar? It should, its the basis of the read-option play, but on this play the quarterback isn't reading the backside defender to decide if he should hand it off. On this play it is already predetermined that he is faking the hand off and rolling out without any protection on the backside. Now this will be frequently used as a play-action pass to catch a defense off guard and connect on a deep shot, but the quarterback always has the option to run himself if the defense has the receivers covered.

If the play is successful, the backside defender is usually hesitant in pursuit of the run the next time he faces it in case the quarterback keeps it again. The offense is then able to use the quarterback's running threat to "block" the backside defender, freeing up an offensive lineman to help block the play-side of the run. Coincidentally, this is the exact objective of the read-option.

So how about the Redskins favorite read-option play, 14-15 Wanda Tiger Sift, how long can that last? Again, Mike Shanahan has run plays with very similar concepts and processes for years. 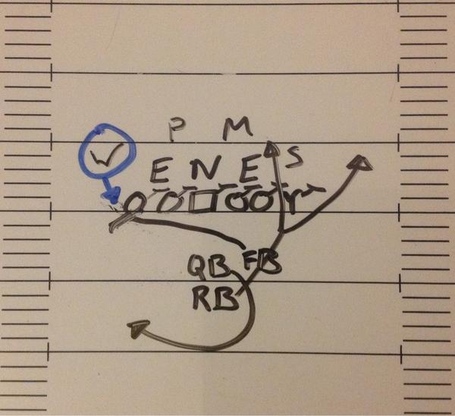 Here is another variation of that '18 Strong' stretch play. The run goes to the strong side of the play, the right side. The left tackle ignores the backside defender as the fullback is assigned with cutting him off from the play. If you've ever watched a Mike Shanahan team, you've seen this kind of play before. Once the defense starts playing heavily on the run, the play-action fake is called. 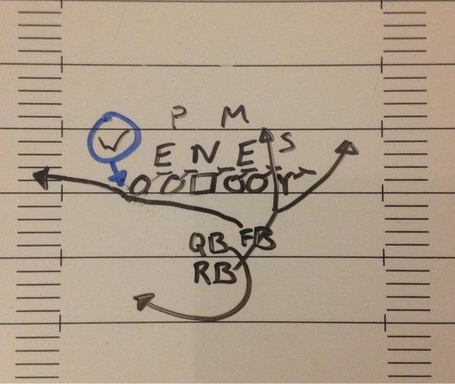 As the quarterback rolls out on a naked bootleg, the fullback also ignores the backside defender and runs into the flat, leaving that backside defender unblocked. The quarterback can either dump it off to the fullback or run it himself. Again, this is nothing new and is something that Mike Shanahan has been doing for years. This play isn't all that far off of the Redskins favorite option play. 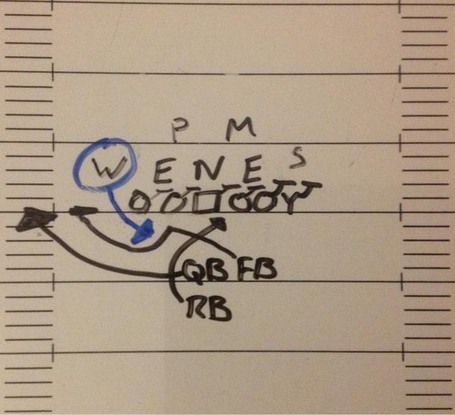 I can't emphasis enough that the object of the option is to "block" the backside defender with the quarterback and free up and extra offensive lineman to the play-side of the run. But it's not something that is totally new, Mike Shanahan has been using his naked bootleg plays with the same effect on the run game for decades. Nobody questions the longevity of using naked bootlegs, and yet, the read-option uses a lot of the same principles and processes. In fact, the read-option offers a higher success rate because the quarterback can make the decision during the play. So to me, the read-option is absolutely here to stay.