While the focus of Redskins fans may have been on the loss of Brian Orakpo, defensive end Adam Carriker was also lost for the season recently. His replacement, Jarvis Jenkins, had a good game in his absence. But he has plenty to work on.

Share All sharing options for: All-22 Film Breakdown: Jarvis Jenkins vs Cincinnati Bengals

Redskins second year defensive end Jarvis Jenkins was weighted with high expectations on his shoulders as a rookie last year. He was blowing up plays in training camp (although considering it's our offensive line he was against, that shouldn't really surprise anyone), and looked as though he was on his way to winning the starting job over former first round pick of the St. Louis Rams, Adam Carriker. But Jenkins tore his ACL in the third preseason game against the Baltimore Ravens.

A year later, Jenkins is the one healthy. While the spotlight was on star linebacker Brian Orakpo, starting defensive end was also sidelined for the year after tearing his right quad. With that injury, the door has been opened for Jenkins to take the starting spot he so nearly won in his rookie season. In week three against the Bengals, Jenkins got his first taste of starting an NFL game.

What was immediately evident, was Jenkins ability against the run. Here's the first play of the Bengals second drive, starting backed up at their own goalline. 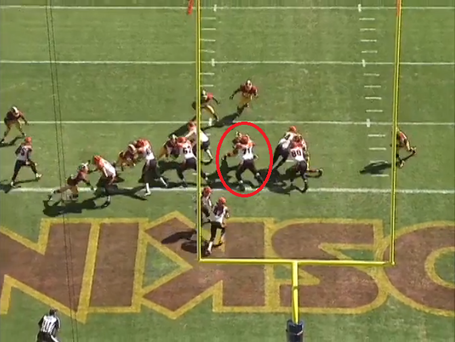 Jenkins does a good job getting his pad level lower than the offensive guard. He uses this leverage to hold the position as he keeps his eyes on the runner in the backfield. 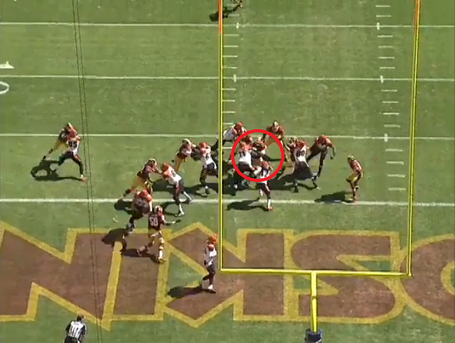 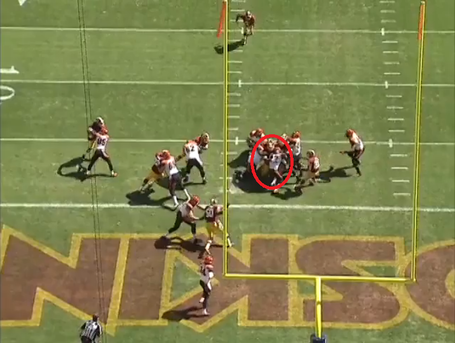 Jenkins is the first defender to make contact with the runner. He stops him in his tracks, and the Bengals gain very little on the play. It was this play that lead to Rob Jackson's interception on the next play. You can read more about Jackson's performance here.

While that play showed Jenkins patience and ability to hold his assignment, he also demonstrated that he could explode into the backfield and make plays there. 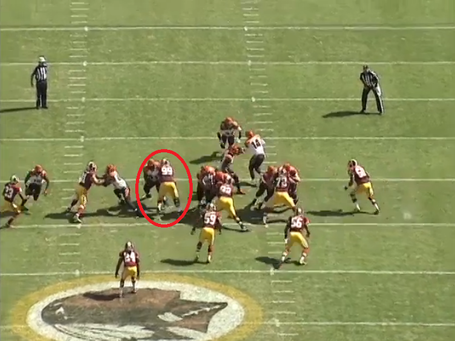 Jenkins gets a good initial punch of the guard and explodes inside to win the position. 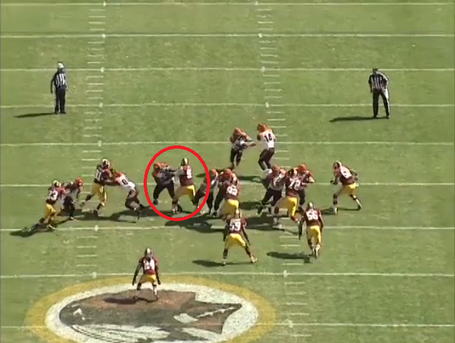 He's able to shred the block without much trouble, all while keeping his eyes in the backfield. 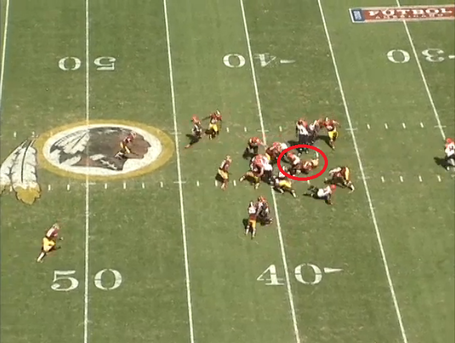 Jenkins makes a diving effort after separating from his block. He manages to catch on to the leg of the runner and is helped in bringing him down for no gain.

Jenkins was occasionally moved inside to nose tackle on some snaps to give Barry Cofield a play or two off. He displayed potential to play the position effectively when needed. 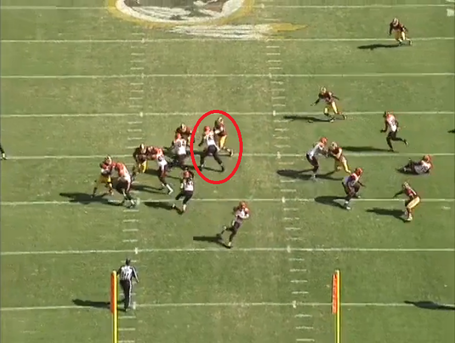 Here Jenkins allows the blocker to move him back slightly. But Jenkins is keeping him at arms length and has his eyes on the runner. 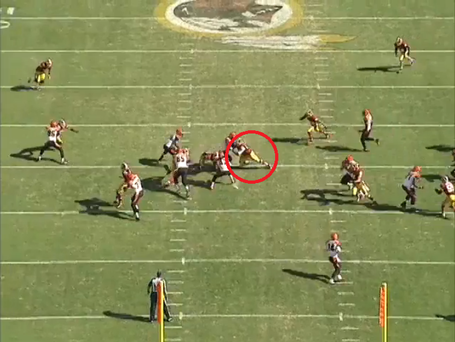 As soon as the running back appears in the area, Jenkins sheds the block and attacks the ball carrier. His position is also spot on. With another defender plugging the hole, Jenkins cuts off any potential cut-back lane for the runner.

It was actually from the nose tackle position that Jenkins was most effective in rushing the passer. 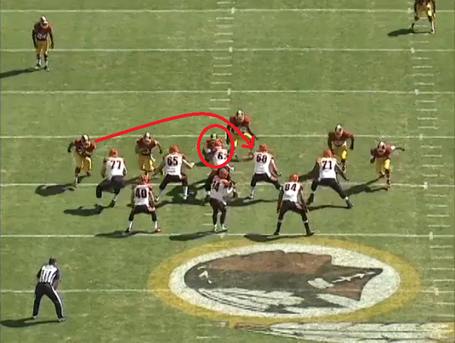 Here the Redskins run a stunt. Jenkins crashes to the center's left, creating a hole for the stunt defender to attack. 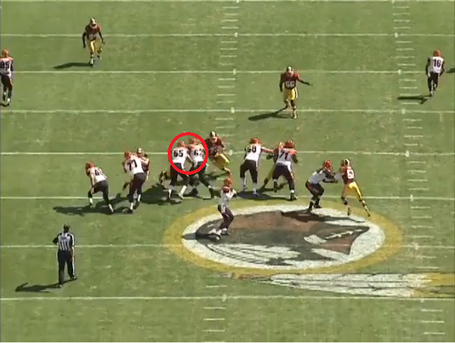 Jenkins gets a strong initial push on the center, forcing the attention of the left guard to move over and help out. Crucially to the play, it gives Ryan Kerrigan a one on one match up on the left tackle, and opens up a gap between the left tackle and left guard. 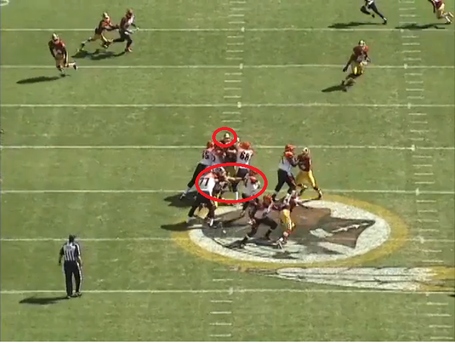 The left guard and center double team manages to push Jenkins back, but the damage has already been done. Kerrigan was too good for the left tackle to handle on his own, but the left guard couldn't help because he was already occupied. The sack was credited to Kerrigan and Chris Wilson, but Jenkins had a big role to play.

Unfortunately that was about the only play that Jenkins was effective when rushing the passer. When moved back to his normal position of defensive end, Jenkins failed to get much penetration, even when he was blocked one on one. 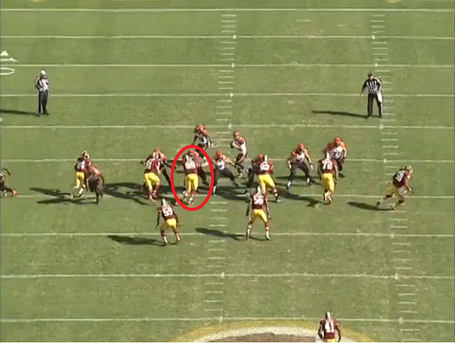 On this play, Jenkins appears to be reaching for his blocker, rather than striding into him. It draws questions of exactly how much he trusts his knee after suffering that big ACL tear last year. 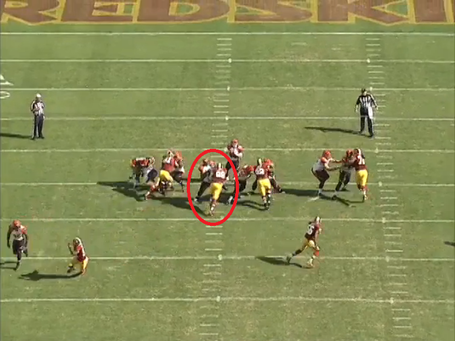 Jenkins attempts to force his way inside, but the guard is easily able to adjust and slide across. 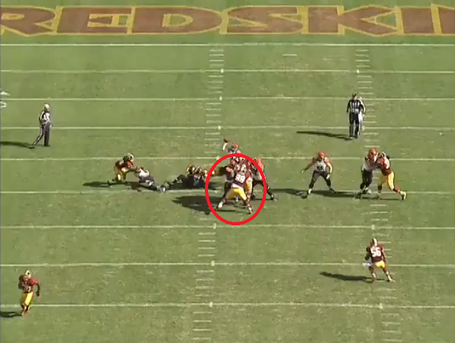 He gets held up at around the original line of scrimmage, and his threat has effectively been negated as the ball is about to be thrown.

It was a solid start for Jenkins. Clearly he has a good foundation to build from, but there is still a lot of work to be done. I get the feeling that he is still thinking about the knee when rushing the passer, which negatively impacts his rushing ability. Once he fully trusts his knee and stops thinking about it, I think we'll see his abilities in the run game translate to his pass rushing efforts.