The Washington Redskins lost their star pass rusher Brian Orakpo for the season due to injury. Linebacker Rob Jackson was one of the men given the task of replacing him against the Cincinnati Bengals. Here's how he fared in his first NFL start.

Share All sharing options for: All-22 Film Breakdown: Rob Jackson vs Cincinnati Bengals

When the winds of trade started blowing way back in February, many Redskins fans were willing to part with linebacker Brian Orakpo in order to get Robert Griffin III. The belief was that Orakpo was too one-dimensional and unwilling to learn new pass rushing moves, meaning he was replaceable. With the two-time pro-bowl linebacker now on injured reserve, Redskins fans got the chance to see how his potential replacements played in his absence. Rob Jackson started, and while in a rotation with Chris Wilson and Markus White, received the highest number of snaps. Here's my thoughts on his performance.

Obviously things started well for Jackson. He managed to get a big interception in the end zone that put the Redskins all square at seven a piece. 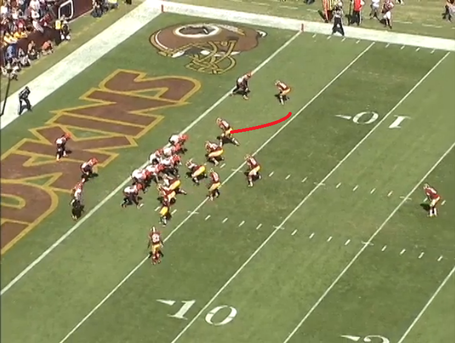 After the game, Jackson explained how he was assigned with dropping back to cover a curl route, or attacking any routes in the flat. 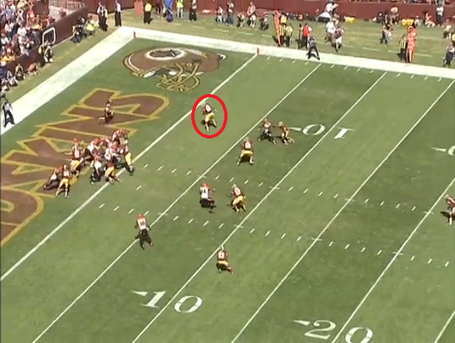 He quickly recognizes the running back in the flat. Dalton is forced to throw earlier than he would like thanks to pressure from Ryan Kerrigan. Jackson is quick to break on the ball, 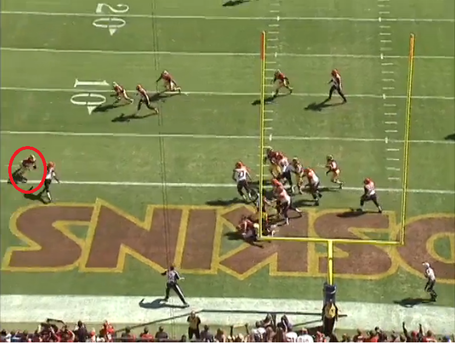 You can see that the tailback isn't even expecting the ball at that point. His head is still facing the pocket as the ball reaches Jackson. Jackson was solid in coverage all game long, and the fact he made this catch shows some ball skills that Brian Orakpo has lacked.

Another big positive for Jackson was his ability to support the run defense. Orakpo is a bit of a roller-coaster in run support, he has his ups, but has plenty of downs to go with it. Jackson displayed his ability to set an edge and force the play back inside. 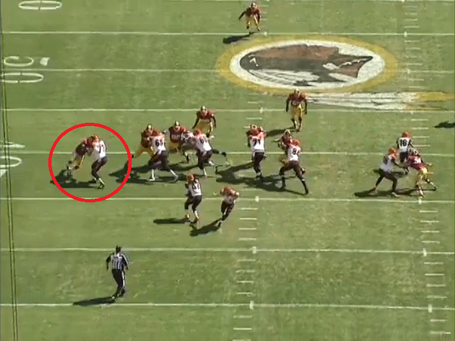 As the back receives the hand-off on this play Jackson attacks the tackle. He gets his pad level lower than the tackle, and has good hand placement to help him win leverage. 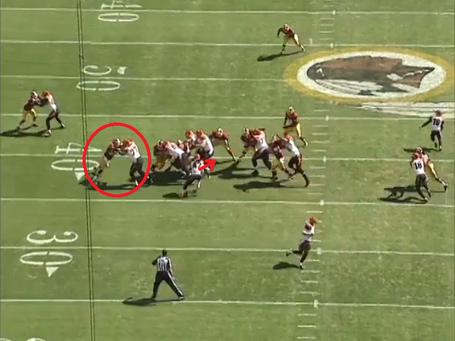 Jackson positions himself to the outside should of the tackle to show the back he has the edge. The back is forced to run back inside where he is met by multiple Redskins defenders. 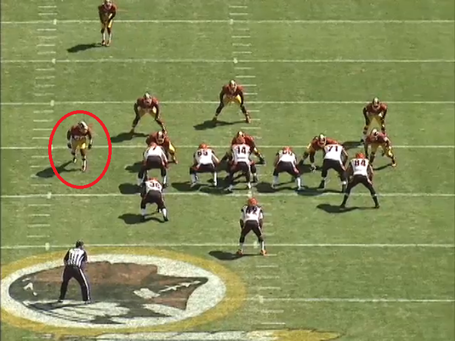 On this play, the tight end on the right of the formation, number 84, is going to run across the line and try to cut block Jackson. 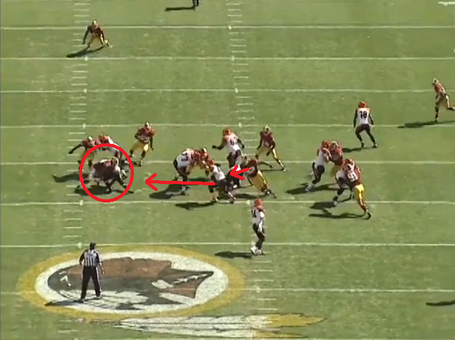 Jackson managed to stay low and absorb the cut block attempt. Nose tackle Barry Cofield sheds a block attempt and forces the running back to Jackson's side. 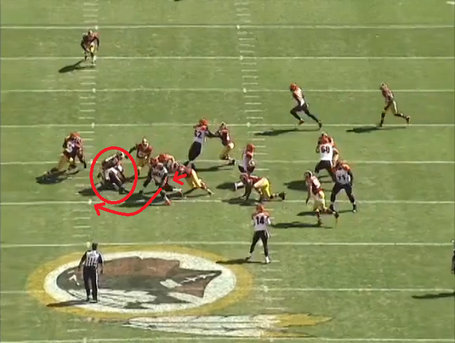 Jackson manages to maintain balance after the block attempt. Defensive end Stephen Bowen's presence forces the back further outside towards Jackson. 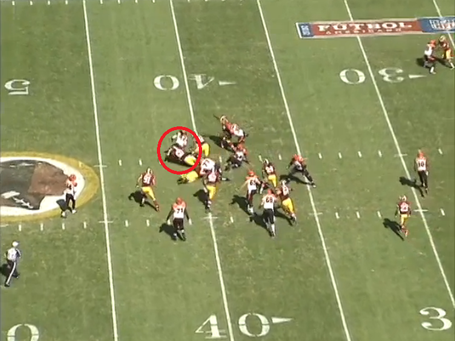 Jackson manages to wrap up the legs of the back, who is eventually brought down without getting back to the line of scrimmage.

Jackson's ability to set an edge and make plays from it were vital for the early success against the Bengals run game. The Bengals tried to run outside, but Jackson forced them to cut back into the likes of Bowen, Cofield and London Fletcher, the Redskins best run defenders.

But Jackson also proved he can make big plays just on his own in the run game. 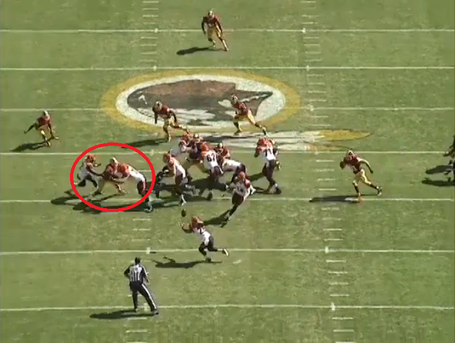 On this play, the Bengals pitch the ball on an intended outside run to Jackson's side. Jackson recognizes the play extremely early and explodes off the line of scrimmage. The tackle can't contain him, forcing a receiver to come across to try and help. 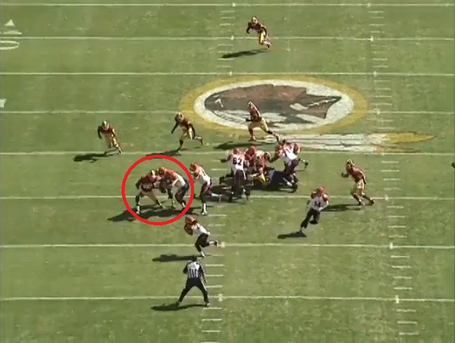 But their efforts are useless as Jackson breaks through, with eyes set on the running back. 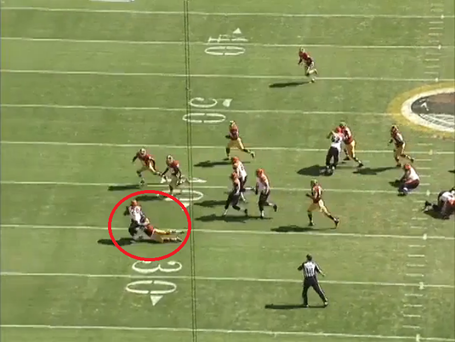 The back attempts to use his speed to run around Jackson, but he fails. Jackson wraps up fantastically and brings him down for a big tackle for loss. I can't recall Orakpo ever playing the run this well.

I think it's fair to say Jackson is a better in coverage and a better run defender than Orakpo. But Jackson fell drastically short of Orakpo's standard when rushing the passer. 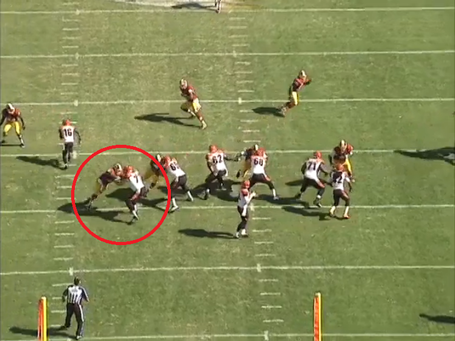 On this play, Jackson's hands are horribly placed. Both hands are closer to the shoulders of the tackle than the chest. This allows the tackle to get his hands on Jackson's chest and control the block. 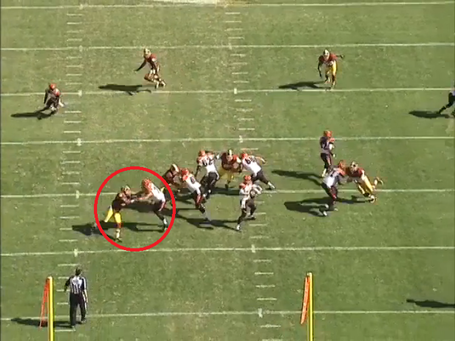 The tackle is able to keep Jackson in front of him at all times and keep Dalton's blindside clean.

One encouraging thing from Jackson's pass rushing attempts was that he was willing to try other moves. Unfortunately, it rarely worked for him. 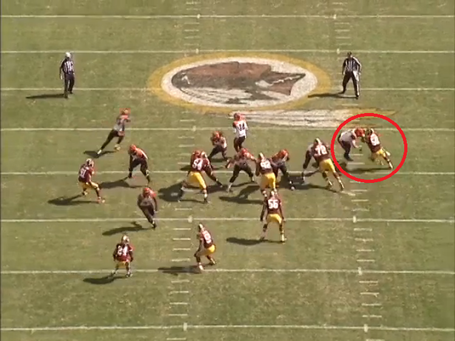 Here Jackson gets the look he wants as he uses a spin move. The tackle over-strides outside, leaving the gap inside for the spin move to work. 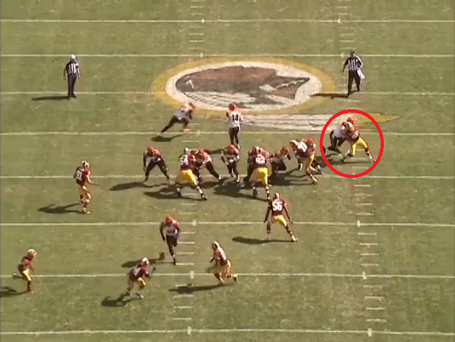 But Jackson's spin move is too slow, allowing the tackle a chance to recover. You have to be quick with a spin move, otherwise you show your back to the tackle, making it easy for him to push you over or off balance. 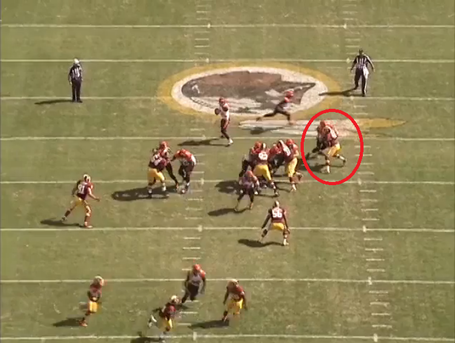 Coming out of the spin move, the tackle has the positioning and all the leverage to completely negate Jackson from the play. Andy Dalton has all the time in the world to complete a pass, which he does.

Then we move late into the fourth quarter. The Redskins need to get some pressure on Dalton and get the offense back on the field. 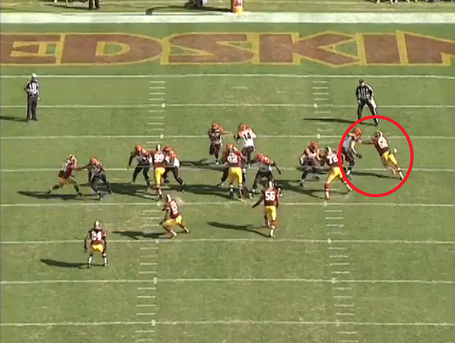 Jackson takes five steps before he engages contact with the tackle, as you see in the picture above. Five steps is two too many. He takes too long, allowing the tackle to get into position before contact is even initiated. 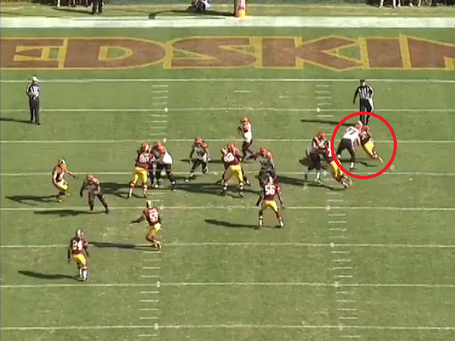 Jackson attempts to speed rush outside to get past the tackle. But because he was too slow to get to the edge, the tackle is able to run him past Dalton. 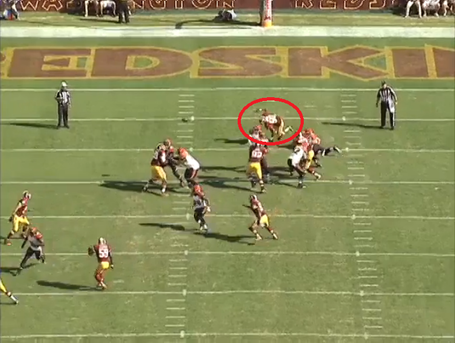 By the time the ball is out, Jackson is well clear of Dalton in the backfield.

This was clearly a concern for the Redskins coaching staff as well. They subbed in Markus White or Chris WIlson in obvious passing situations as they offered more of a threat than Jackson. So while Jackson might have a couple more dimensions than Orakpo, he's still miles off in terms of a pass rushing threat.