5 Questions with Cincy Jungle on Redskins vs Bengals Matchups

Share All sharing options for: 5 Questions with Cincy Jungle on Redskins vs Bengals Matchups 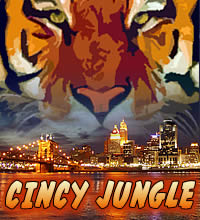 Here's our weekly Q&A with the opponent, up this week is Josh Kirkendall from Cincy Jungle.

1.) Many of us have not watched any Cincy games this year, what has been the main problem(s) why the Bengals' defense has been getting shredded the last 2 weeks?

Most of it has to do with an overall lack of a pass rush. Despite generating five combined sacks in the first two games, the plays where Cincinnati's defense isn't dropping the quarterback, the passer is comfortable in the pocket to calmly read his progressions.

But most of the problem has been missed tackles, resulting in receivers picking up chunks of yards after the catch.

Bonus: It looks like the Bengals haven't played a regular season game vs a mobile QB since 2010. That problematic?

Not sure how much one can take from a preseason game, but this year Tim Tebow and Aaron Rodgers shredded Cincinnati's defense with their legs. T.J. Yates and Colt McCoy, not completely known as sprinters, displayed their general elusive tendencies last year, especially on third and long situations. So there's concern how Cincinnati's defense will address the Robert Griffin III run-factor.

2.) Obviously getting DE Carlos Dunlap back is a big deal, is there any reason to think the bleeding will stop on defense? Mike Shanahan loves exploiting mismatches...who are the weak links on your team. Redskins have solid WRs and a TE.

The strong safety on this team is a major concern in coverage. Taylor Mays started there in week one, but was immediately replaced by the following weekend with Jeromy Miles, historically a special teams player. He showed promise during the preseason but was part of some of the bigger plays allowed by the Cleveland Browns last weekend.

Additionally the team's linebackers are not strong cover-guys; mostly downhill run stoppers - but even that has been seriously questionable this year, often failing to recognize and aggressively attack rushing lanes, enabling blockers to dig into them.

3.) AJ Green and Hawkins worry me significantly. How are their numbers versus mediocre CBs?

It's not so much the play of the opposing cornerbacks that they're facing that dramatically affects their production; rather the defensive scheme that's be utilized and how it affects routes. For instance against the Cleveland Browns, the defense gave Green considerable attention and literally shut down his deep route. He then essentially became a distraction for Cleveland, allowing other routes to develop for the remaining wide receiver roster. As a result four receivers posted over 50 yards receiving with great ball distribution from Andy Dalton.

Hawkins on the other hand has a propensity to make big things happen. He's arguably one of the best receivers on the team when given space. He's somewhat like the appearance of a fastball. You have so little time to make a decision, but when it's too late, you realize its slider and there's nothing you can do about it. That's Hawkins in a nutshell because at full speed, he can stop or change directions just as quick. That being said he's ordinary when covered well.

4.) The Redskins defense is on Defcon 4 right now with the poor safety play and the loss of Carriker/Orakpo. If Skins don't get a pass rush, this game is over. How has the Bengals OLine looked this year and are there any weak links there?

Right now there's a rookie (Kevin Zeitler), second-year player (Clint Boling) and a free agent (Jeff Faine) signed a week before the regular season starting at the guards and center respectively. All things considered they've played well, despite giving up a league-high 10 quarterback sacks - though a majority have been coverage sacks and in some cases, Dalton having only one progression on a three-step drop, which doesn't require sustained pass blocks.

At the same time there's a question mark right now. They dominated Baltimore's front seven running the football, but then took a step back last weekend. But are they by any means bad? Absolutely not. There are three new starters right now and given time to cohesively develop, they have all of the potential in the world.

5.) What's your prediction for the game and the stat lines for RGIII and Dalton? (yards,TDs, INTs)

I'm not very bipartisan, so I'm calling for a Bengals 31-27 win with the Redskins driving at the end, but running out of time.

Nice call by Parks in the podcast....everyone always says "31" or "28" as the score in predictions.