Redskins Are Opening Up Their Playbook With Robert Griffin III

Share All sharing options for: Redskins Are Opening Up Their Playbook With Robert Griffin III

Well, the Redskins plan worked. They showed absolutely nothing in preseason and saved it all for the Saints yesterday. We saw a lot of new plays, one of which was used for the majority of the opening drive. It looked like the Redskins were just throwing a bunch of bubble screens to the receiver in the flat, but Coach Mike Shanahan and quarterback Robert Griffin III stated that they weren't strictly screens. So what were they? Here's what it looks like to me. 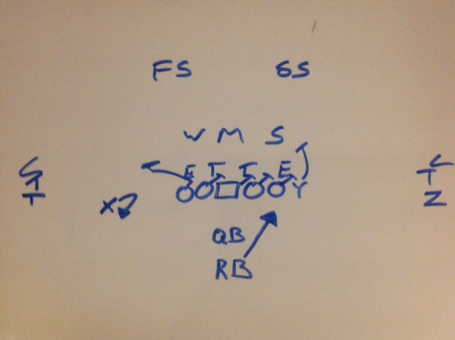 First off, personnel. In the huddle, it appears to be a 'Tiger' formation, with two tight ends, two receivers and one back. But then they split the 'T' man (the second tight end) to the far left, with the 'X' receiver in the slot. So in Redskins terms, Niles Paul lines up outside with Pierre Garcon in the slot.

The quarterback reads the set up of the defense and has the option of handing it off for a standard run; or faking the hand-off and throwing the receiver screen. In the opening drive yesterday, the Saints saw the tiger formation come onto the field, and stayed in their base personnel, rather than bringing in an extra corner (not knowing that Paul is going to line up outside). The Saints allowed the corner to line up over Paul on the outside instead of a linebacker or safety who would typically cover a tight end.

That fact, along with the fact nobody lined up across from Garcon, told Griffin III that the Saints were in a zone coverage, rather than a man coverage. So Griffin faked the hand off and threw the screen to Garcon. Left tackle Trent Williams fakes running with the line before rolling out to help block, while the rest of the offensive line carries on, not knowing if the running back has got the ball or not.

The Saints failed to adjust to that play on the opening drive. But should they have brought in an extra corner to cover Garcon in the slot, or just used a linebacker out on Paul and played man coverage, then it would have been a run. The defense would lose a man from the front seven to help cover the extra receiver in the slot, meaning the Redskins would have had six blockers on six defenders. In theory, that leaves no spare defender to tackle the running back, exactly what the option run game is designed to do. But this way avoids Griffin having to run the ball.

How's that for adjusting the offense, Mr. Donovan McNabb?