There was plenty to discuss after yesterdays preseason week three match up against the Colts, some of which Shoup covered yesterday. But there was one play in particular that I thought was a fantastic call. You've probably already guessed from the title, that play was Robert Griffin III's touchdown pass to Santana Moss. Lets draw it up on the whiteboard. 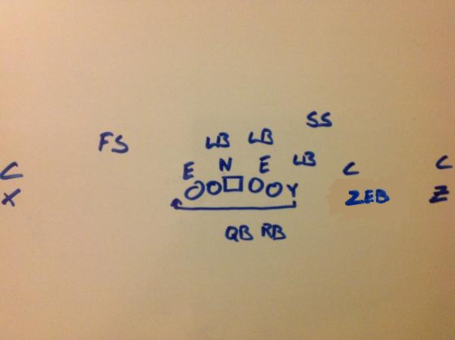 The formation looked to me like Zebra Trips Right Y Left. The 'Y Left' part of that signals the 'Y' (the tight end) to motion left before the snap. The Redskins use this to occupy the free safety on the backside of the play. 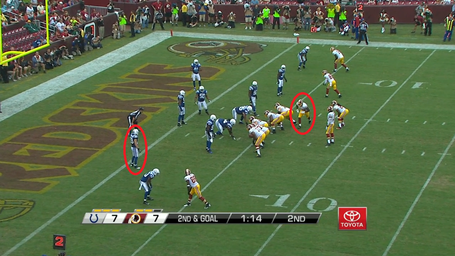 With Fred Davis in motion to the backside of the play, the Redskins get the look they want on the front side. 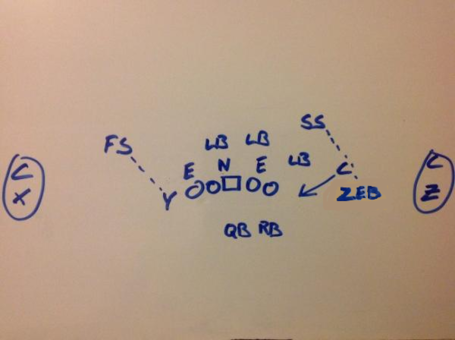 The Colts decided to run a cornerback blitz, meaning they are highly likely to play man coverage behind it. The circled match ups outside are the obvious ones. After that the potential man coverage match-ups have been drawn with dotted lines. 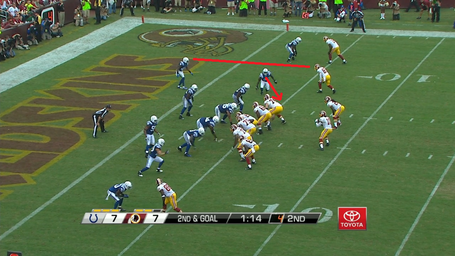 But the biggest mismatch, and therefore the key match up, is receiver Santana Moss against the Colts safety. 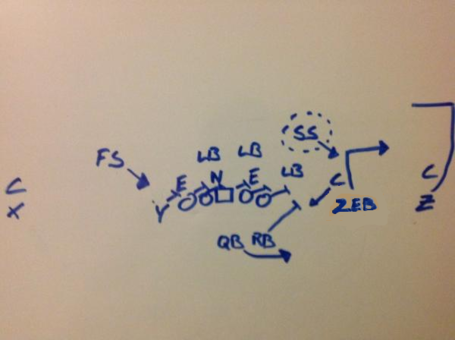 The route combination is a good one. Moss has a quick out, while the outside receiver, in this case Joshua Morgan, has an in-breaking route in the back of the end zone. As the Colts are trying to disguise the cornerback blitz, the safety can't play directly over the receiver. Meaning there is no realistic chance of the safety being able to cover an outside throw. 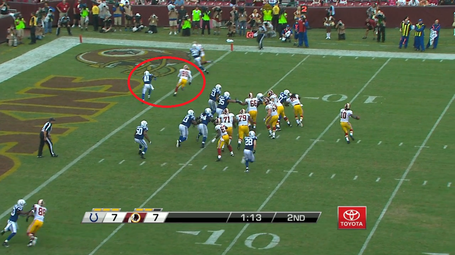 The offensive line, with some help from Tim Hightower was able to pick up the cornerback blitz. Because of the stretch run plays we had been running successfully, the linebackers were drawn in thinking it was a possible run. Afterall, rolling the pocket to the right looks a lot like a stretch run to the right. I mentioned earlier that because the safety couldn't line up directly over Moss, there was no realistic chance of the safety being able to cover any outside route. As you can see, Moss is wide open. 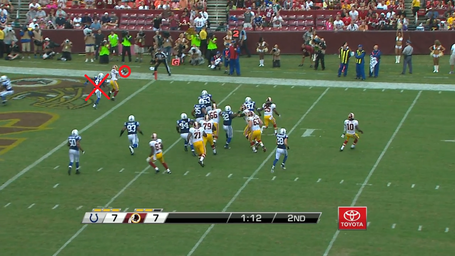 All that is left for Griffin to do is throw the ball, making sure he keeps it to the outside so the safety can't undercut the throw. The placement is excellent, and it's an easy red zone touchdown for the Redskins, something we haven't been able to say all too often these past few years.

I thought it was a brilliant play call by Kyle Shanahan. The real beauty of the play is the options the Redskins could have run off of it. If the safety had somehow covered Moss, you have the Z receiver cutting back across the end zone. But if all else fails, Griffin could always keep it himself and run it in. With those kind of plays, and the mobility of a quarterback like Griffin, you have the ability to put the defense in lose-lose situations where they can't cover all the options.

But those are just my thoughts. What did you think of this call, and the performance in general? Let me know in the comments below.