Alfred Morris Staking His Claim For a Roster Spot

Share All sharing options for: Alfred Morris Staking His Claim For a Roster Spot

Rookie running back Alfred Morris has found himself in a favorable position in his quest to make the final 53-man roster. The expected starter, Tim Hightower, is still recovering from his torn ACL that he suffered early last season. His absence left Morris behind last year's draft picks, Roy Helu and Evan Royster. But recently we've heard about a troublesome achilles for Helu, sidelining him for an unknown period of time. With the injuries at running back piling up, the Redskins decided to give Morris his shot with the first team against the Bears this past Saturday.

We've talked about Morris previously here at Hogs Haven. I wrote a post about his potential fit in the scheme back in July by looking at some of his college film. Steve also wrote a piece about how he felt Morris had performed in his first preseason appearance. But today I thought we'd go back to the Bears game, to see how he fared against a formidable Bears first team defense (Hint: I was very impressed). 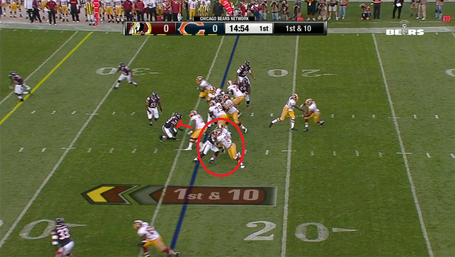 Here we have the first run of the game. As Morris receives the hand-off, he can see that Chris Cooley and Niles Paul have a combo block on a defender. But Morris knows that Paul is only chipping the defender, and that the defender still has the outside leverage on Cooley. So as a result, Morris cuts inside. 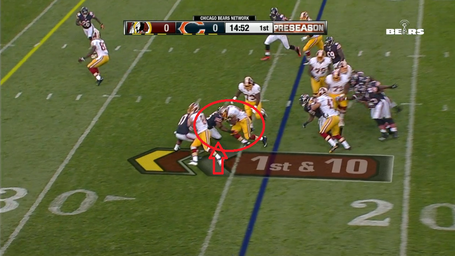 As Morris runs through the hole, he is met by a Bears linebacker. Morris embraces contact, and gets very low, attempting to get under the linebackers pad level. He gets so low that the linebacker's knee actually goes to the ground, at which point Morris can just bulldoze over him. 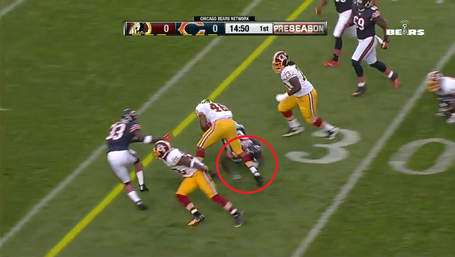 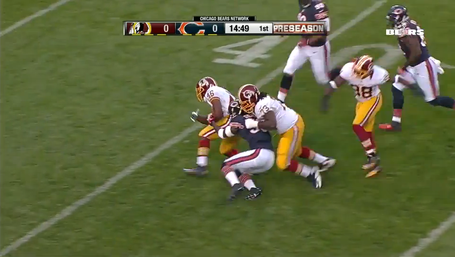 Charles Tillman breaks free of Pierre Garcon's block attempt, and starts to wrap up Morris. But Morris keeps his legs pumping, and guard Adam Gettis is there to help him out. 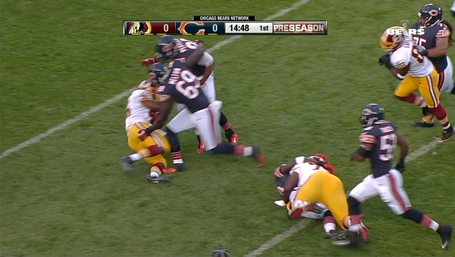 Morris is eventually brought down by a gang tackle. But he managed to break three tackle attempts and pick up 21 yards in the process, much of which came after the initial contact.

The very next play, they give the ball straight back to Morris. 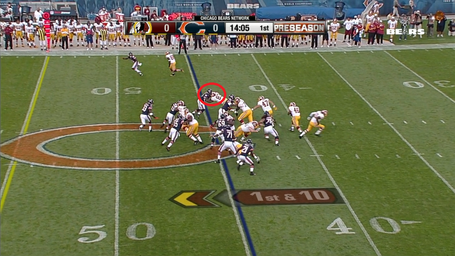 Once again Morris reads the tight end, and see's that Fred Davis has given up the outside leverage. 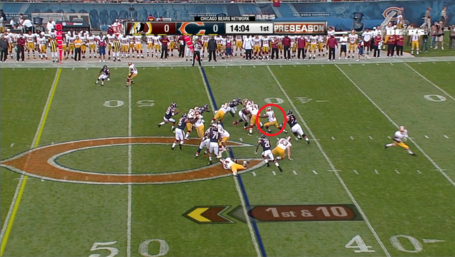 But with right tackle Tyler Polumbus having given up the outside leverage as well, Morris is forced to cut inside him as well. 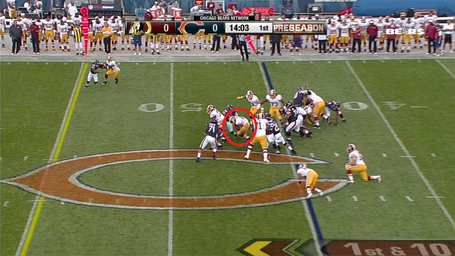 Morris once again gets very low to the ground with a good forward lean as he braces for contact. 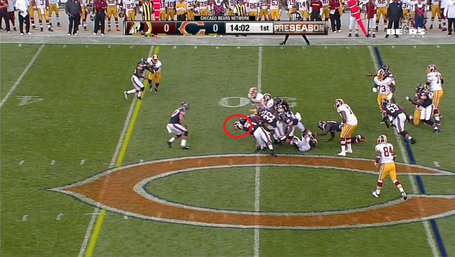 Four yards later, he has three or four Bears defenders hanging off him as he falls forward for extra yards. He picked up six yards on a play that wasn't particularly blocked all that well.

Moving on to later on in the first quarter. Morris is forced to cut inside early again. 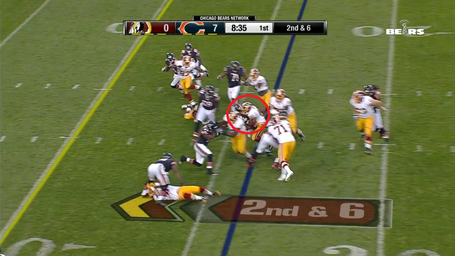 As he reaches the line of scrimmage, he comes head to head with seven-time pro-bowl linebacker Lance Briggs. 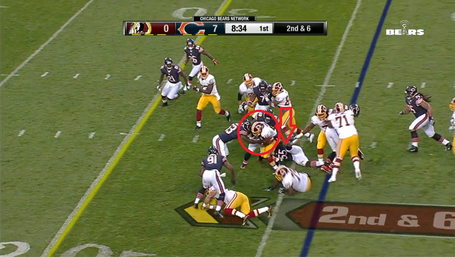 Wait, is that the pro-bowl veteran linebacker Lance Briggs on the floor?? Morris powered over him and continues to be a handful for two Bears defenders. 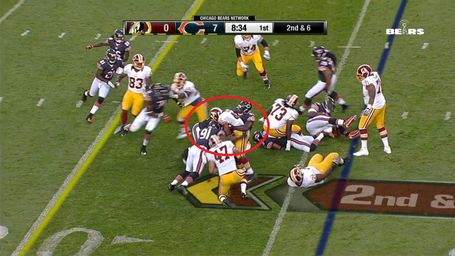 It's only when linebacker Geno Hayes joins the other two Bears defenders are they able to halt Morris' progress. Morris may only have gained a couple yards, but it was another play that wasn't blocked well, and shouldn't really have gained anything, yet Morris turned it into positive yards.

The last thing I want to look at is Morris' balance, which I noted in the post back in July (link above) that I thought was very good. I think that was an understatement. After watching the way he stayed on his feet and kept upright despite taking hits from all angles was amazing to me. Lets have a look. 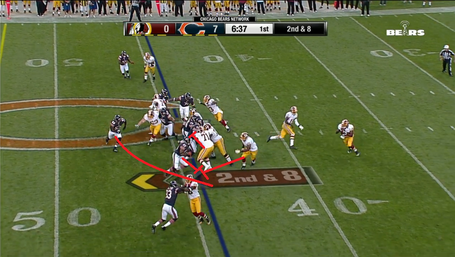 Here we have an outside toss play. The key thing to notice is that Trent Williams has focused his block inside, leaving the outside containment defender free. 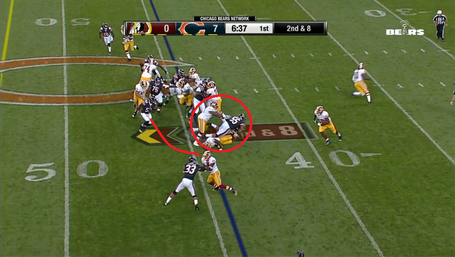 Fullback Dorson Boyce is forced to take the most immediate threat, which was left to him by Williams. Williams attempts to recover by helping Boyce on the block, but that leaves the spare linebacker with a free run at Morris. 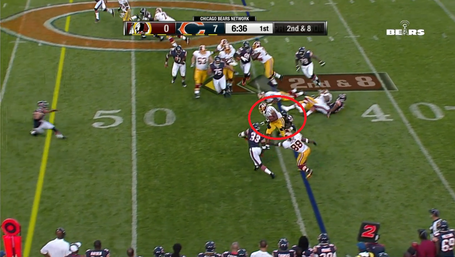 The linebacker attempts to dive and wrap up Morris. But Morris shrugs off the effort while barely breaking his stride. His next most immediate threat is cornerback Tillman, who has peeled off the block from Garcon. 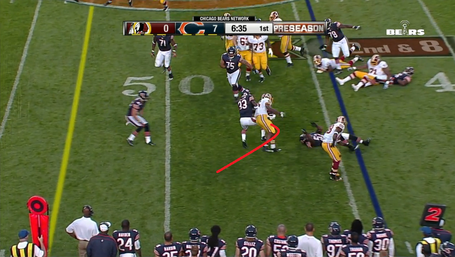 Morris absorbs the hit, using the momentum from Tillman's hit to help spin him around quickly and drive him forward. 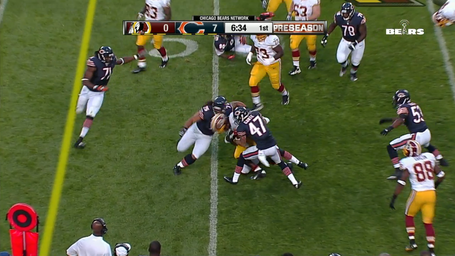 After a joint effort from Tillman and the safety can't fully do the job, a defensive tackle comes across and forces Morris to the ground, but not before every last yard available on the play was squeezed out.

As I said earlier, his ability to stay balanced while absorbing hits amazes me. Yes, this was only a preseason game, and yes it was his first run with the starters, but it's a very encouraging start from my point of view. He has the tools needed to be at least a solid running back in this league in my opinion. That balance and ability to absorb and give out hits might take him a level higher than just 'solid'. With the injuries to the current group of guys that we consider 'locks', I feel that Morris is almost a lock himself. I'd certainly be keeping him, but what's your view? Let me know in the comments below.