Share All sharing options for: Adam Gettis and Cut-Blocking

Throughout the first two preseason games, we've seen fifth-round rookie Adam Gettis line up as the starting right guard in place of the injured Chris Chester. While he got off to a promising start in the Bills game, he had his fair share of struggles against the Bears. One thing I noticed most when I watched back the Bears game was that his cut-blocking was sub-par, which I tweeted about not once, but twice on Sunday. Yesterday, Redskins beat reporter for the Washington Times, Rich Campbell, tweeted this.

Rookie RG Adam Gettis on how his cut-blocking has been in 2 games: "Not so great." I'll share more from that conversation soon. Good insight

Campbell told me his article on that will be out on Friday afternoon or Saturday morning, so be sure to check that out. But onto the topic at hand, if Gettis himself acknowledges that his cut-blocking has been "not so great", then you know it's a problem. After the jump, I'll show you some of the failed cut blocks.

The goal of cut-blocking is to cut off the backside of the play by delaying the rush of the defenders enough so they can no longer make a play on the running back. 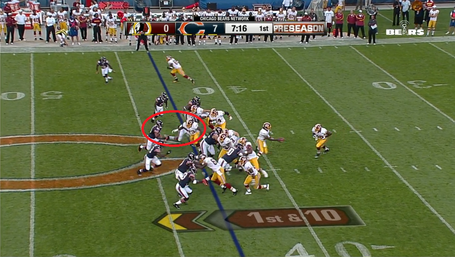 Here Gettis is asked to cut-block a linebacker. 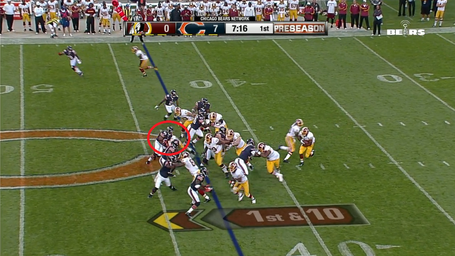 He cuts from the side, rather than the front of the player. The linebacker can just bounce off him, rather than having to use his hands to stop the block. 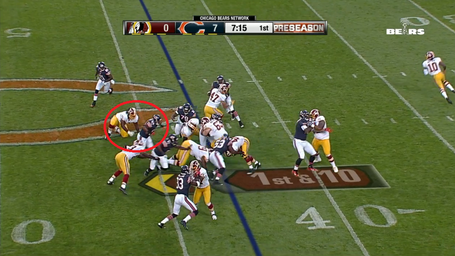 As you can see, the defender was pretty much unfazed by the cut-block attempt, and was in a position to make a play, should running back Alfred Morris have gotten that far.

On this next play, Gettis was assigned with cut-blocking a defensive lineman. 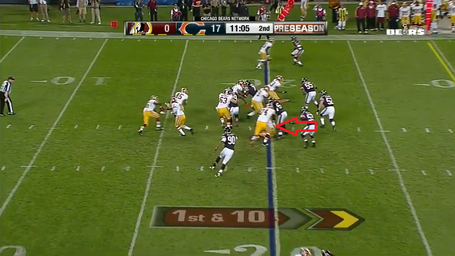 He dives at the feet of the lineman pretty much straight off the snap. He needs to attack the waist of the defender to get his attention and force him to use his hands to get past him. But as you can see here, the defender isn't really deterred from his pursuit of the ball. 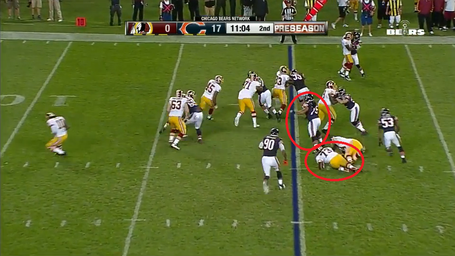 He is easily able to get past the cut-block attempt, and is in the perfect position to make a play if the runner cuts back. In typical Redskins fashion, the block actually tripped up our own player, right tackle Tyler Polumbus. The backside of the play was clearly not cut off here.

Those were just two of the five or so I noticed throughout the game. The angle and height of the cut-block are what Gettis needs to work on from those plays above. Remember the objective isn't always to cut the player completely to the ground, but to delay the rush long enough that he's no longer a factor in the play, and that wasn't the case on the majority of Gettis' cut-block attempts.