How Reliable is Fred Davis as a Run Blocker?

Share All sharing options for: How Reliable is Fred Davis as a Run Blocker?

This morning I was catching up on all things Redskins when I saw this post over at httr24-7.com. It contains five to six hours of video footage of former Mike Shanahan assistant and proponent of the zone blocking scheme, Alex Gibbs, at a session he ran looking at the zone blocking scheme. I highly suggest watching over the videos if you have the time. But while I was watching them, the impact of the tight end stood out. On most plays, he's the primary read for the running back. If the tight end gets the desired outside leverage, the running back continues outside on his run. But if the tight end gives up the edge, the running back is forced inside with his read.

Sitting on top of the Redskins tight end depth chart currently is Fred Davis. Now we all know how much of a weapon Fred is when he's running routes. But his run blocking has always been suspect. There were reports that he had been working on his run blocking in the offseason, so I went back and watched over the run plays when it was first team offense against first team defense. Unfortunately, the results weren't great for the Redskins. 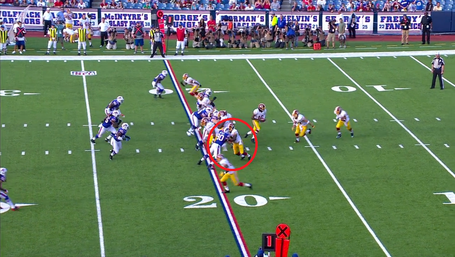 This is the first play of the game. Davis gets too upright straight out of his stance, forcing him to play the defensive end too high. The end also has some slight outside leverage already, meaning running back Evan Royster will probably be forced inside. 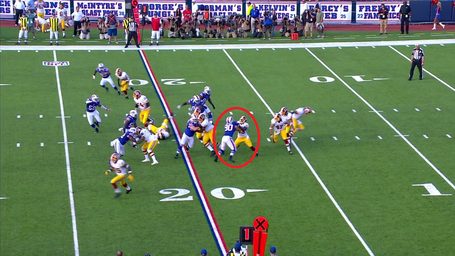 Because the defender is able to get under him, Davis is driven back behind the line of scrimmage before he can event attempt to anchor. At this point, the edge has been set and Royster has no option but cut back inside, as the outside read isn't there.

The next play, the Redskins run right. 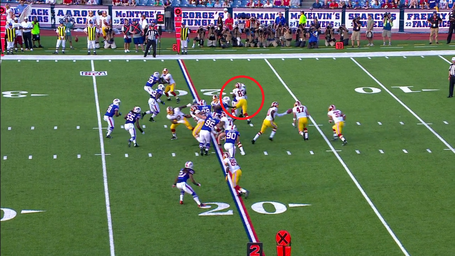 Once again, Davis is caught playing too high, and giving away the outside leverage before the ball is even in Royster's hands. 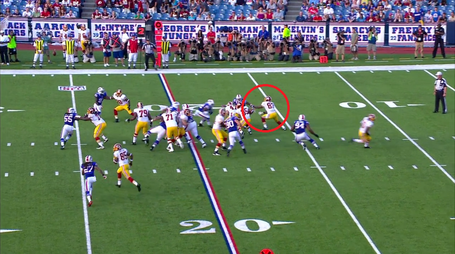 Royster is forced inside again. But look at Davis, circled in red. He couldn't maintain his block, allowing the defender to make a play on the ball after manipulating Davis to get into a good position. Royster is stopped int he backfield for negative yards. If you have watched the videos linked above, you'll know this offense is designed to eliminate negative runs, to eliminate third and long situations.

In the ideal world for the Redskins, they run on first and second down, and arrive at third and three/four. Then they can run a quick short pass for the first down, while lowering the chance that Robert Griffin III gets hurt behind a shaky offensive line. But that can't happen if mistakes are causing negative plays. Just for reference as well, these plays aren't all on Fred, but he certainly doesn't help.

Onto the next series, and another bad block by Davis. 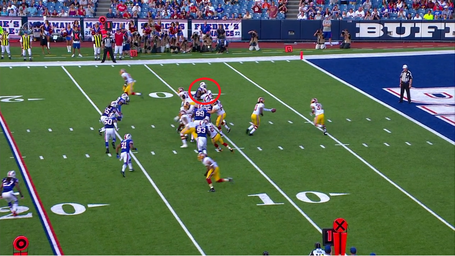 This time Davis manages to stay somewhat low, but still concedes the edge to the defensive end; once again forcing the play inside. 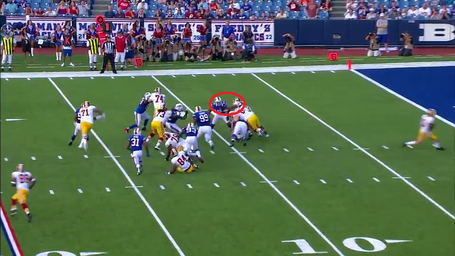 Just like the last play, the defender manages to shred the block of Davis and get in a position to make a play. But a defensive tackle had already driven Will Montgomery into Royster for the tackle.

Now to Fred's credit, he did have one good run block with the full first team. 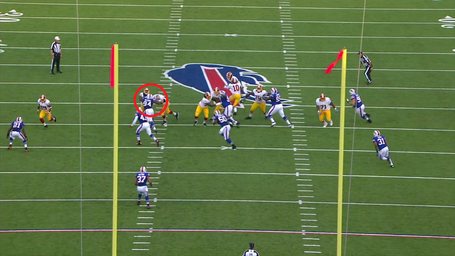 You can see here, he manages to get outside leverage on the defender, and start him running thanks to some help from right tackle Tyler Polumbus. Now Fred still looks a little bit tall there for my liking, but he gets away with it. 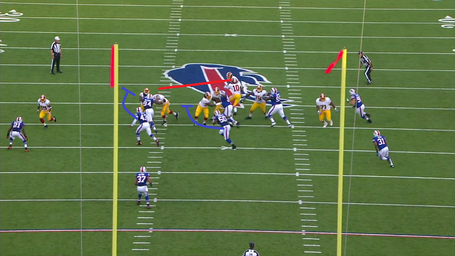 Because the defensive line are blocked effectively, the linebackers are brought into the play. One of them is forced to get outside to defend the edge, meaning the other has to come across to plug the big hole between right tackle and right guard. 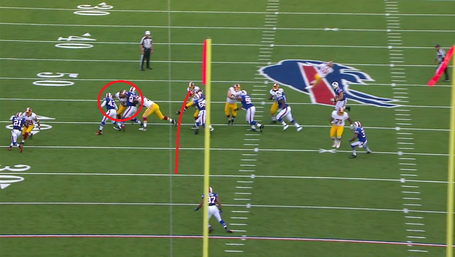 With a defender running out to cut off the outside run, Royster can now cutback inside and take him out of the play. Rookie Adam Gettis does a good job moving up onto the second linebacker, creating a big hole for Royster to run through.

That's exactly how the zone scheme is meant to work. Royster picked up 12 yards and a first down in the process. But that was the only good run block I saw from Davis when running with the full first team, which is disappointing. The tight end role is important in the zone scheme, and Davis needs to be a somewhat effective run blocker to be that extra bit more dangerous as a receiver in the play-action bootlegs coming off those zone runs.

What do you think? Will Fred Davis become a reliable run blocker, or just an athletic receiver? Let me know in the comments below.