Don't Forget To Use Protection!

Share All sharing options for: Don't Forget To Use Protection!

With the Redskins finally looking set at quarterback with Robert Griffin III, or as some are calling him 'Bobby Griff', the attention turns to keep him protected. The offensive line are the men tasked with keeping Griff upright. There are many different protection schemes that have been drawn up down the years, and the west coast offense is no exception to that. But today I'm going to look at a few of the most common west coast offense protection schemes. The first (and most common) is 2 Jet, also known as 200 Jet.

2 Jet is a simple six man protection scheme, including one back along with all five offensive lineman. The basic concept is to slide four offensive lineman to the weak side of the play, leaving just the tackle and the back to block the defensive end and linebacker on the strong side.

Just a note on these pictures. In the top left corner of each box, you'll see 34 or 43. That indicates how the blocking scheme is designed against different defensive fronts. On the left, you have what it looks like against a 3-4 defense, on the right is a 4-3 defense. That will be the same throughout this post.

The example above has the strong side of the play to the right, where the tight end is lined up. In this situation, the two guards, the center and the left tackle would all slide to the left, which is the weak side of the play. The right tackle would block out the defensive end, leaving the back as the sixth protector. He has to read both the Mike (middle) linebacker and the Sam (strong side) linebacker. 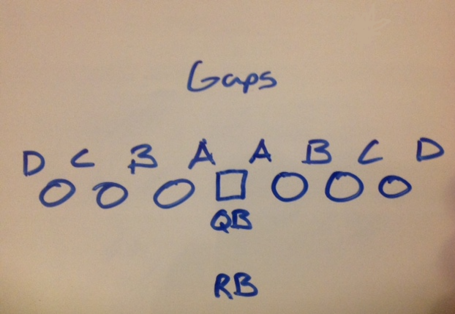 The back is also to be alert for any safety blitz. If neither linebacker or safety are blitzing, then the back is free to release into a route.

The reverse of that is 3, or 300 Jet. This is where the line slides to the strong side of the play. Here's an example from the same formation.

As you can see, it looks pretty much the same as 2 Jet. But this time, the left tackle is left to block the weak side of the play while both guards, the center and right tackle slide to the right. The back still has A/B and C gap responsibilities, but this time he's reading the Mike and Will (weak side) linebacker. Otherwise it plays out the exact same way. His first responsibility is the A/B gap, then the C gap, and then he can release into a route.

The last protection I'll look at today is called Fox 2. You'll see this one is almost the same as 2 Jet as well, but it's a seven man protection scheme instead of six. This is what it looks like:

The major difference is that you have two backs, both with blocking assignments. The fullback is assigned with blocking the Mike in either the A or B gap depending on the defensive alignment. The running back has the responsibility of the C gap. There he should meat the Sam backer. Both backs are on alert for the safety should he blitz.