Share All sharing options for: Redskins Experimenting With Pistol Formations?

If you were following along on NFL Network's live coverage of training camps across the league as I was this afternoon, you might have noticed a few clips of the Redskins running out of different 'Pistol' formations. This is something we haven't seen from the Redskins or a Mike/Kyle Shanahan offense before. I tweeted about the pistol formation while practice was taking place, but I thought I'd go into a bit more detail here.

The very basic concept of the pistol is that the quarterback is lined up in-between shotgun and under center. In a full shotgun formation, the quarterback will line up five yards behind the center with any backs next to him, like this: 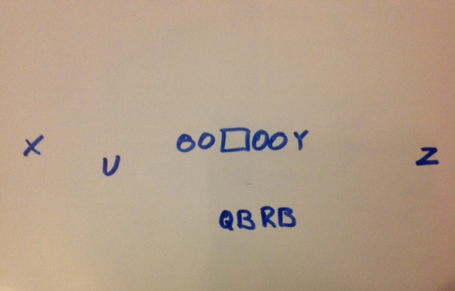 Whereas in the pistol, the quarterback lines up just three yards back from center, with the running back directly behind him. I show you what it looks like, after the jump. 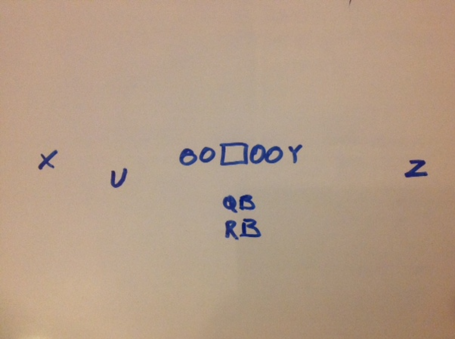 But perhaps the best look at it is from the sidelines of camp today. 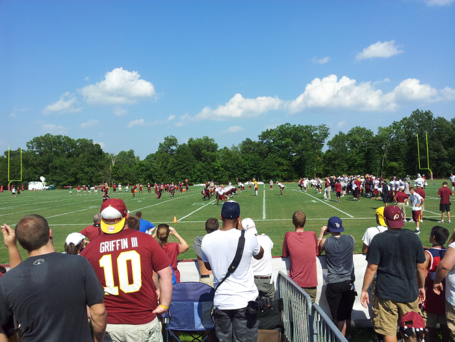 Picture taken by Hogs Haven member "Rodskin" (not to be confused with "Rodskins").

You can see from the side angle that Robert Griffin II is stood three yards behind center, while the back is a further couple of yards behind him. That is the basic concept of the pistol formation and what it looks like. But why might the Redskins be experimenting with such a formation?

The pistol formation has plenty of advantages to it. One of the biggest advantages is that it helps the run game. It cuts down the time between the ball being snapped, and the running back securing the ball. This allows the back to get to the point of attack quicker, giving the defense less time to react. It also helps the offensive line with their protection. With everything happening faster, they don't have to maintain blocks as long as they might in other formations. It also allows Griffin a better look at the defense (standing up instead of under center), while not being fully in the gun.

The tempo in the pistol is generally a lot quicker. As the quarterback is already at a depth of three yards, he has the full range of drops to work with, but can get to them quicker. He starts at the three step drop already, so he can just catch, rock and throw. To get to five step depth, he only needs to take two steps and to get to seven step depth, he only has to take four steps. All of this means he can get to the required depth quicker than he could under center, and have time to sit on his back foot to evaluate his options.

However, there are downsides to the pistol formation. While Griffin can get to his desired depth in the pocket quicker, the receivers will still take the same amount of time to run their routes. This can create timing issues for Griffin if the Redskins switch between under center formations and the pistol.

The other major downside is that play-action passes aren't as effective from the pistol. As a result of the fake hand-off happening quicker, the linebackers and safeties will identify the play-action earlier, meaning the receivers have little time to gain an advantage over their defender. With Griffin's athleticism, I think we all expect play-action to be a big part of his game, but the pistol might not be the best option for that.

Speaking of options (that's my segue, I'm sticking to it!), I think the Redskins main use of the pistol formation will be for the option run game. The option is just as easy to run from the pistol as it is from the gun, and can even be more effective. Again, the tempo of everything makes it harder for the defense to react, and that's where Griffin's 4.3 speed would kick in. Here's one example of an option run from the Pistol that I drew up on the whiteboard: 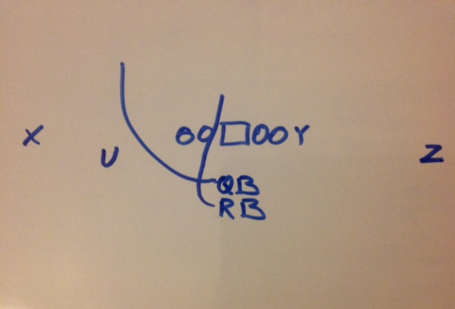 I've explained the basics of the option offense before, but I'll quickly recap this play anyway. Griffin would essentially be reading the defensive end lined up over the left tackle. The end would be unblocked and allowed to run free. If the end crashes inside to stop the run, Griffin keeps the ball and bursts outside. But if the end stays put, Griffin hands it off and the running back gets an extra blocker.

As I said earlier, I think if we see any pistol formation this season, it will be used in conjunction with the option game most of the time. But there is also Park's theory, which is more of a conspiracy, that the Redskins are just showing us this as smoke and mirrors only to catch teams off-guard with tight end heavy, power runs. But I'll let you guys debate that in the comments.