Share All sharing options for: Last Week of Vacation for Redskins Veterans - Here's What They're Up To

The Instagram picrures are great....make sure to click on them. I know a lot of people will like seeing that Trent Williams is working out with Adrian Peterson.

London Fletcher at Disney World with his kids...

He was so tired he laid down in the middle of Disney! instagr.am/p/NO5qQeh3VI/

Lorenzo Alexander, Kedric Golston, and Chris Wilson are at a lake house in Virginia for the week.

My view for the past week! instagr.am/p/NR-u2bh62C/ 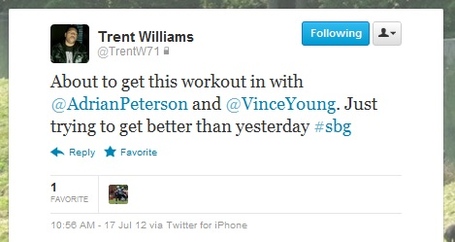 Unbelievable rainbow trout on the blue river. Last day of fishing before I head back to the #DMV. Great fish instagr.am/p/NCTzvbvCdj/

Great time at my camp today with the kids!!!

USA vs Brazil at Verizon Center in DC I'm there

Thanks to @CHICKatCSN @RobCarlin and all of @csnwashington for letting me guest anchor today! I had an awesome time! #imRyanKerrigan?

It's not everyday you get to meet Hank Aaron #legend twitter.com/RyanKerrigan91…

Markus White got to meet Lebron when team USA was in D.C. playing Brazil