Anthony Armstrong didn't have the season last year that he thought he would heading in 2011, but one soggy day in Seattle, he came up huge. On third and 19, down by 3 with 6:29 left on the clock, Rex Grossman threw a bomb to Armstrong deep in the end-zone.

Armstrong was closely defended by Seattle corner-back Brandon Browner, who quite noticeably interfered on the play as well. The end result was a spectacular 50 yard touchdown catch by Armstrong, who immediately did the 'Dougie' afterwards in celebration. The score put the Redskins in the lead for good, they would go on to win the game 23-17 which ended a 6 game losing streak. 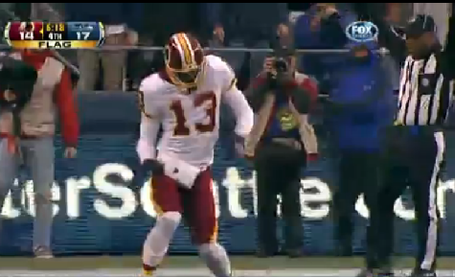