Kyle Shanahan hasn't had a lot of chances to get wild and wacky and open the playbook up since arriving in DC. But that's exactly what he did on the first play of the second quarter of last years week 14, home match-up against the New England Patriots.

The play started out as a routine hand-off out of the shotgun formation to Roy Helu. Helu cut to the right and tossed the ball to Brandon Banks who appeared to be coming back around for a reverse play. As Banks came around the left side Rex Grossman threw a decent block on former Redskin Andre Carter and gave him just enough time to shock Fed-Ex Field by throwing a 49 yard pass to Santana Moss.

The pass, which Banks threw left-handed, was actually just a bit short on the play meaning a wide-open Moss had to slow down and come back a little. As Moss caught the ball he juked a little and Kyle Arrington dove for him/ball and missed, the only other defender around, Matthew Slater, tripped over Arrington. All that was left for Moss to do after that was tip-toe into the end-zone and make a 'Landover Leap' into the front row of fans. 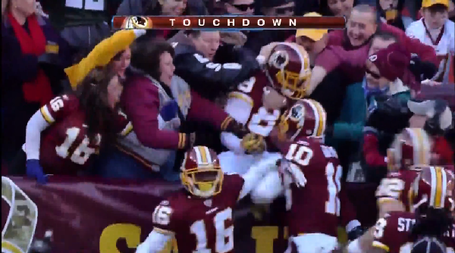