Share All sharing options for: Best Play of 2011 Nominee: The Helu Hurdle

Even though 2011 may have been a rough season for the Burgundy and Gold, not everything was bad as the Redskins did put together some impressive highlights.

Flashback to week 12, a game played on the road in cold and rainy Seattle. With just under ten minutes left in the game, on third and three and down by ten points, Roy Helu put the Redskins on his back and ran with them, literally.

It was a simple stretch play to the left, but everybody along the way did their job as Santana Moss, Donte' Stallworth, Fred Davis, Chris Chester and Trent Williams all sealed their running lanes effectively. Roy Helu darted to the left of the line and headed straight for Seattle cornerback Roy Lewis, Lewis, who was in perfect position to stop the play made his move for a down low tackle, and Helu pulled off a magic act by effectively hurdling the man all together. After completely clearling Lewis and landing, Helu then absorbed safety Kam Chancellor's hit, breaking the tackle, he then sped off down the field for a thirty yard touchdown.

What makes this play so special outside of the incredible athleticism he displayed, is that it was Helu's first NFL touchdown and it was part of a 30 carry, 162 yard breakout performance for the rookie. The play was later chosen by ESPN as the No. 4 play of the entire NFL season. 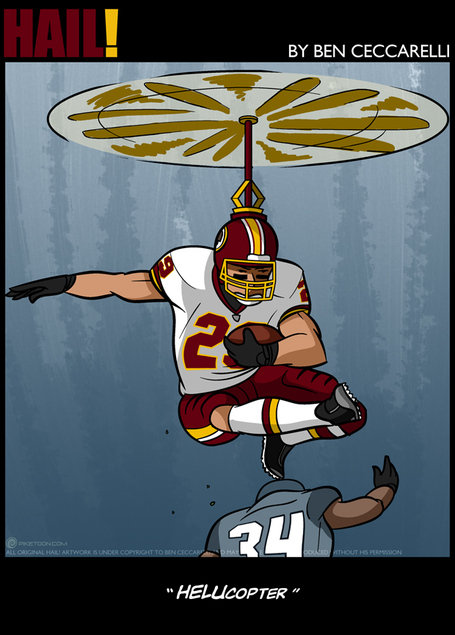