Share All sharing options for: Redskins 2011 Offense Review: Week 15 At Giants, First Half

This is a series of posts where I look back at the Redskins offense in 2011 and review any tendencies or other things that I notice along the way. I started last week by looking at the home opener against the Giants (If you missed it, check out the first half here, and second half here). This week I thought we'd stick with the Giants to see if the Redskins took a different approach.

The first thing to note is that by week 15, the Redskins offense, and offensive line in particular, had been severely weakened by injuries and suspensions. The Redskins couldn't call upon Trent Williams, Kory Lichtensteiger, Fred Davis, Chris Cooley and Tim Hightower. That's half of the starting offense unavailable. And yet, the Redskins still found ways to attack the Giants defense effectively. We scored 24 points in the game, and it could easily have been more. I give full credit to Kyle and Mike Shanahan for coming up with plays to pick up yards while having a patchwork offensive line.

It was always going to be tough to expect the Redskins line to be able to effectively block a very strong defensive line rotation from the Giants. So Kyle called a fair amount of gimmick plays to catch the defense off-guard, and subsequently make it easier for the line to hold the protection. The first play of the game is a perfect example. They run a flea flicker, with Santana Moss getting open deep. 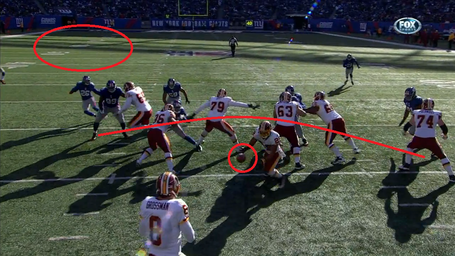 As Roy Helu tosses the ball back to Rex Grossman, you can see the amount of space Rex has. If this was just a typical drop-back, I can guarantee Rex would never have this amount of time and space in the pocket. He can see the wide open area deep to his left, where Moss is running open. 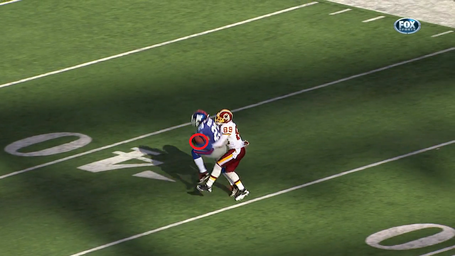 But of course, with it being Rex Grossman, the ball is underthrown. Moss has to stop his route to come back for the ball. The corner is able to make up ground and get an interception. But the idea was spot on. With Robert Griffin III back there, the chances are that would have been a first play touchdown.

But the gimmick plays didn't stop there. To help open up the run game, Kyle called for an end-around reverse play, which resulted in Anthony Armstrong running for a big gain. 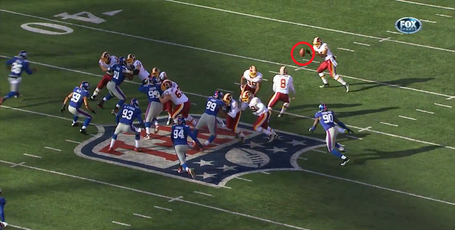 Grossman tosses the ball to Helu, who begins running left. 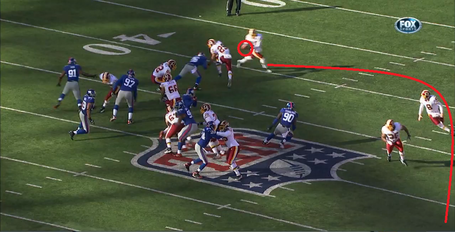 Helu them dumps the ball off to Armstrong, who has run around from his receiver spot on the far left of the field. 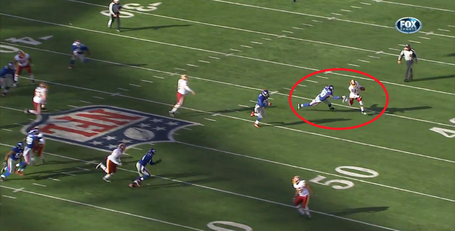 Armstrong is pushed wider than he would have liked by Jason Pierre-Paul, but manages to avoid his diving tackle attempt. 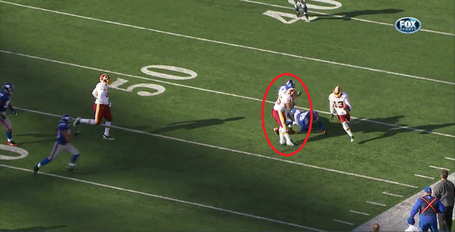 Fullback Darrel Young then throws a mean block downfield to allow Armstrong to continue down the sideline. He's eventually pushed out of bounds after picking up 14 yards.

Kyle Shanahan went deeper and deeper into his playbook, and found a reverse run for Niles Paul. 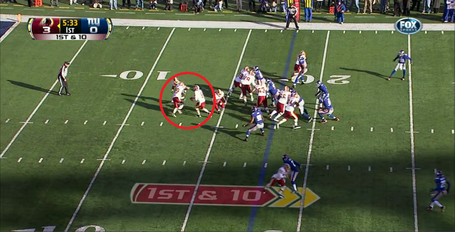 The hand-off is faked to Helu first, to get the defense running one way. 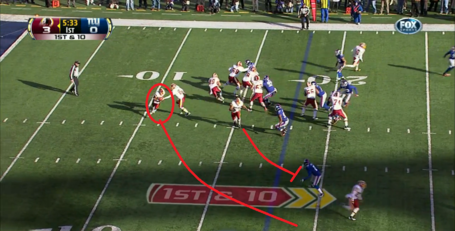 Young makes a good decision to run past the defensive end and block the outside defender. Paul follows his block and runs outside towards the sideline. 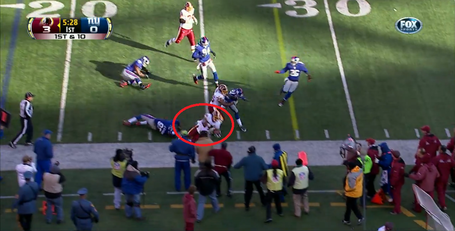 Paul is pushed out of bounds for a six yard gain, but they pick up a first down after a defender grabbed Young's face-mask while bring blocked.

One thing that was obvious was that the Redskins made a deliberate attempt to toss the ball to the running backs, rather than directly hand it off. But they continued to be inventive with how they blocked up front. 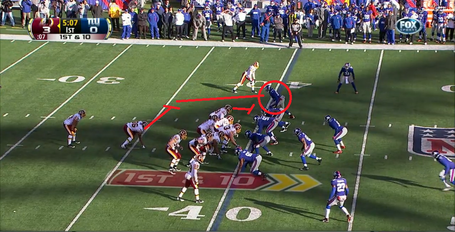 Here, left tackle Willie Smith allows the defender circled in red a free run past him. Smith down blocks inside on the defensive end in effort to close off the inside. Young comes across to cut block the free defender, leaving Helu to burst through. 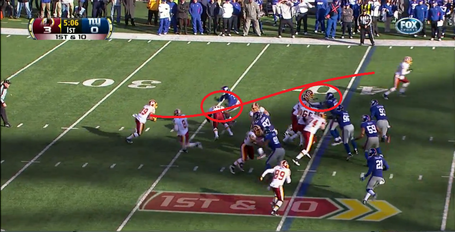 Because of the toss, Helu gets the ball in his hands earlier, allowing him to attack the line of scrimmage quicker. This means the offensive line doesn't have to hold their blocks for quite as long as they would normally. Helu gains a solid six or seven yards on this play.

Of course, there is a downside to tossing the ball. There is always the chance for a fumble. Helu doesn't take this next play cleanly. 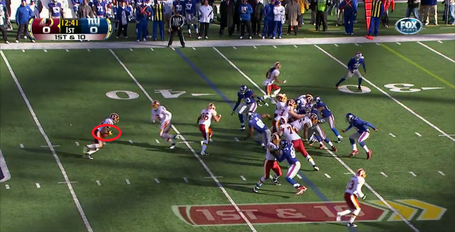 You can see here that the ball isn't secured here, its starting to slip through his arms. 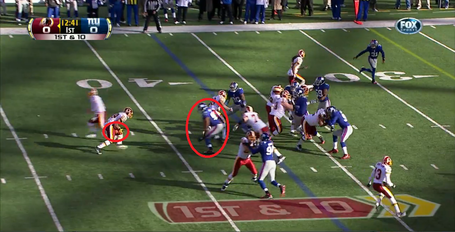 So instead of focusing on eluding the defenders in front of him, Helu has to make sure he secures the football. Pierre-Paul hits him hard, and he does well not to fumble.

But there are also other benefits. Such as the fullback hand-off. 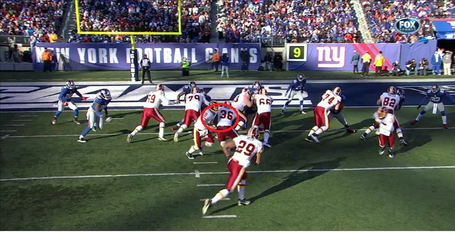 Here, the ball is handed off to Young. But because they had been tossing to the back, Grossman can still fake the toss to catch some of the defenders in the play-fake. 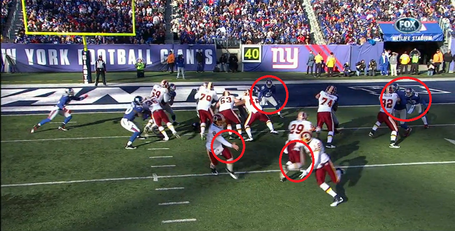 Grossman fakes the toss and the reverse. You can see the defenders that are fooled by the play-fake. Young bulldozes over a couple of defenders on his way into the end zone for a touchdown.

The final thing I took note of in the first half was how the Redskins deliberately set after Prince Amukamara. Here's a couple of examples from the second quarter, 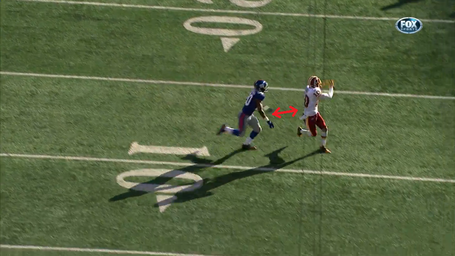 Here, Jabar Gaffney gets an inside angle on Prince. Prince has somehow allowed a yard of space between himself and Gaffney If the throw is in front of Gaffney, this is probably a touchdown. Sadly, Grossman's throw is badly placed and Prince can break up the pass. But this didn't stop the Redskins going back at him. 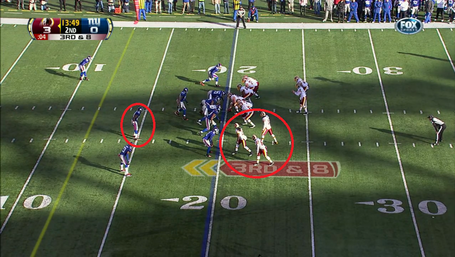 They line up in the trips on a third down. If you remember in the first game, they did this a lot. 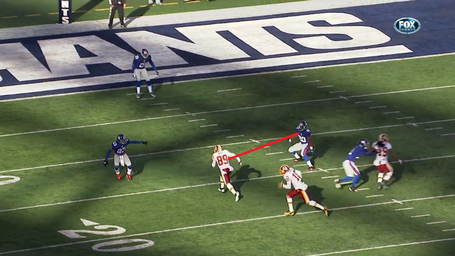 The trips appears to confuse Prince, as he allows a big gap between him and Moss before he starts to chase him. 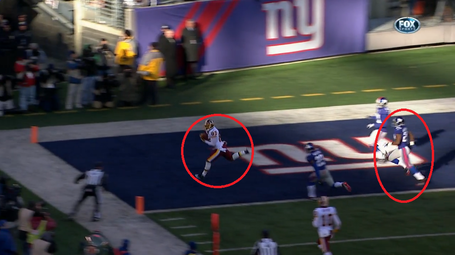 Moss is wide open in the end zone for a touchdown, with Prince trailing in the dust behind him.

The Redskins were relentless. They had no fear to go after him with whatever match up they could get. One play, they even motioned Helu out of the backfield. 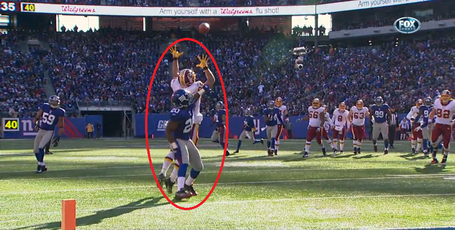 Helu managed to get a great position on Prince. If the ball hadn't been as high as it was, Helu would have come down with it. 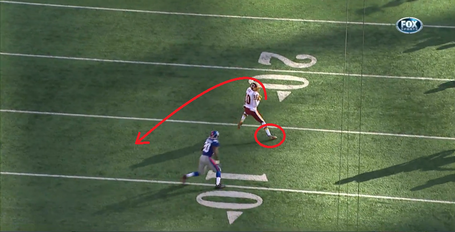 Here they run a slant. Gaffney has plenty of room to catch the ball, put his foot in the ground, and spin outside. 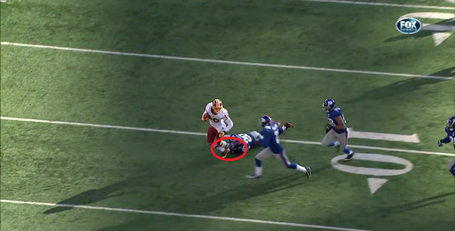 Prince makes a last ditch effort to make the tackle and manages to trip Gaffney up, but not before Gaffney had worked his way inside the ten yard line. I love that the Redskins picked a corner to attack, and just went after him with whoever he was matched up with. The Giants were later forced to keep Prince out of the game, even on a third down with multiple receivers on the field.

That just about wraps up my first half notes. I was impressed with the inventive solutions Kyle Shanahan came up with to combat the deficiencies along the offensive line against the always strong Giants defensive line. What do you make of all this? Let me know in the comments down below.