Predicting the Most Disappointing Game of 2012 : The Panthers Game

Share All sharing options for: Predicting the Most Disappointing Game of 2012 : The Panthers Game 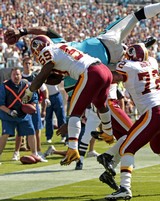 When first looking at the Redskins schedule this year, I must admit that the St. Louis Rams game looked to have "trap" game written all over it. But since Parks already touched on that game, the second game that stood out to me is the November 4th game at home, against the Carolina Panthers. The Panthers were a much improved team a year ago behind Cam Newton's unreal rookie season and Steve Smith's resurgence, and they look to be even better this year.

As most all Redskins fans know, the team has had issues dealing with mobile quarterbacks as of recently (vs. Vick 0-3, vs. Cam 0-1, vs. Joe Webb 0-1, they gave up a combined 912 yards passing 7 touchdowns and 156 yards rushing to them last year alone). Even factoring in the thought that they do have Robert Griffin III in practice now to help prepare for a mobile quarterback, I don't think 2012 will be much different when they play the likes of Newton again. Whether he is throwing or running, the chances they get 'Cam'd' in front of the home crowd are very good.

This will be a home game before the bye, after two difficult road trips, one to New York to play the Giants (10/21), and one to Pittsburgh to take on the Steelers (10/28). It should also be noted that the Redskins have a very tough four games in a row after the bye as well, making this game a must win. Hopefully I'm wrong, but the pressure from needing to win this one, on a young Redskins team, is something that will show in the final box score.

Having a young team is going to lead to a few disappointing losses along the way, I am predicting the Redskins to finish 9-7 this year, and this is one game I have them losing. Of course my predictions cannot foresee injuries, slumps and under-performance, hence the reason they play the games!