Conversation Starters : Comparing Keenan Robinson to a Player From Redskins Past

Share All sharing options for: Conversation Starters : Comparing Keenan Robinson to a Player From Redskins Past 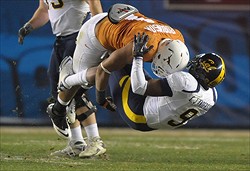 So keeping in line with the previous posts by the same name, I wanted to compare a recent Redskins draft pick with a former Redskins player from days past. I selected Keenan Robinson, the 6-3, 242 lb, linebacker the Redskins drafted in the fourth round this year out of Texas. Robinson started 39 games at Texas and was selected to the All-Big 12 team twice, he recorded 317 tackles with 25 for loss, 5.5 sacks, two interceptions, three fumbles forced and two fumbles recovered.

Some already view Robinson as a possible future starter once London Fletcher retires, one thing is for sure, and that is learning behind Fletcher will indeed aid in the process. He also has another former Longhorn to help him along in teammate Brian Orakpo, who had this to say in a recent interview on Homer McFanboy's blog.

"He's gonna be good, man," Orakpo said. "He's learning. Obviously he didn't play mike linebacker in college, but he's evolving.He's learning the mike and the jack and he's going to learn a lot from the other inside linebackers" - Brian Orakpo- on Homer McFanboy

Because of the obvious size similarities, Robinson reminds me of Redskins Legend Monte Coleman. Coleman measured up at 6-3, 240 pounds and ran the forty in 4.4 seconds (Robinson run's a tad slower at 4.7). If the Redskins can get half of the type of production out of Robinson that Coleman gave as an eleventh round draft choice who played all of his 16 seasons with the Redskins, then they will very satisfied. 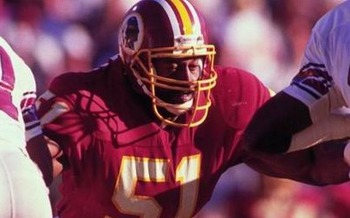 Coleman tallied 56.5 sacks, the team’s fourth-highest all-time total, and intercepted 17 passes, while being regarded as one of the top coverage linebackers of his day. Coleman also posted 15 fumble recoveries, 1,009 tackles (653 solo) and three touchdowns and is a member of the Redskins 70 Greatest Team.

Coleman was also better know as a member of "The Three Musketeers", a trio that consisted of Coleman, Neil Olkewicz and Rich Milot, all three where drafted in 1979 by the Redskins.

Obviously, we would strike gold if Robinson turns out to be anywhere near as good as Coleman was as a Redskins player (which is why I selected Coleman in our DC Legends Mock Draft).

Who does Robinson remind you of from Redskins past?