Redskins 2011 Offense Review: Second Half of the Giants Opener

Share All sharing options for: Redskins 2011 Offense Review: Second Half of the Giants Opener

You guys appeared to enjoy my post yesterday looking back at the first half of the opening game last year against the Giants. If you missed that post, click here to view it. So today I thought I'd move on to the second half of that game.

In the first half, we saw the Redskins run mainly to the left, attack the seams to the right and use the trips formation on the majority of third downs. Throughout the game, the running game stayed running left for the most part, so I'm not going to bother with that in this post. The Redskins went away from the trips in the third quarter. Instead they went to what appeared to be their 'Eagle' personnel group, with the 'Spread Right' formation. It closely resembles the 'Double Wing' formation in the 'Zebra' personnel group, so I could be wrong. But I know these words mean nothing to a lot of you, so here's what I mean. 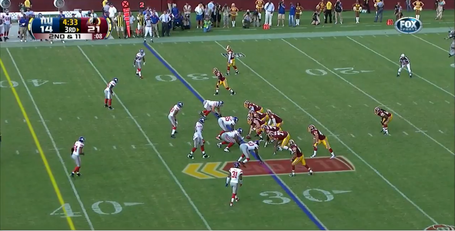 Notice that tight end Chris Cooley is lined up like a receiver, he takes the role of the 'Eagle' man in this formation. More on that in a minute. This particular play didn't work for the Redskins, but they came back with the same formation the next play. 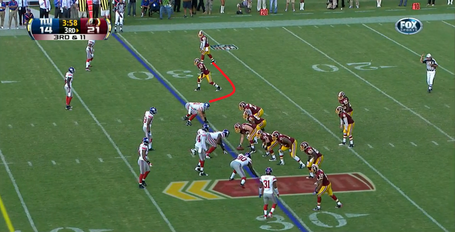 But this time they motion Santana Moss in short. On this play, we see a really good way to manipulate cover two defenses, which is what the Giants use on this play. Let's look at it on the whiteboard. 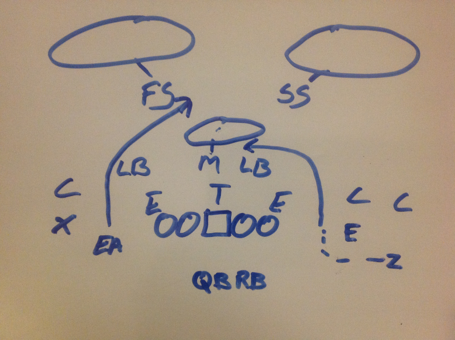 Coming back to a point earlier about Cooley being the 'Eagle' man. The Redskins cleverly use Cooley and fellow tight end Fred Davis as the 'Eagle' man in this personnel group. The defense thinks the Redskins are using three receivers and one tight end, but in actual fact they are running four receivers. This creates mismatches with the defense. But back to this play, and what you see on the picture above is a smart manipulation of the 'Mike' (or middle) linebacker. In a cover two defense, the two safeties are covering the outside deep parts of the field, while the middle linebacker drops to cover the intermediate middle of the field. So the Redskins run a route combination which forces the mike to make a decision. Moss runs a crossing route and sits just underneath the mike's zone. On the other side of the field, Davis runs a post route to attack the area just behind the mike's zone. The mike is then in a lose-lose situation. If he takes away the deep pattern, the ball goes underneath to Moss; but if he comes down to stop the underneath pattern, then the ball goes over the top to Davis for a big gain. On this occasion, the mike gets caught in two minds, and ends up not covering either. 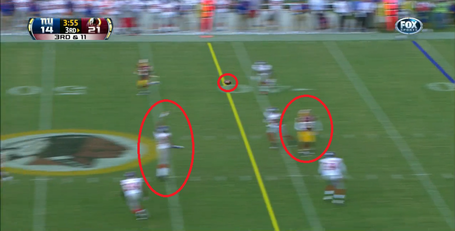 As you can see, the Mike was frozen in place, not really covering either Moss or Davis. Grossman takes advantage and fires over the outstretched arm of the mike. 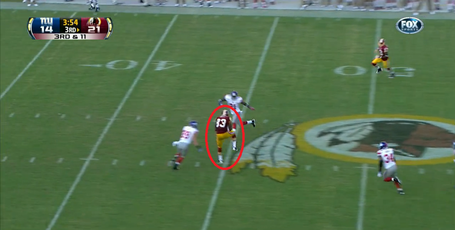 Davis makes the catch in between the two deep safeties, and the Redskins pick up a big chunk of yards on third and long.

Now I want to look at a one-off play, which was designed to take a deep shot early in the third quarter. 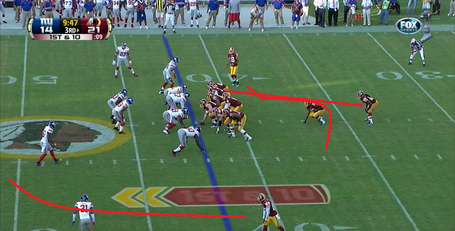 The Redskins call a play action, fake reverse with Moss running a deep post on the outside. 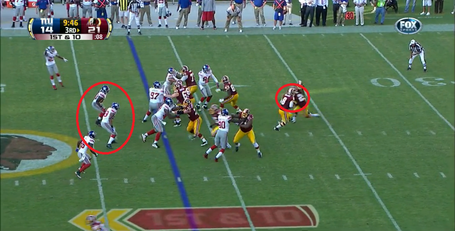 The first fake is to Tim Hightower. This forces the linebackers and safeties to freeze, just for a second, while they attempt to recognise the play. 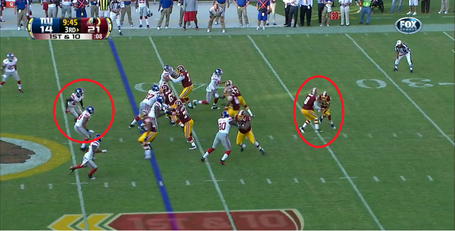 The second fake on the reverse once again freezes the linebackers and safeties. These two fakes together should have given Moss enough time to run past the safety deep, meaning he's one-on-one with the corner. 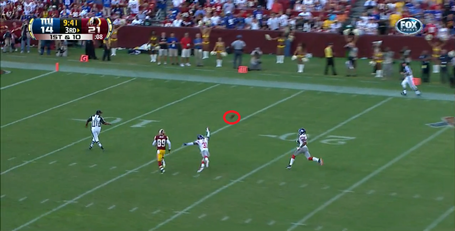 The corner was with him, but Moss had positioned himself in behind him. If Grossman had the arm to throw a few yards deeper, the Moss would have scored a touchdown. That's twice in this game Rex has missed a deep shot, and something we all expect Robert Griffin III to be able to do.

Back to the trends of the game, and I think it's fair to say that Trent Williams didn't exactly have his best half of football... 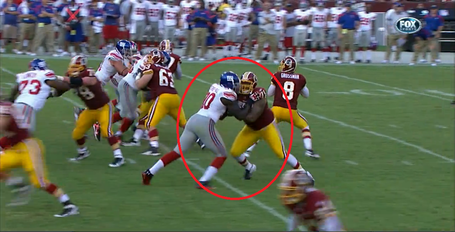 Now on this first play, Trent looks to have him in a great position. 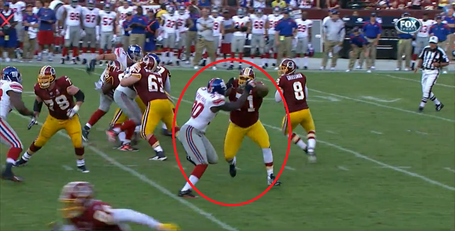 Trent even manages to get a decent shove in, which pushed Jason Peirre-Paul back. 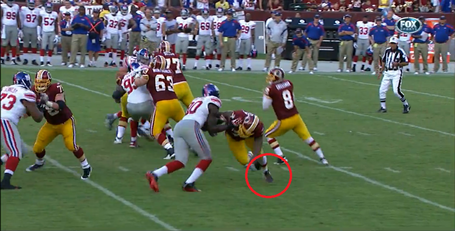 But as Trent goes to plant his foot after the punch, he slips. He completely loses his footing and falls over, allowing Pierre-Paul a free run. This appeared to set off a sting of bad plays for Trent. He was at fault for the sack which saw Rex fumble the ball and turn it over. 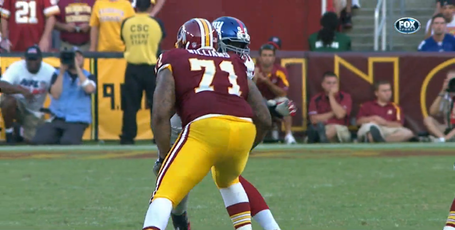 Straight away, Trent gets outside much too quickly. He creates a big gap between himself and the left guard, which gives the pass-rusher a quick inside lane to the quarterback. For a tackle, or any offensive lineman for that matter, you'd much rather be beat outside than inside because it's a long path for the pass-rusher. 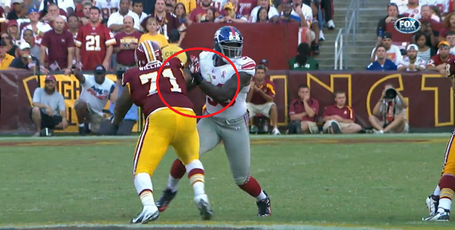 Of course, we all know Piere-Paul's qualities, and he's much too good to pass up on this error by Trent. He effortlessly clubs away Trent's hands and gets inside. 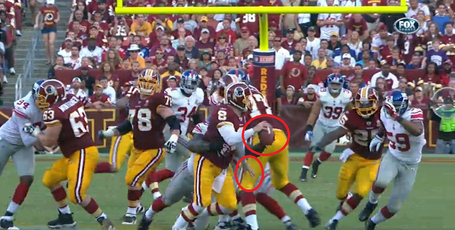 Pierre-Paul sacks Rex, but Trent can't be blamed for the fumble. Rex saw Pierre-Paul coming, turned and began to run. Yet he failed to cover up the ball with both hands, instead holding it away from his body.

Another formation the Redskins went with, was a tight end heavy formation. Here's a couple examples. 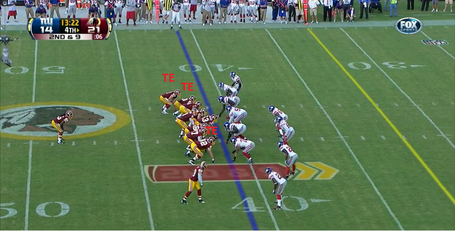 As you can see, there are three tight ends, Cooly, Davis and third string back-up Logan Paulsen all on the field. Moss is the solo receiver. But while they used this formation, they actually passed the ball from it, rather than the expected run. 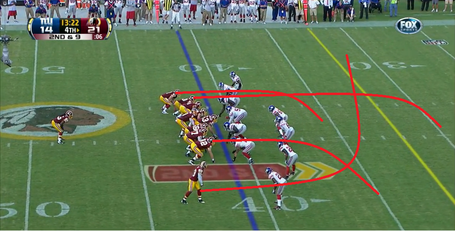 The route combination used here is designed to get the entire defense running one way, while Moss crosses against it in the other direction. But the first time they run it, they can't protect Rex long enough to allow Moss to run open. Take a stab at who one of the major culprits was? 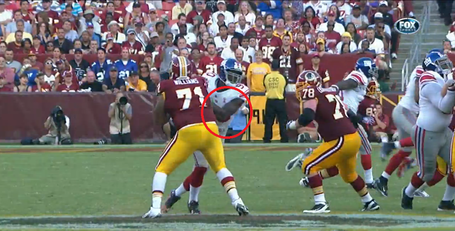 If you guessed Trent Williams, virtual internet cookies for you! Once again he over-strides to the outside, creating the gap between him and left guard Kory Lichtensteiger. Pierre-Paul once again clubs Trent's hands down and moves inside. 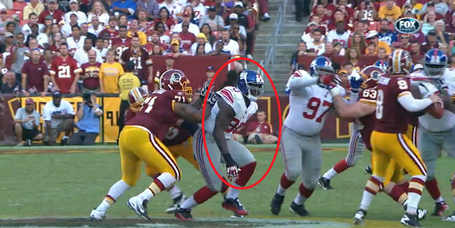 Lichtensteiger doesn't get over quick enough to help, and Pierre-Paul forces Grossman to throw earlier than desired. 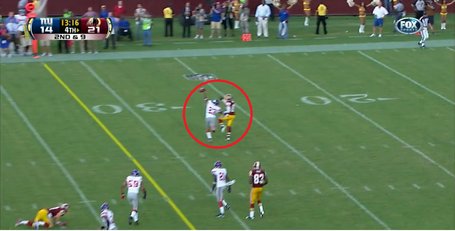 The pass is broken up by the corner, and nearly intercepted. But this doesn't stop Kyle Shanahan from going back to that formation, and even the same play. 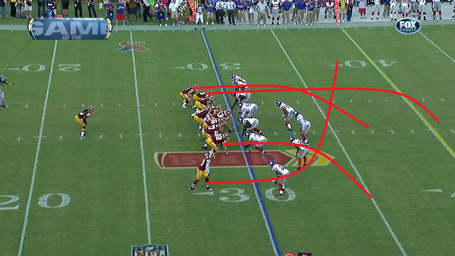 As I said, here we have the exact same play. 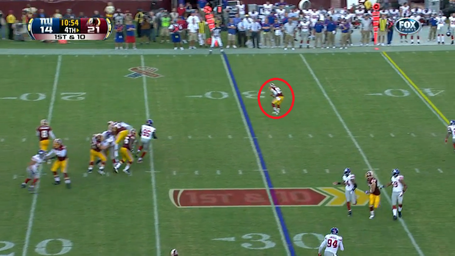 This time Moss runs free, and picks up a first down.

Perhaps somewhat oddly, the Redskins never called for a run play out of this formation. They did call for a quick pass underneath for Cooley once, and even a play action pass with the tight ends running crossing routes. But after various degrees of success with this formation, they went back to what worked for them in the first half, the trips. 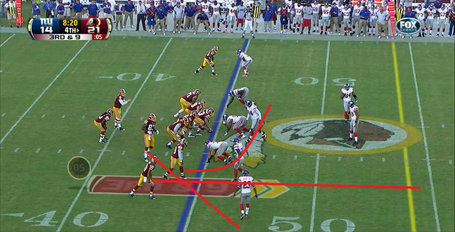 Davis motions from the other side of the field, into the trips. He's going to run an out route, Moss is running a shallow cross while Gaffney has a deep pattern. 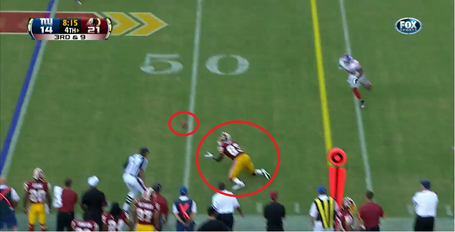 Grossman's arm strength, or lack there of, is on full display on this play. Davis has to dive back towards the ball to catch it. He manages to reel it in, but short of the first down marker. Luckily, the Giants get called for an unnecessary roughness penalty, giving the Redskins the first down. On the following third down, Kyle calls the same play (felt like I've said that before). 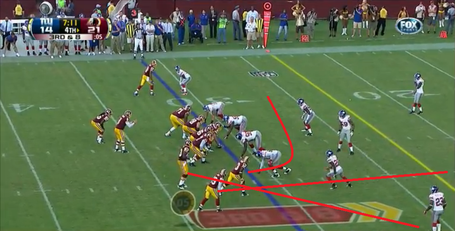 It's the exact same play. Davis motions into the trips and is the target on the out route. 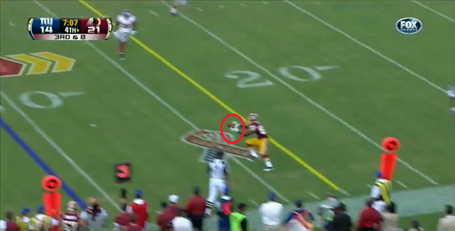 This time, Grossman manages to get the ball to Davis without any troubles. Davis is able to turn and run upfield, and fights his way well into the red zone.

I think I'll end this post on the same drive as those last two plays. On third and goal, the Redskins spread out the receivers. 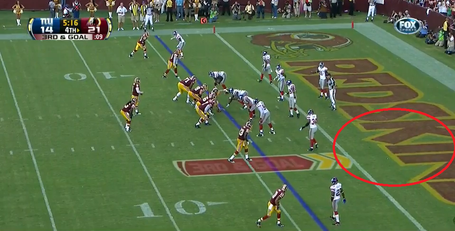 On the pre-snap read, Grossman can see the Giants have no safety cover on the near side. 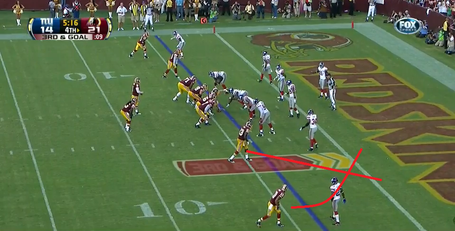 This is the perfect coverage for the Redskins. They have Gaffney running a slant, with Davis running an out. 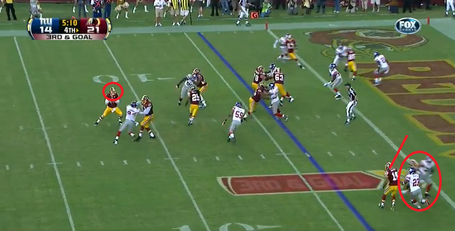 The route combination forces the corners into traffic. Gaffney makes sure to slip under the traffic, creating separation. With no safety to take away the slant inside, Gaffney is wide open. Grossman pulls the trigger and the Redskins kill off the game.

What were your thoughts on this game? What sticks out in your memory about that first half? Let us know in the comments below.