Redskins 2011 Offense Review: First Half of the Giants Opener

Share All sharing options for: Redskins 2011 Offense Review: First Half of the Giants Opener

This is potentially a new series of posts that I'm starting, should you guys enjoy this one. Basically, I'm going to review anything I noticed on the offensive side of the ball as I watch through the 2011 season again. Things like missed plays which new players would make, play-calling consistencies, good and bad match ups, game-plans and all those sorts of things. I will just say before we start, that these are solely my thoughts and theories, obviously I have no inside knowledge of the Redskins and what their play-calls/game-plans might have been.

One of the key principles of a west coast offense is that the running game and the passing game are complementary. By that I mean, the run helps to set up the pass, and the pass helps to set up the run. This was obvious in the Redskins first half against the Giants. They set up the passing game with their staple run play, the outside zone stretch. Now by now, we've all seen this play, so I'll only show you two of those. Notice that both are to the left side, more on that in a moment. 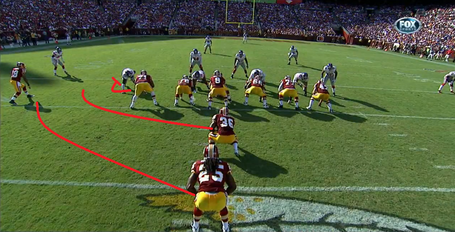 Left tackle Trent Williams will take a slide step to get an outside angle on the defensive end. He'll then block him off, allowing fullback Darrel Young to lead block the outside. 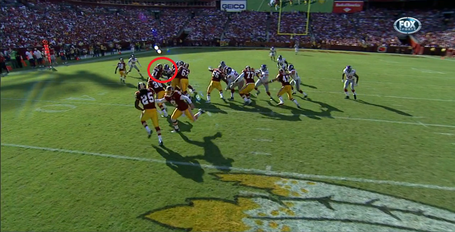 Trent has the inside of the play cut off before the ball has even been handed off. 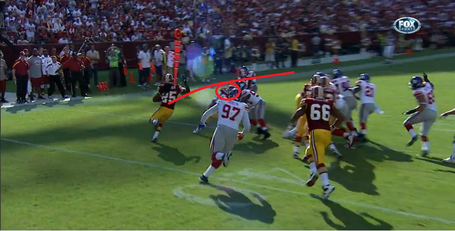 Young takes a block head on, again cutting him off inside. This allows Tim Hightower to run to the outside and make an easy cut upfield for a 16 yard gain.

Then we have Hightower's touchdown run. 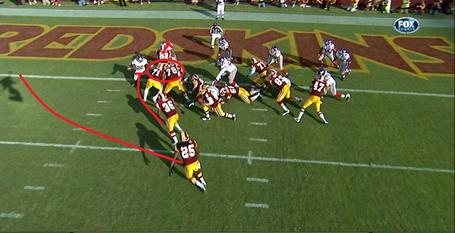 Once again its a run to the left. Williams and left guard Kory Lichtensteiger do a terrific job cutting off the inside of the play. Tight end Logan Paulsen gets to the second level to put a block on a linebacker, and Young takes the block of the remaining free defender. Hightower gets a free run to the outside for an easy touchdown.

These plays won't come as a shock to you guys, they are staple runs that you guys have all seen by now. I did point out that they were both runs to the left. The Redskins favored the stretch run to the left much more than to the right, I have two theories for why that is. The first being that Williams and Lichtensteiger are stronger at the point of attack than Jammal Brown and Chris Chester on the right side. A run to the left gives Brown and Chester an easier assignment, playing to the strengths of the Redskins offensive line. The second theory I have for it is that bootlegs for right handed quarterbacks are generally much easier when the fake is to the left. Rolling out to the right is far easier than to the left, especially for non-athletic guys like Rex Grossman.

Once the Redskins had called a couple of run plays, the Giants brought a safety up, meaning they had eight men the box. This left the Giants with only one safety to cover deep. The Redskins took advantage of this, attacking the vertical seams in the defense, particularly to the right side and in between the numbers. Here's a couple of examples. First they had Santana Moss, who attacked the seam and then sat down in a gap between zones. 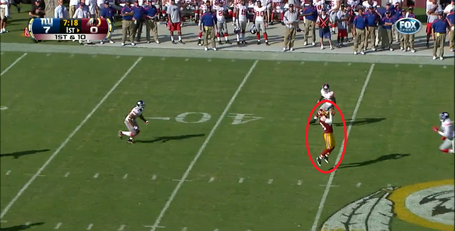 Then, Anthony Armstrong found the seam, but dropped the pass as the safety came down and hit him. 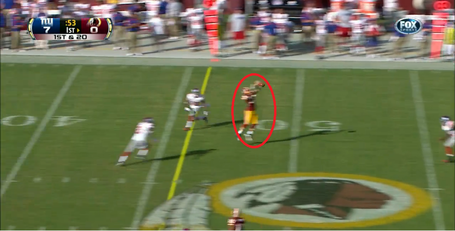 The final one I'll show you for now is from a formation that I noticed a lot of. Some of you may know it as 'trips' or 'bunch trips'. 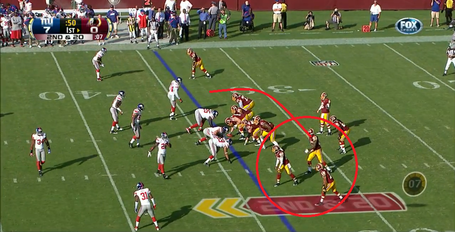 This formation calls for three receivers to bunch tight together close to the line, as you see in the picture above. Fred Davis motions out of it to the other side. 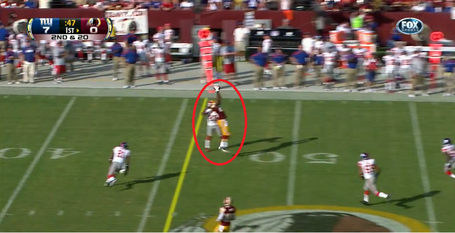 Once again, Davis attacks the seams and makes a catch, and the first down.

By attacking the seams, the Redskins force the Giant's to drop the safety back. With eight men in the box and one safety deep, the seams are vulnerable for a defense. When the second safety drops back, he can help cover the seam a lot better. But that means there is only seven men in the box, making it easier for the Redskins to run the ball. Remember how I said west coast offenses have complementary run and passing games? This is how the Redskins utilized it in the first half against the Giants.

Now attacking the seams can be achieved from multiple formations and personnel groups. I showed you a glimpse of the trips formation in the last play. But the Redskins used it a lot, especially on third downs. It felt like every third down they would line up with it, or motion into or even out of it. But whatever they did, it was almost always involved on third downs. 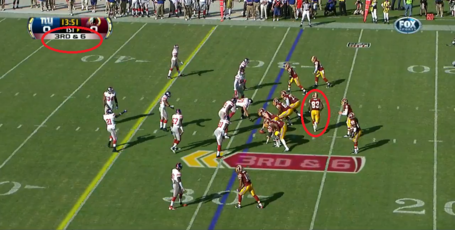 Here is the Redskins first third down of the game. Fred Davis motions from his tight end spot on the left side of the line, into the trips formation. 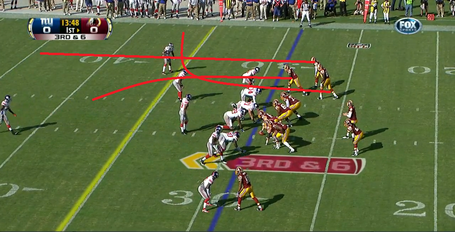 They can run various route combinations from this play, but usually you'll see one deep pattern, one outside route and one inside route. With three receivers so close all crossing against each other, defenders can get caught in traffic, or confused with who they are meant to cover. In this case though, Grossman is pressured quickly and can't complete a pass outside to Davis.

On a third down a few series later, they start lined up in trips, but motion out of it. 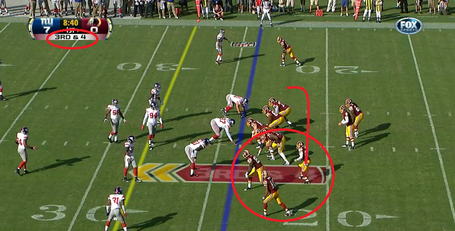 Santana Moss is the man in motion to the slot receiver on the far side of the picture. 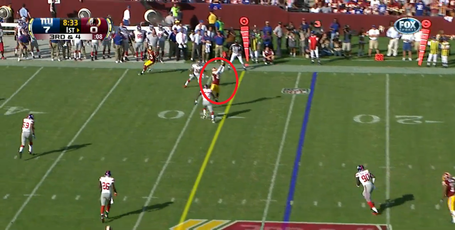 Moss runs a quick out route, catches the pass and gets the first down to move the chains.

This continued into the second quarter. 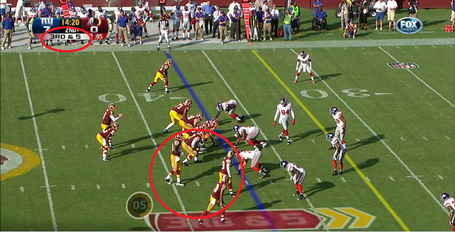 The first third down of the second quarter, they once again motion into the trips formation.

The next third down in that series, they motion into it again. 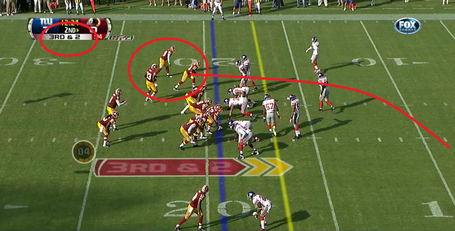 The trips formation is starting to draw the attention of the Giants. So they bring down both safeties to help cover it. This plays right into Armstrong's hands, as he runs across the middle. 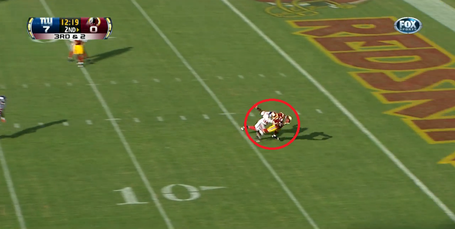 With no safety in the middle of the field to help, Armstrong is one on one with his defender. He uses his speed and route to get a yard on the defender. Grossman throws a good enough ball under pressure to complete the pass and set up that Hightower touchdown run you saw earlier.

To wrap up this post, I'm going back to the first quarter to look at a play that the Redskins got the exact look they wanted, and Rex just missed it. 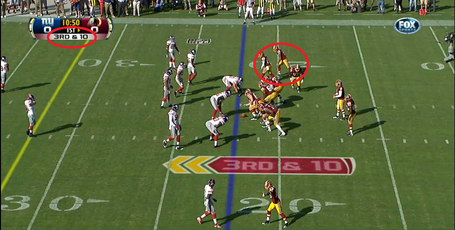 Once again, we line up showing the trips formation on third down. Davis motions out of it to join Hightower and Grossman in the backfield. 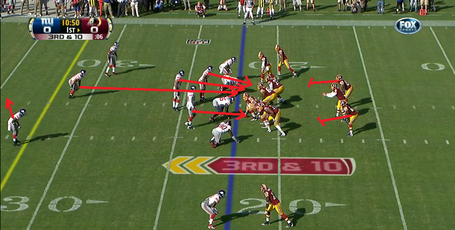 The Giants show a heavy blitz. They end up blitzing seven, with the Redskins keeping seven in to block. The Giants keep one safety deep and play man coverage on the three receivers. 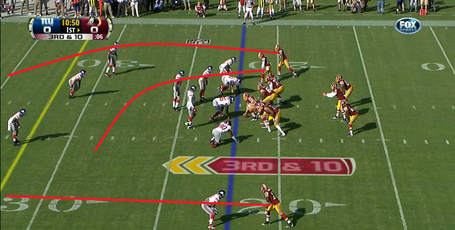 The one deep safety, man coverage look is exactly what the Redskins are after (again, they attack the seams in a single safety look). Gaffney is running a post route, Moss has a crossing route while Armstrong runs a go route. The route combination is designed to manipulate the safety. Let's look at it on the whiteboard. 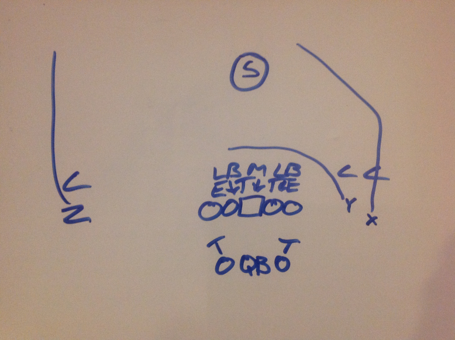 With two deep routes, the safety is effectively frozen in the middle of the field to be able to help cover either route. If he cheats to either side, he leaves the other corner completely on his own. The crossing route underneath also distracts the safety as it crosses right in front of him. So with the safety frozen, the post route instantly becomes the first read. Gaffney runs an excellent route, taking his defender wide, before cutting across him to get open. 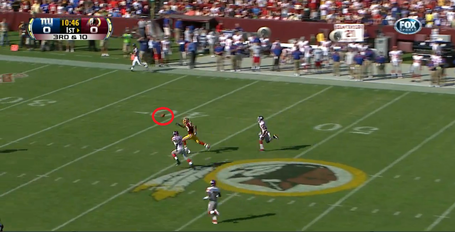 Grossman misses him. They had the play exactly as you would draw it up on the whiteboard, and Grossman just missed him. This is the kind of play that you would expect our new quarterback Robert Griffin III to make. He has the arm and deep accuracy to put the ball on the spot for the receiver to catch it in stride and take it for a touchdown. These are the plays that you absolutely have to make if you're going to win consistently in the NFL.

That pretty much sums up my thoughts and theories on the first half. I felt the key points to the Redskins offense were running to the left, attacking the seams (particularly on the right side) and using the trips formation heavily on third downs. If you guys like this point, then next time I'll look at what adjustments, if any, were made in the second half of this game.

What were your thoughts on this game? What sticks out in your memory about that first half? Let me know in the comments below.