How Well Does Alfred Morris Fit Into Redskins Zone Scheme?

Share All sharing options for: How Well Does Alfred Morris Fit Into Redskins Zone Scheme?

When the Washington Redskins drafted running back Alfred Morris with their sixth round pick, it seemed like the entire NFL reacted with "who?", quickly followed by "oh, another Mike Shanahan running back". But Morris is a little different to the normal Shanahan running back. He's a bruiser; a guy who loves contact, breaks tackles and is constantly fighting for extra yards. These traits aren't necessarily uncommon in a Shanahan back, but what is odd is that Morris rarely ran in a zone scheme in college. He was in a power scheme at Florida Atlantic, with a few sprinkles of zone running thrown in for good measure. Find any highlight reel of Morris on YouTube and you're guaranteed to see him ploughing over guys and taking lots of hits. But I scanned through all of that to find the occasional zone run to set a rough outline of his potential in the zone scheme for the Redskins. I came away with five different plays for you. 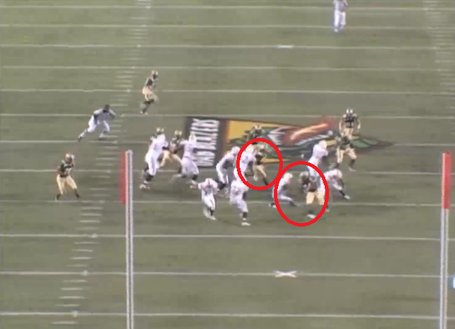 On this play, the offensive line does a poor job picking up the block and moving the defense laterally. Morris makes a very early read and doesn't hesitate to cut back quickly along the line. 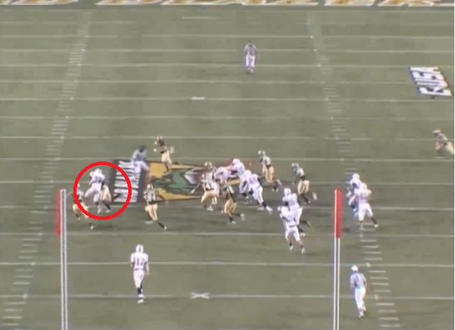 He breaks the tackle by the defender responsible for closing out the backside of the play. Morris caught him cheating to the other side, and maintains his balance to break free. He turned what looked to be a negative play, into a big gain. Instincts, decisiveness and balance were all key traits to this play for Morris, and are aspects of his play we'll see throughout this post.

This next play is a stretch run to the left. This time his blockers help him out a little. 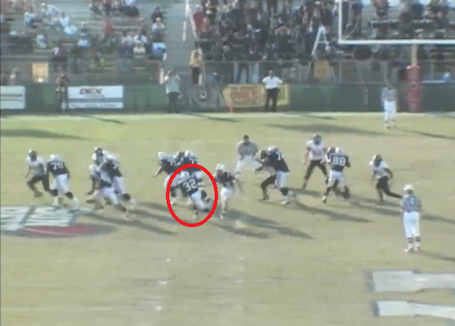 As he takes the hand-off, he can see two open lanes.

He shows patience, running with the line until he has to cut. One of the two lanes has closed, so he cuts back into the second one. 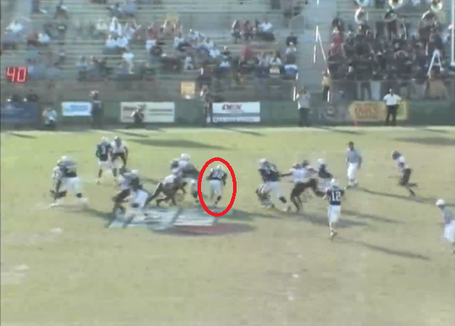 Thanks to some decent blocking up front, he has an easy hole to run through. He takes the run all the way down to the five yard line. 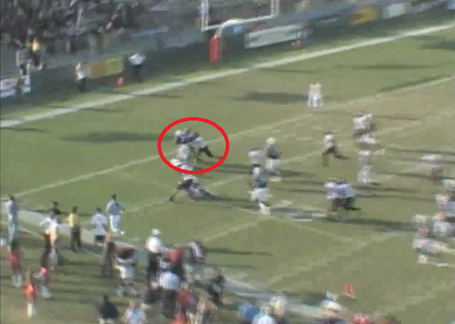 At the five yard line, he runs full on into a defender. As he's running over one, another defender latches on in attempt to save the touchdown. But their efforts go to waste as Morris pulls them both over the goal line. I liked Morris' patience on this play, he let his blockers set it up for him, and took what the defense gave him. He didn't try to create something out of nothing, he kept his discipline and it paid off.

Our next play has Morris taking a hand-off from the gun. It's a stretch run to the right. 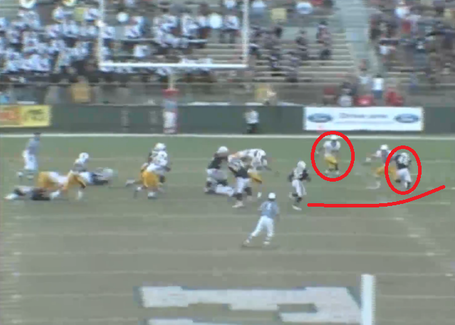 The defense does a good job on the inside to plug up all the lanes, meaning Morris has to continue his run to the outside. He spots the safety coming down to make a play, but realizes that the safety has taken the wrong angle to attack him. 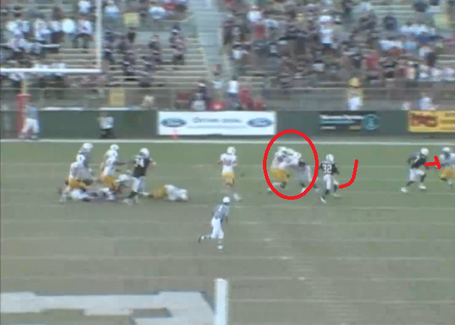 Morris uses the blocking receiver's position extremely well. He gets the defender caught behind that block, effectively allowing the receiver to block two players at once. Morris then gets an easy ride to the end zone for another touchdown. Similar to the last play, Morris stayed disciplined and allowed the play to develop rather than trying to force something inside. He kept his patience and took the run to the outside when nothing opened up inside. He then showed off his football IQ and was fairly opportunistic on some poor safety play.

Now we have another play where his offensive line doesn't exactly help him. 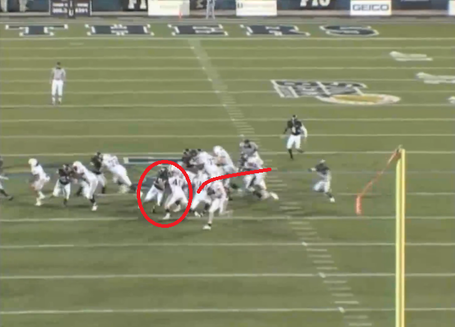 This was called as a stretch run to the left. But as you can see, a defensive lineman has completely blown up the interior of the line, forcing the fullback to take on the block early. Morris is unfazed by this, and makes a quick decision to cut back instantly. 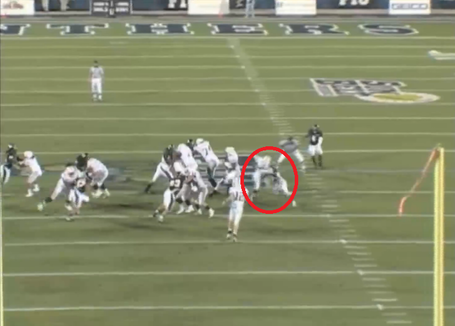 On this occasion, the backside defender held his position. But that's no problem for Morris, who runs through his tackle and somehow maintains his balance. 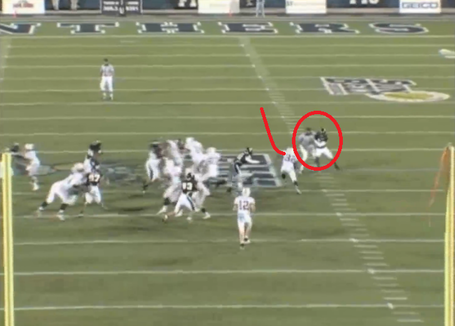 Morris is once again opportunistic as he uses the referee's position as a blocker. The defender can't get around the ref in time and Morris is in open field. He does get caught 10 or so yards further downfield, but it takes two players to bring him down.

The final play I have for you is another example of an instinctual cut, which works to perfection. 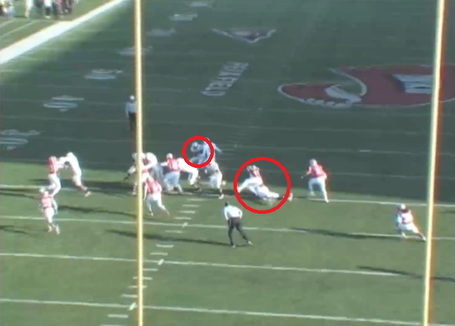 As Morris receives the hand-off, he makes a quick read of the defense. He sees a cut-block on the backside, which he knows will open up a lane. 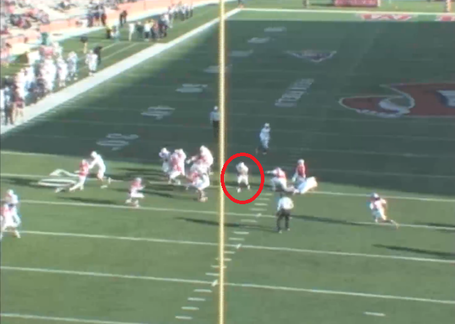 Having seen the lane before it developed, Morris cuts through it at the perfect time to go untouched while the defense is still moving in the other direction. 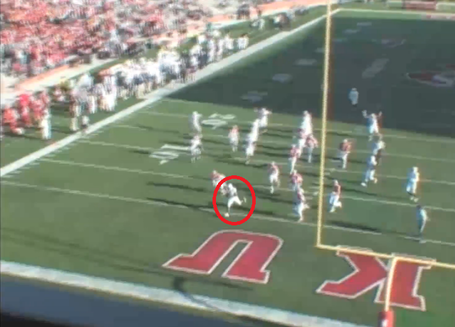 Morris takes it all the way for a touchdown, with pretty much the entire defense chasing him in the background.

In those five plays, you've seen some of the key qualities that all zone runners need, while also having a glance at some other things that make Morris particularly intriguing. His patience and discipline are something that all zone runners require. But his instincts, decisiveness and vision to see a lane before it opens aren't so common. I mentioned a couple of times that he was an opportunistic runner, and that he was unfazed by poor blocking. That was something he saw plenty of at Florida Atlantic, and he learned to stay calm and keep a clear mind while the line broke down around him. Bundle all of this together with his power and balance, and you have a guy that will be hard to cut.

Now before anyone thinks I'm building him up as the next Terrell Davis, I would like to clarify. He was playing at a fairly small school against weak competition. It remains to be seen how his game translates to the NFL level, where the speed is much faster, and the tackles are much harder to break. Plus he will have to show that he is capable of this in the zone scheme on a consistent basis.

What's your opinion on Morris? Do you think he fits the scheme? Will he make the team, or be the odd-man-out in a somewhat crowded backfield? Let us know in the comments below.