The guys over at the Washington Post put out an article on their website today about the changes Raheem Morris is implementing in the secondary. It's full of very interesting tid-bits, specifically about how pretty much everyone in the secondary is getting reps at both safety, corner and slot corner. I highly recommend you go and read the full article, but the part that stood out to me the most was what DeAngelo Hall had to say.

Meanwhile, Hall says he expects to take on a role similar to that of Green Bay’s Charles Woodson, who lines up all over the field depending on matchups, and covers receivers in the slot, on the outside and occasionally makes plays as a safety.

"You don’t ever see [Woodson] running down the field not looking for the ball," Hall said. "He’s always underneath, blitzing, having some type of zone coverage underneath so he can see the ball, using instinctive football ability under there, and that’s kind of what we’re doing."

Hall later added, "[Woodson] got defensive player of the year [covering the slot receivers], so hopefully I can get some of that same kind of buzz and excitement out there, making plays. I’m definitely relishing the opportunity to get in there. It’s hard, it’s different. But I’m down. It’s a lot more space. You definitely have to hone in on your technique and what’s asked of you in that moment, as opposed to just being a free spirit and only checking your guy. It definitely is a little bit different, but it’s part of the evolution."

So exactly what kind of role does Woodson play? I thought I'd take a look.

In standard two receiver formations, Woodson will line up as the left corner, or occasionally at free safety. But even as a corner, he's rarely thrown into man coverage. 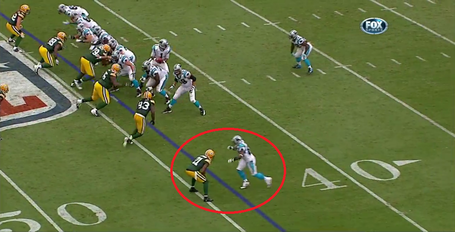 Here he's lined up in what looks like press man coverage against the Panthers receiver. 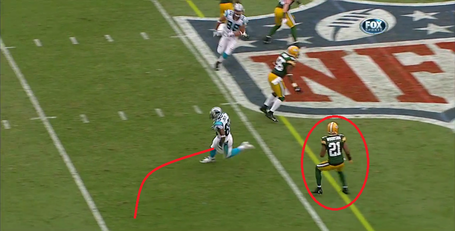 But he breaks off the route and looks to either pass the receiver onto the safety, or sit in the zone (Editors note: this is why writing about coverage is incredibly difficult, only the players and coaches know exactly what the call was there, but to the rest of us, it could have been a number of things). 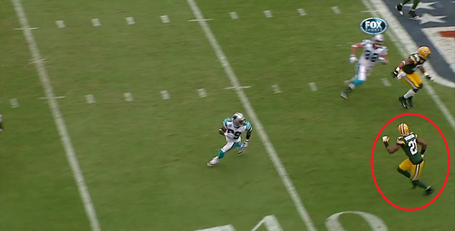 As Hall said, Woodson constantly has his eyes on the quarterback. He notices something and begins to chase after the receiver again, having let him go previously. 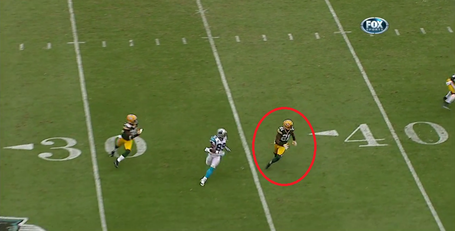 He then undercuts the route (as DeAngelo loves to do). 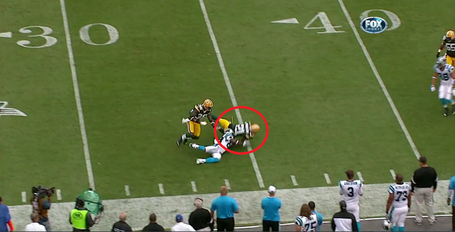 And makes the interception. If it's true that Hall is looking to play a Woodson role on the Redskins defense, then this is the type of thing to expect when he plays the outside corner position. Rather than the focus being shutting down the receiver, the focus will be on the quarterback's eyes, with Hall in some sort of a zone coverage or with a safety over the top to help, just as the Packers had in the play above.

Where Woodson comes into his own is in the slot. I can see Hall pulling off plays like these next two as a slot corner. The first is in man coverage. 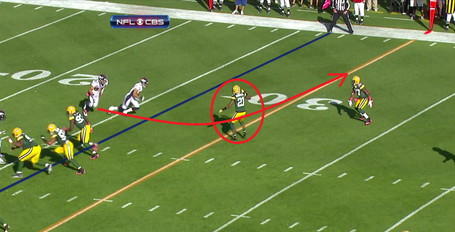 As the outside receiver motions inside, Woodson quickly signals to the outside corner to swap the man they are covering. 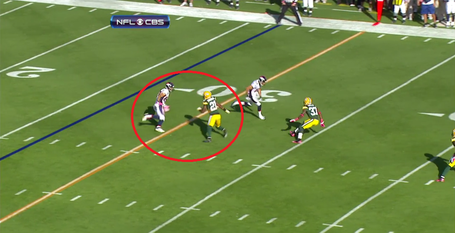 As the receiver begins his cut outside on a quick out route, Woodson has already started to jump it. 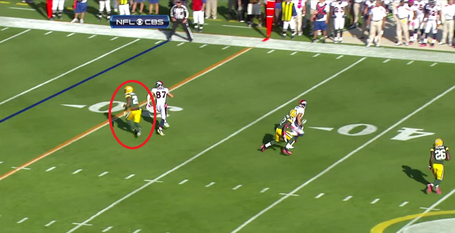 Woodson is in full on ball-hawk mode. As the receiver has finished his cut, Woodson is already in position to undercut the throw and make the interception. He doesn't have to worry too much about getting burned on the play, because he knows it's only a quick out route. The worst that can happen is he misses the pick, the pass is complete, but the receiver is tackled three or four yards up the field by the other corner, or the safety over the top. 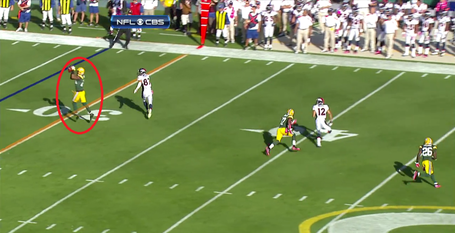 Needless to say, Woodson made the interception, and he ended up taking it 30 yards the other way for a pick six. We know DeAngelo Hall has the instincts and desire to jump routes and make big plays. As a slot corner in man coverage, the majority of the routes he'll face will be short routes. That leads to less of a risk if Hall gets beat. As I said before, the worst that will happen is that another man in coverage, or the safety over the top will come down and have a chance to make a play with relatively little harm done.

Woodson also spends time in zone coverage, while lined up over the slot receiver. This is the second kind of play that I can see Hall making as a slot corner. 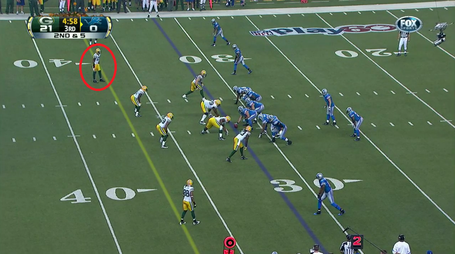 I've circled Woodson, who is lined up over the slot receiver with a good ten yard cushion. It looks like man coverage. 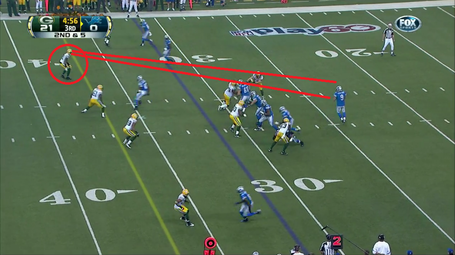 But in actual fact, Woodson is sitting in a zone. His eyes never waver from the quarterback, even as the slot receiver breaks to the sideline. 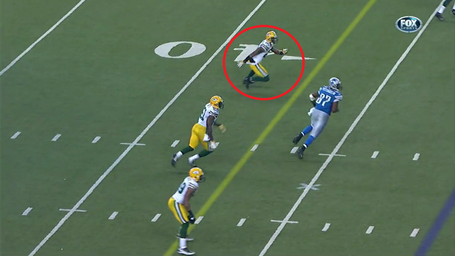 Woodson's ball-hawk instincts take over again, as he drives to the ball before the receiver has even finished his cut and fully turned his head back around. 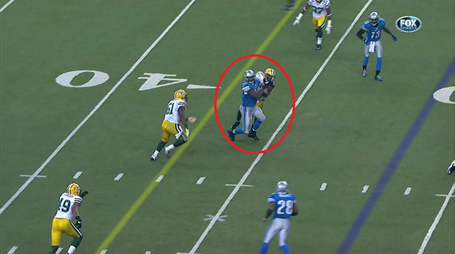 Woodson arrives at the same time as the ball, but his momentum carries him through the play and he comes away with the interception. Again, this is the kind of thing I think Hall would thrive on. Sitting in a zone, not having to worry too much about getting beat. He can watch the quarterback and let his instincts take over.

We've heard how Woodson had to be versatile. In this next play, Woodson was originally called to cover deep in the fashion of a safety. But after a fake snap by the offense gave away the blitz, the packers audibled sending Woodson on a blitz (I've included this play more because I love what a Dom Capers defense is capable of, but I'll work it back to Hall in the end). 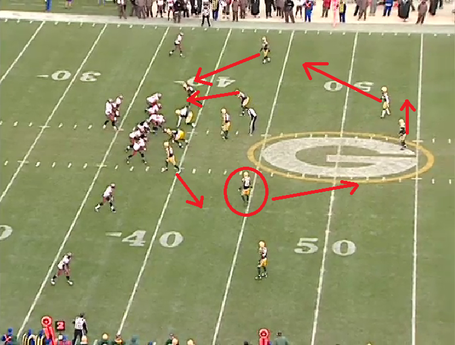 Here we have the original play, it looks pretty complicated so let me explain. The blitz is designed to attack the left side of the offensive line. The corner on the far side is going to blitz, along with one of the linebackers, in attempt to overload the left side of the line. To cover the blitzing corner, one of the safeties is going to rotate down to the open receiver, while the other safety will rotate across to fill the gap left by the first safety. Clay Matthews was scheduled to drop back and cover the slot receiver, allowing Woodson to drop further back and act as a safety. Get It? I hope so because it only gets more complicated. 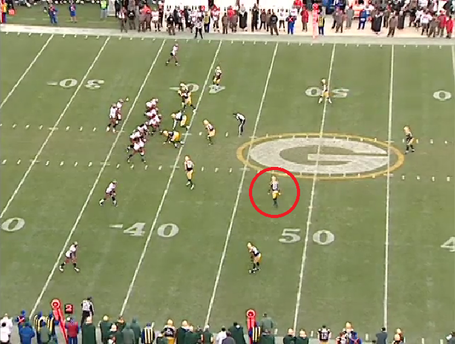 Josh Freeman fakes the snap, and catches the defense while they were rotating and adjust accordingly. 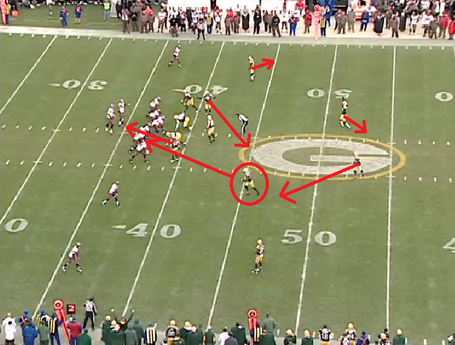 So the Packers audible out of it and send the blitz from the other side. Woodson and Matthews are sent on the blitz, while the other players rotate to cover the gaps in the defense (as demonstrated on the picture above). 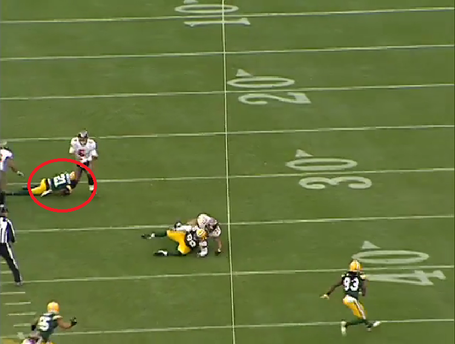 The Bucs weren't ready for the blitz to come from that side, and Woodson breaks through the protection, sacking Freeman. (Remember when I said I would link this back to Hall, well here's my best attempt.) Hall's speed would certainly be a positive factor when blitzing from the slot. However, I struggle to see him getting off a block should the offensive line pick up the blitz. I also wouldn't be entirely comfortable having DeAngelo acting as a safety and the last line of the defense, as Woodson was originally called to do on this play. (How was that for linking it all back to Hall? Good enough to justify breaking down that one play?)

So what do you think. Would a Woodson-style role help Hall improve his play from his last few years at the Redskins? Or do you think I'm talking a load of garbage and it would be too much for Hall to handle? Let us know in the comments below.