With Robert Griffin III The Redskins Bootleg Options Are Endless

Share All sharing options for: With Robert Griffin III The Redskins Bootleg Options Are Endless

We've heard so much over the past couple of months about how Robert Griffin III is a perfect fit for the Washington Redskins. His mobility and arm strength would appear to work nicely with the high amount of play-action bootlegs traditionally seen in a Mike Shanahan offense. But what exactly can we expect to see from the Redskins from their bootleg game?

This post builds somewhat on the post I did earlier this week about Pierre Garcon playing the X receiver. You guys in the comments and on twitter asked me to build on some of the things the Redskins could do on play-action bootlegs. So here's a look at some of the routes you could see from the Redskins.

First we'll start with the fullback. 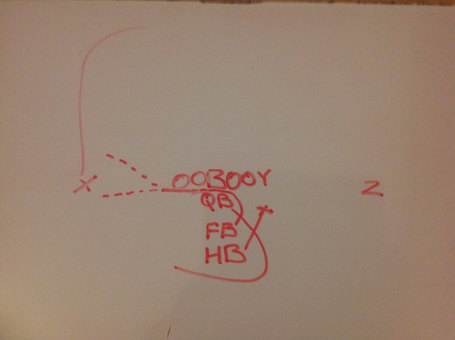 This is pretty much the standard bootleg play you'll see from a fullback. It's set up to look like a run, but the fullback slips back across the offensive line and out into the flat. From there, he can continue to run into the flat, or break up the field slightly. Either way, he's likely to run free as the linebacker assigned to him buys play-action. The upside of this route is that it will likely always be an option. However, it will rarely pick up more than five or so yards unless the fullback can break tackles (which credit to Darrel Young, he can).

Next we'll move across to the X receiver. 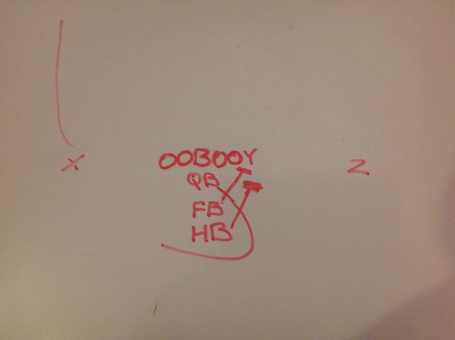 The most obvious route for the X to run would be a pure go route. This will only work if the corner and the safety bite on the play-action. If they do, the receiver fly's past them and it's an easy touchdown. If they don't, RG3 will have to check it down. 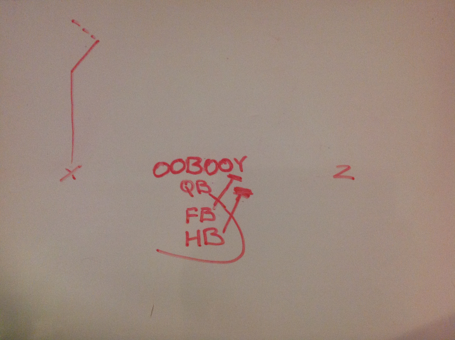 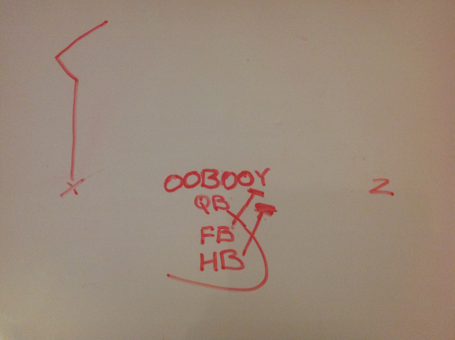 These two plays give the X receiver a chance to beat the corner or safety should they not fall for the play-action. On a go route, if the defender stays with the receiver, that route is taken out. But with either of these two routes, the receiver has a chance to make a cut, thus giving him the opportunity to cut open downfield. The problem with these routes arises with the amount of time needed to run them. On a bootleg, Griffin will only have so much time he can wait for the receiver to break open downfield and will have to check it down if he has a defender rushing him.

So an alternative for the X? An out or comeback route. 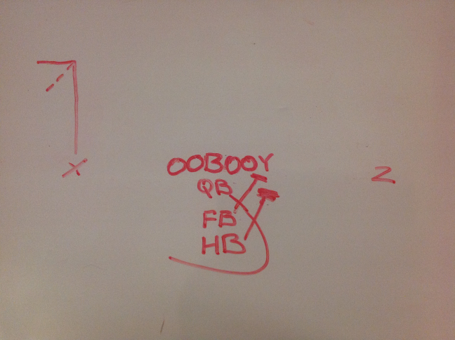 When Griffin roles out to the X receivers side, a nice route for the X to run is an out or comeback route. This is incredibly hard to defend. If Griffin is in sync with the X receiver, then the timing should mean a corner can't make a play on the ball unless he's cheating on the route. These routes will break at 15-18 yards downfield, and should hit the receiver as he makes his cut. That means RG3 will have to anticipate the receiver breaking open on time. But as I said, if he can, it's extremely difficult for anyone but the receiver to make a play on the ball. The downside of this route is that it will rarely go for anything more than the 15-18 yard cut point as the receiver will be tight to the sideline and is easy to push out of bounds.

Moving over to the Z receiver on the far side of the field. On the plays I've drawn up, I have Griffin bootlegging to his left, which means the options for the Z receiver are limited. 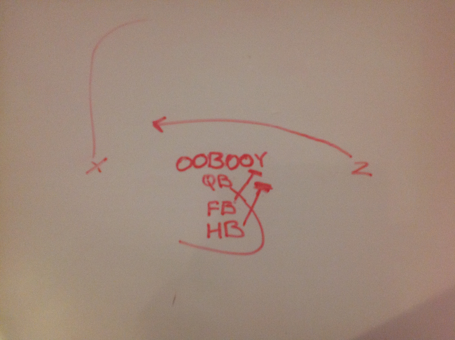 The first, and most common, is a crossing route. This can be run at different depths. It could be run just a couple yards off the line of scrimmage, making it an "under" route. Alternatively it could be run deeper, maybe 8-12 yards from the line of scrimmage. That kind of a deep cross would usually be accompanied with another, shallower cross (or under). This could come from the tight end, or even the fullback like we saw earlier. These Z crosses will be second or third on the list of progressions. The deep route will come first, followed by the deepest cross, then an under.

A huge benefit of crossing routes on bootlegs is that they are running against the defense. In the play above, the defense will be initially running to the side of the run. While they are doing that, the Z receiver runs past them. This can cause the corner in coverage to get caught in the traffic of his own defense. Once the defense recognizes the play, they have to stop there momentum and run back in the other direction. But the Z receiver never loses a step and uses the time taken by the defense to change direction to create more separation. This makes crossing routes very hard to cover on bootlegs, hence why we see them frequently.

Here's another option for the Z receiver. 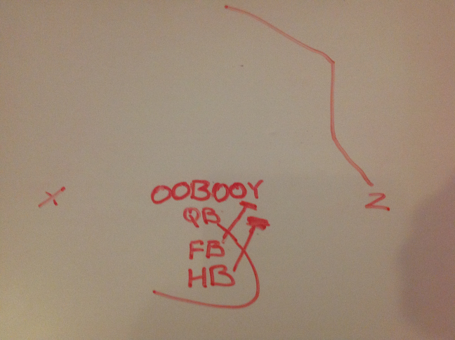 This is a nice deep route to have on the backside of a bootleg. It eventually has the same effect as a post route, where the Z receiver makes a deep cut towards the middle of the field (or the goal post). But here, his initial movement takes him inside, almost as if he's going to run a crossing pattern. If the defender is cheating on the cross, the cut upfield will buy the receiver a yard or two. If you're going to run a deep route on the back side of a bootleg, it has to be something like this to get the receiver into the middle of the field. That way, the quarterback can avoid throwing back across the field too much (throwing back across the field leaves the quarterback very prone to interceptions).

Finally we move to the tight ends. I've switched to a tiger personnel group, where the U (the second tight end) takes the place of a back. Just for the sake of it, I have the bootleg running to the right. 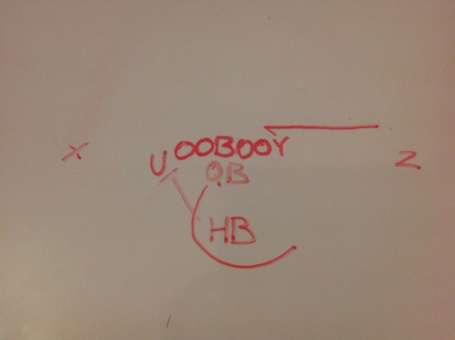 This is an extremely common route off of play-action bootlegs. The tight end blocks down on the defensive end before cutting outside on a quick out. This would be the under route on most plays, but could also be used to get the ball into the hands of Fred Davis and give him the opportunity to get yards after the catch as he does so well.

You can also look for the Y to run the occasional deep pattern. 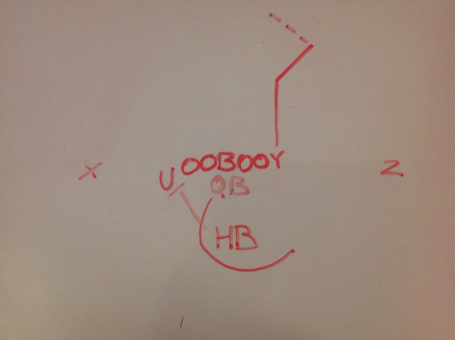 This is a route I'm expecting to see pretty often this year, particularly with Davis. A corner route off play-action bootlegs can be deadly from the tight end. Davis causes mis-matches as it is, but throw in the factor of play-action and this could be a big play for us. I've drawn on the possibility of a corner-post, but I don't really expect that to be run often.

From this formation, the U will most likely do one of two things. 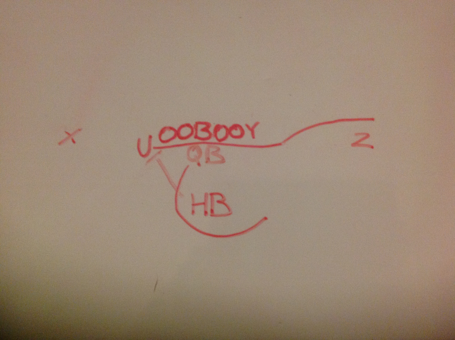 (Apologies for the shadow on the picture, getting light at 1:30 in the morning isn't as easy as you might think.)

The first thing the U could do is slip back across the offensive line and run into the flat. This is similar to the play we saw earlier from the fullback. It's the kind of route I said I'd expect to see from Niles Paul while he adjusts to the tight end position. Again, it would act as an easy completion for a free couple of yards, or a check down from a deeper route.

The other thing I'd expect from the U man is a cross of some sort. 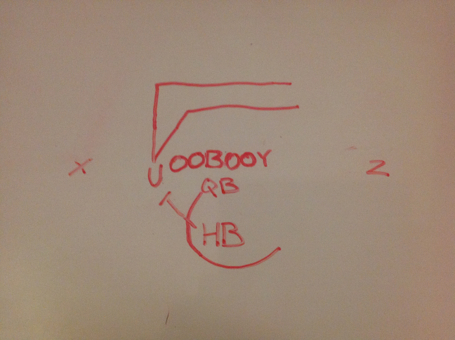 This could be in the form of a shallow cross, or an in route. Either route has a similar effect and would probably act as the second read in the progressions.

One quick edit that I wanted to throw in this morning before I went off to cricket was something some of you mentioned in the comments. On pretty much all bootleg plays, RG3 will have the option to keep the ball and run himself. I wouldn't want him doing it too often because that would leave him vulnerable to multiple hits and injuries. But on occasion, it would be stupid not to let RG3 run himself and use his mobility to pick up some yards.

That's about all I've got for you guys. Hopefully some of this made sense, but Im writing at 1:30AM right now because I'm busy at cricket tomorrow (don't judge me...). What routes do you like the look of? Which would work best in combination with each other? Let us know in the comments below. Also feel free to leave suggestions of stuff you'd like to see drawn up on the whiteboard next week.