Sights and Sounds from the Redskins Draft Day Party

Share All sharing options for: Sights and Sounds from the Redskins Draft Day Party

One of my favorite days of the year is the Saturday of the NFL draft. The way the draft is structured now, it's now a weekend long party. Thursday night for the first round of course we had the kick-ass party, Friday night I don't recall what the hell I did, and Saturday I made my way to Fedex Field at 10AM for some pre-late round draft tailgating. The folks at Extreme Skins arrived there at dawn to put their 90 lb pig on the roast. The beer bong table was up and running and the band was setting up. After the jump are all the pictures I snapped including some video interviews and amazingly spectacular jersey fails.

First up is video of RG3 running on Fedex Field for the first time and singing HAIL TO THE REDSKINS with the fans. Jump to the 2:00 mark:

Here's my FG attempt at Fedex Field...I got good distance on both the kick and my shoe.

Reverend Redskin has a mini lecture for Redskins fan...I'm pumped.

The pig at the Extreme Skins tailgate.... 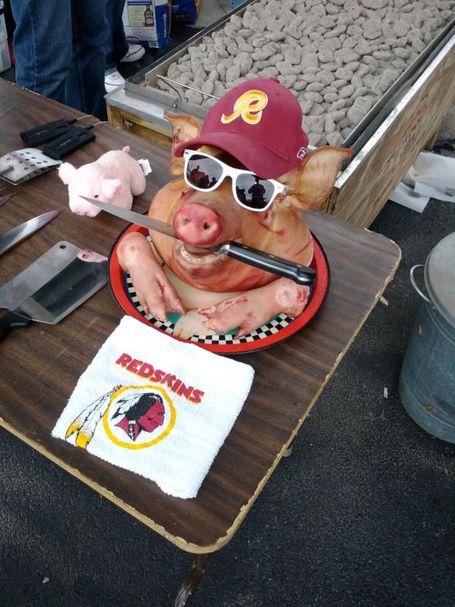 The scene outside the Redskins team store...RG3 jerseys were on sale for $115. The most popular buys seemed to be all the old Reebok jerseys on the clearance racks. Cooley and Moss ones were $29-$39. I wanted to buy a Haynesworth one for $9.95 but the line was way too long to wait. 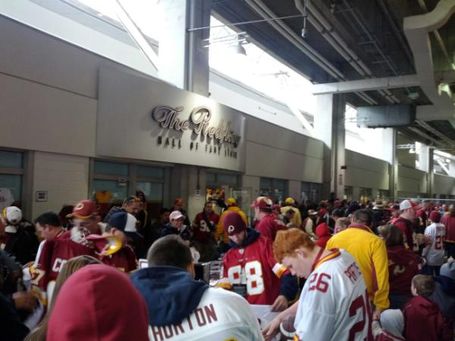 Meet Samu....the largest Redskins memoribilia fan out there. He has game programs for pretty much every year of the team's existence dating back to the late 1930s and got to spend time living the late, great Sammy Baugh when his friend was helping pen 33's biography. 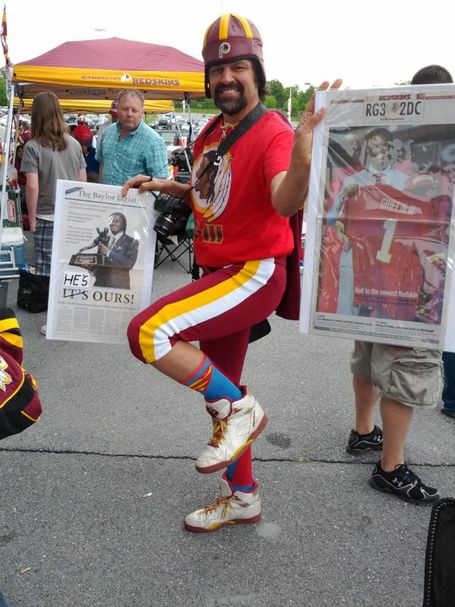 This is the scene at Fedex still early in the day (two and half hours before RG3...that's Pierre Garcon at the mic there in the tent!!!!) 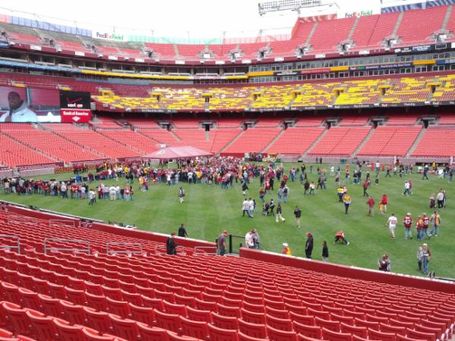 This has to be one of my favorite Redskins jersey fails of all time. 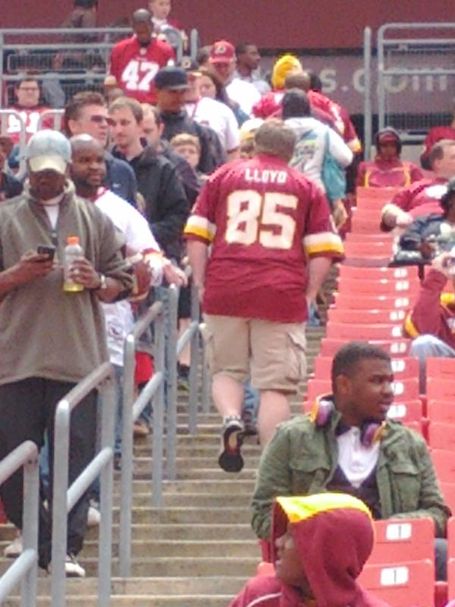 Now...this would not be the jersey of choice to welcome a new Redskins QB draft pick. (Of course, Frerotte was drafted same year the Redskins drafted Heath Shuler). And his girlfriend has the oh-so-vintage Lav Coles jersey. 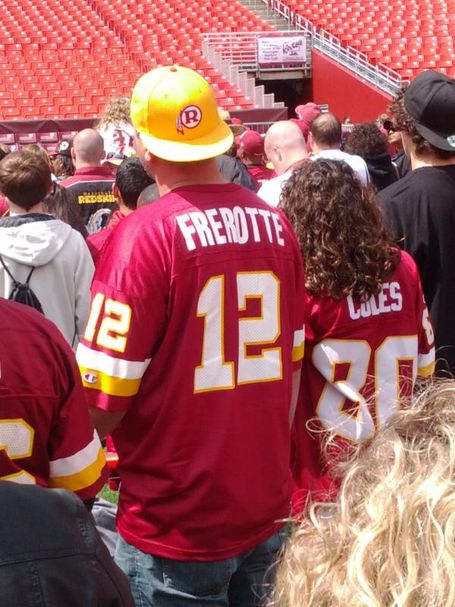 The Redskins are not just redoing the upper deck (notice all the seats ripped out behind the green fence), but the end-zone loge suites will now be game day suites that any one can buy. Smart. (no sarcasm there). 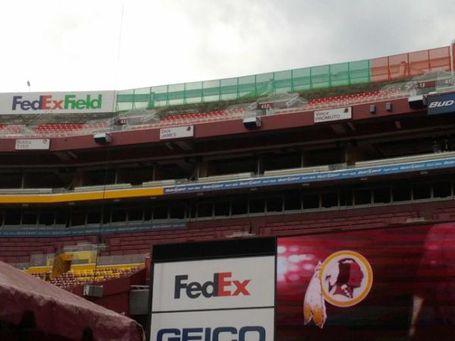 The scene right before RG3 came out. 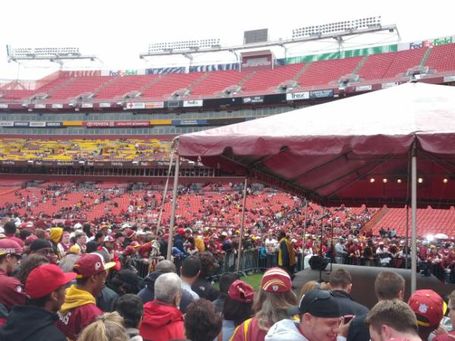 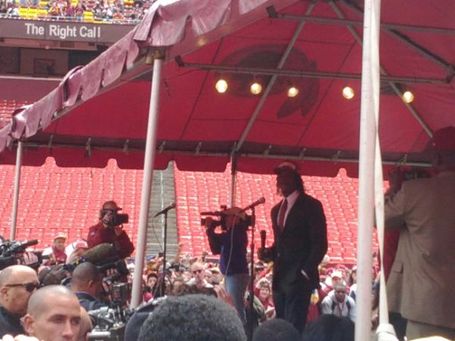 Doc Walker broadcasting live. When I walked by he said he would have thrown up if they drafted a WR with all the other team needs and then began praising Anthony Armstrong. 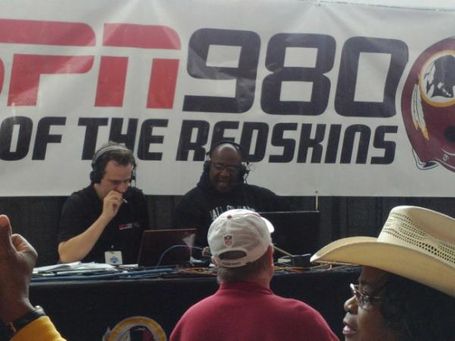 The Redskinettes...this picture doesn't do justice, but believe me, they are hotter this year then they've ever been. 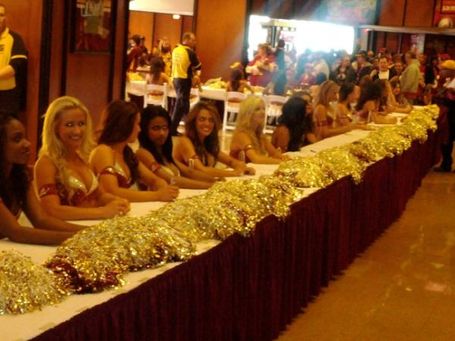 And why not...here's picture of me with a Lion...I presume it's for Madagascar 3 promotion. I do find it funny he had to wear a media pass. 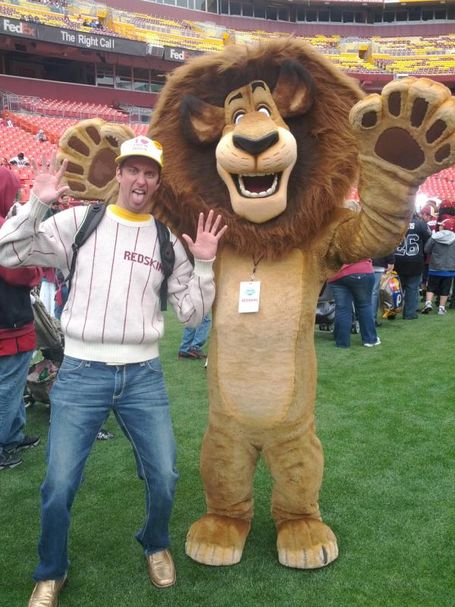