This is a new post idea I had where I thought I'd try to break down some west coast offense plays or concepts. I'm going to start with the same play Steve Mariucci broke down with Robert Griffin III at the combine. A lot of us saw that video and fell in love with Griffin, but didn't fully understand the play in question. So here is my best attempt to break it down for the those of us out there who don't understand football terminology (I am by no means an expert on the subject, so if you see a mistake feel free to point it out).

So lets have a simple first look at the full play, it's called "Brown Right F Short 2 Jet Flanker Drive". 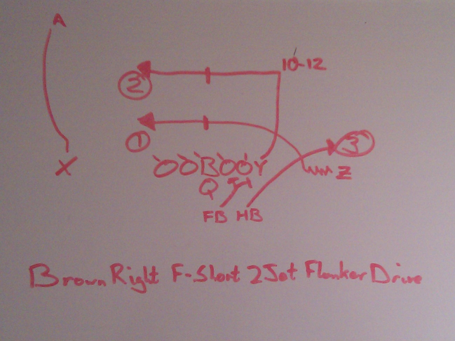 Looks like just your average play on Madden, right? Not quite...

We start with the personnel grouping. Before every play, the offensive coordinator will choose a personnel grouping and substitute certain players on the field for different groupings. This particular play happens to be run from the 'Base' or 'Regular' grouping, which is the personnel group that is most commonly used by a west coast offense. The Base/Regular group contains two backs (a fullback and running back), two wide receivers (the 'X' and 'Z' receivers) and one tight end. 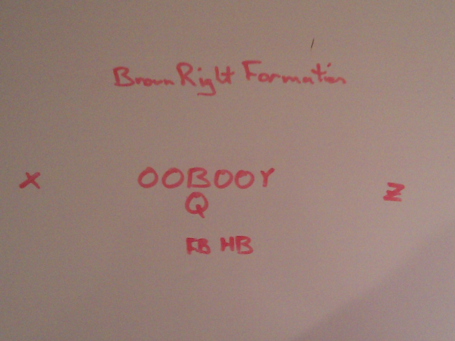 In the Brown formation, the fullback lines up directly behind the quarterback, while the running back is off-set to the right of the fullback. The tight end lines up on the right side of the line, making that the strong side.

After the formation, you call any motions involved in the play. In this case, the motion 'F Short' is called. This is a simple call that tells the flanker (F) to motion inside closer to the tight end before the ball is snapped. This is represented in the first picture as the initial part of the Z receivers route.

Then the protection is called. This play calls for '2 Jet' protection. Here's what it looks like from this formation. 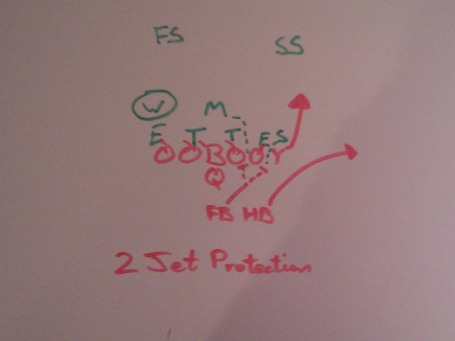 The '2 Jet' (or 3 Jet) protection is the most common protection scheme in the west coast offense. It's a six man protection scheme that can be used from multiple formations. In an ideal situation, 2 Jet protection allows the offense to block four to the Will. Simply put, the four offensive lineman on the Will's (weak-side linebacker) side will slide/zone block to that side. In the picture above, you can see the Will backer circled in green. The four closest lineman, the left tackle, left guard, center and right guard should all slide/zone block to that side.

This leaves the other two blockers, the right tackle and fullback, to block the strong side of the line. The right tackle will usually block the defensive end lined up over him. The fullback has to read the other two linebackers before he makes his block. In the picture above, the Sam (strong-side linebacker) is lined up in man coverage over the 'Y' receiver (the tight end). In this scenario, the fullback would come inside and block the Mike (middle linebacker). However, the defense could call for the Sam backer to blitz and the Mike to drop back to cover the tight end. In that situation, the fullback would go outside and block the Sam.

Once the protection has been called, the routes follow. For this play, we have a route combination called "Flanker Drive". As Mariucci explains in the video, 'Flanker Drive' calls for the flanker (in this case, the Z receiver) to run a 'shallow cross', an underneath crossing route. But as a part of the route combination, the tight end also runs a 10 to 12 yard 'In' route.

On this route, the tight end is coached to get an outside release. This is where he gets himself to the outside shoulder (outside being closer to the sideline) of the defender covering him. The reason being, if the tight end gets to the outside, it can cause a lot of traffic in the same area as the flankers shallow cross. This could cause a natural pick (basketball fans will know what I'm talking about), where the defender covering the flanker could get blocked by either the tight end or another defender, creating separation between the flanker and his defender.

The flanker and the tight end are running their routes on the same principle. If the defense is in zone coverage, they both will break off their route in the middle of the field and sit in position. If the defense is lined up in man, both routes carry on running across the field. The running back will also run a quick out route coming out of the backfield.

The progression for the quarterback to read through is shown in the first picture. His first read is the flanker's shallow cross. His second read is the tight end's in route. His third read is the running back's quick out, although this can be used as the 'hot read' if the defense sends a big blitz.

The X receiver in this play can be largely irrelevant. He's not even factored in to the original progression for the quarterback. On a Flanker Drive play, the X receiver can be called to run any route desired. But as it's not in the original progression, it's usually called for a 'Go' or 'Vertical' route, as I have done in the first picture. Even though this route isn't in the progression, it's an 'Alert' route, meaning it can become the primary read if the quarterback likes the look the defense gives him. So in the example we have above, the X receiver's go route would become the first read if the quarterback see's one on one coverage with no safety help over the top.

So there you have it. Hopefully it wasn't too confusing and hopefully I didn't miss anything out.